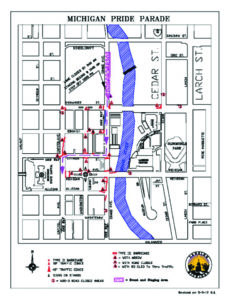 This year Lansing is celebrating Pride hard and providing dual ways for those interested in being politically active or celebrating the hard-won gains the LGBTQ community has fought for in the last half-century or so or even both.
“Michigan Pride is a statewide celebration that commemorates the equality achievements of the LGBTQ community while calling attention to what still needs to be done,” wrote event organizers.
On Saturday, June 15, attendees can make their way down to the Michigan Pride Parade and Rally set to begin at stages in Adado Riverfront Park at 11 a.m. which will lead to a rally at the state capitol. There, guest speakers like Michigan’s first openly gay Attorney General Dana Nessel will make an appearance and the event will conclude at 2 p.m.
However, Pride attendees can also make their way to Old Town right at noon to enjoy the Pride Festival that will last until 10 p.m. that evening. There, performers like drag queens Sabin and Emma Sapphire will perform and funk band Tell Yo Mama.

See the event schedule below:

To find out more about the event visit the Michigan Pride Facebook page.