21 Years Advocating and Out

Rachel Crandall-Crocker has two birthdays: the day she was born and the day she began living her truth. Friday, Nov. 2, commemorates her second. That was the day she committed to living fully as Rachel. Dozens of friends and community members attended a costume party in her honor at Affirmations, which doubled as the 21st-anniversary party for Crandall-Crocker’s organization, Transgender Michigan. 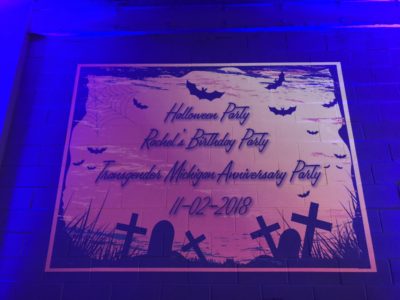 Founded in 1997 with the help of her wife Susan Crocker, the organization works to advocate on behalf of the transgender community through events, online resources and a first-of-its-kind helpline that’s reachable at 855-345-TGMI (8464).
Looking over her two-decadeslong advocacy, Crandall-Crocker said that nothing like Transgender Michigan existed when the organization was formed.
“There was a lot of loneliness. And there were people who were taking their own lives. It was really awful,” she said. “We wanted to create a way that people could all come together so we won’t have to be so lonely anymore.”
Its 17 regional chapters alone can attest to the organization’s fight against loneliness in Michigan’s transgender community, along with seven special interest chapters. Susan Crocker cited Transgender Michigan’s events calendar as another measure of the organization’s growth.
“For our first project we put out a calendar of all the events across the state for three months – it was half a page,” she said. “Now it’s too big to publish.”
Beyond that advocacy, Crandall-Crocker is also the founder of the International Transgender Day of Visibility.
“In March it’s the 10th anniversary,” Crandall-Crocker said. “I created it one late night on Facebook, and now it’s an international trans holiday!”
Crandall-Crocker is encouraging transgender allies to support the community at the polls this Tuesday. When asked her thoughts on the Trump administration’s recent transgender proposal, Crandall-Crocker said it “really isn’t a surprise.”
“We knew that Trump was going to do this,” she said. “However, we have to come together as a community. And we need to show him that all together we have power. And the only way we’ll have power is if everyone votes.”