Why Equality-Minded Vendors are a Necessity

Securing a cake, arranging a florist, booking a venue and tailoring day-of wedding outfits are all vital, if stressful, steps in the process to a wedding celebration. Now, layer an LGBTQ identity on top of that fact and the process becomes even trickier. Because even though marriage equality was secured by the U.S. Supreme Court in 2015 and thousands of LGBTQ couples have gotten married since, it’d be wrong to think that the fight for equality for the LGBTQ community is over. In fact, LGBTQ people across all walks of life are still fighting for protections regarding sexual orientation and gender identity across the nation; just this week the Supreme Court heard arguments for several landmark cases that will attempt to secure those rights.
With those protections in the air, that’s why more than ever couples need to ensure that their celebrations of love won’t be put at risk because of the bigoted views of a vendor. To help combat that, Between The Lines’ 2019 Wedding, Home and Life Expo will feature more than 80 equality-minded vendors who are dedicated, whatever one’s sexuality or gender identity, to providing top-notch service.
This year, to draw attention to the necessity of securing those rights and the value of LGBTQ and allied service providers, BTL has complied three varying perspectives on the process of LGBTQ marriage in 2019. 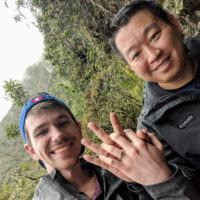 The Husband-to-Be
Like many wedding stories, Jack Collins’ has a romantic beginning: his fiancé, Gerardo, proposed on Machu Picchu on New Year’s Eve, during their trip to Peru. Now, having booked a venue and an officiant, plans are well underway for the June 2020 ceremony. Securing a DJ and a photographer remains on their to-do list.
Cognizant of situations where same-sex couples were denied service, such as in the Masterpiece Cakeshop case that made it to the U.S. Supreme Court, Collins said they’ve intentionally sought out LGBTQ-friendly service providers for their wedding.
“That was like the first step for me,” Collins said. “Ok, we’re doing this. Let’s find LGBT-friendly vendors. That was the first qualification. I was not going to start calling around, saying, ‘Hey do you do LGBT weddings?’”
Collins said he doesn’t understand how LGBTQ rights infringe on the rights of others.
“I just think it fits in the same category as other marginalized folks are faced with,” Collins said. “Maybe you don’t get that nice venue because your family’s from a certain country or your skin’s a certain color.”
The couple are planning to adopt children, and Collins is well aware of the currently shifting ground in Michigan when it comes to adoption agencies that contract with the state being permitted to discriminate against LGBTQ couples — or any couples, for that matter — on religious grounds.
“In my mind, it goes farther than finding the right adoption agency,” Collins said. “I have friends who grew up having parents in a same-sex marriage. In middle school I had a friend whose dad married a man and she was bullied for that.”
For that reason, they’re carefully considering where to live. Collins said they’d like to live in a more progressive area. And while he grew up in Novi, where he said he was impressed with the great foreign education program he received and that has the advantage of being ethnically diverse, the city also leans conservative.
In the end, Collins believes the ability to legally marry and enjoy all the benefits that go along with that is “so, so huge,” yet “the Equality Act isn’t even passed yet. We need legal, federal protection,” he said.
But for the most part, he considers himself lucky. In particular, he noted his supportive employer who “cracked a bottle of champagne when I got engaged.” 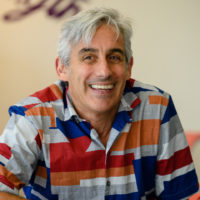 The Legal Expert
“The government has an interest in redressing and preventing discrimination in public accommodation. And when you do hold your business out to the public … you can’t pick and choose who you’re going to serve,” including LGBTQ people, said Jay Kaplan, staff attorney for the ACLU of Michigan, explaining the Masterpiece Cakeshop ruling.
In this case, the baker had claimed designing a wedding cake for a same-sex couple violated his religious beliefs.
“Obviously, freedom of religion is a very important right, and gets the strictest constitutional scrutiny from a court. And yet they found in the balancing test that the government has a compelling interest, in the least restrictive way, to remedy discrimination by enforcing these civil rights laws,” Kaplan said.
However, Justice Kennedy, who authored that 5-4 decision, is no longer on the court; Justices Gorsuch and Kavanagh are. Similar legal challenges have been made, and Kaplan warns that more may be on the way. In addition, an unprecedented number of judges hostile to LGBTQ rights have been appointed to the federal bench.
Kaplan and others have likened the manner in which religious exemptions are being used to carve out civil rights to a “sword” used to harm people. Faith-based adoption agencies that contract with the state that discriminate against, or carve out the rights of, LGBTQ couples are another such example. Using religion, one could claim exemption from any law, and, “We would pretty much gut whatever regulations that we have,” Kaplan said.
He compared this to some restaurant owners in the south following the passage of the Civil Rights Act of 1964 who, citing religious belief, refused to serve African-Americans.
While Kaplan said that he doesn’t see a threat to the marriage equality ruling per se, there have been attempts to water it down. For example, it’s been claimed that the marriage ruling sanctions marriage only, but not its benefits — Which is false, Kaplan points out.
Kaplan believes religious exemptions are the greatest threat to the LGBTQ community today; marriage is just one area of LGBTQ life affected. In recent years, some who oppose LGBTQ rights began employing this new tactic, after other attempts to demonize LGBTQ people had become less effective.
“And they have a willing partner in this current administration, from the top on down, proposing these types of exemptions,” Kaplan said. “We’ve never allowed religious beliefs to justify discrimination on the basis of race, on the basis of other religions. This idea that we can carve out exemptions when it comes to LGBT people — that’s so constitutionally flawed, so wrong. But this isn’t going away anytime soon.”

The Religious Leader
As pastor to an LGBTQ-affirming church, the Rev. Dr. Roland Stringfellow has a predicament when it comes to performing wedding ceremonies for his LGBTQ congregants: they cannot occur in the sanctuary in which the church members worship. That’s because the Metropolitan Community Church of Detroit currently shares space with a congregation in the United Methodist faith, and that church’s governing body recently ruled against affirming same sex marriages. As a “reconciling” church, they can celebrate LGBTQ couples but not permit marriage within the church itself.
“Our choice to be in this United Methodist Church has solely been economical,” Stringfellow explained. “That has not stopped me from marrying couples within our church,” said the pastor, who has married dozens LGBTQ couples since 2005 when it was first legal in California. These days, they find another space, such as a park or a congregation that is affirming and welcoming.
When it comes to being denied wedding-related services, Stringfellow said he was only aware of that happening locally in terms of clergy refusing to perform weddings of LGBTQ people.
“I had a couple come to me because their pastor would not marry them,” he said. “So they’re not members of my community, but they said, ‘OK, well, then fine, we’ll take our business elsewhere.’ And so they left that congregation because it was not affirming who they were.”
Even before marriage equality, “We have been a resourceful community,” Stringfellow said. “And we’re going to have our ceremonies whether the state recognizes it or not.”
Yet now that the unions are recognized, he believes the fight for true marriage equality isn’t over.
“While you can find a florist, you can find someone to do your cake, you can find a clergyperson … there are legal benefits at stake here. And thus, this challenge continues on. We have to continue to make sure the laws of our land reflect our community, and the members who live within them. Because otherwise, we’re going to continue to have a two-tiered society, where some are welcomed and others still live in the shadows.
“It is imperative for all of us, whether you are a same-sex couple who wants to get married, or is married — it doesn’t matter who you are,” he continued. “This talks about the quality of our community — that we’re going to have people hiding in the shadows, and that should never be.”