7 Photos of Detroit Queer Couples of Color in Love

Jamal Jordan traveled all over the world while making “Queer Love In Color,” a book of photos and essays. But one place was particularly notable: Detroit.
“All the couples in Detroit were very cool for me because Detroit has a very special place in my heart,” Jordan, 31, tells Between The Lines. Detroit is well represented in Jordan’s book, which features seven different LGBTQ+ couples of color in Michigan. The New York-based photographer’s parents live in Detroit currently; he lived in Southfield between the ages of 13 and 18. He also attended The University of Detroit Jesuit High School. 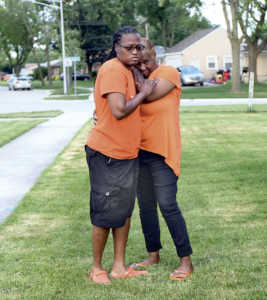 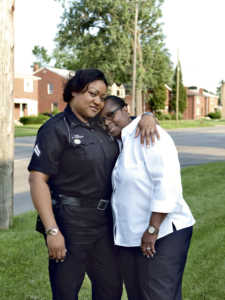 As a teen, he attended the youth drop-in program at Affirmations LGBTQ+ community center. “That shit made my entire life,” he says, noting that the first time he went he wore a shirt and tie and brought his mom along. “It was really just the first time that I could hang around queer people and be like, ‘Hey, do you want to play pool?’ Suddenly you’re not isolated anymore.”
Jordan says that his family was very supportive when he came out. Together, he and his mother would watch “Noah’s Arc,” the Logo drama about Black gay men living in Hollywood.
While back in Detroit to shoot photos for the “Queer Love in Color” project, he had a goal of meeting “at least one older couple.” Indeed, one of the couples in the book to generate a lot of attention online is Mike Petross and Phil Pugh, together since 1967. “People are really not used to seeing older couples,” Jordan says. “It drives the internet crazy.”
“We’ve spent every night together for over 40 years,” Pugh says in “Queer Love in Color.”
Jordan also photographed LGBT Detroit Executive Director Curtis Lipscomb and his husband Willie Jew. He chose to shoot the photo in part of the LGBT Detroit building that is currently under construction because he thought it would be “cool to have that image” to look back on once the renovations are complete.
Also featured in the book are April and Michelle Anderson, owners of Good Cakes and Bakes in Detroit. They have been together since 2009 and were married in 2012.
“I didn’t expect this bakery down the street from my high school to be lesbian-owned,” Jordan says referring to how much things have changed since he was a teenager.
Anderson enjoyed being interviewed for the book but was not as enthusiastic about being photographed. “I hate taking pictures,” she says. “I just critique myself too much.” 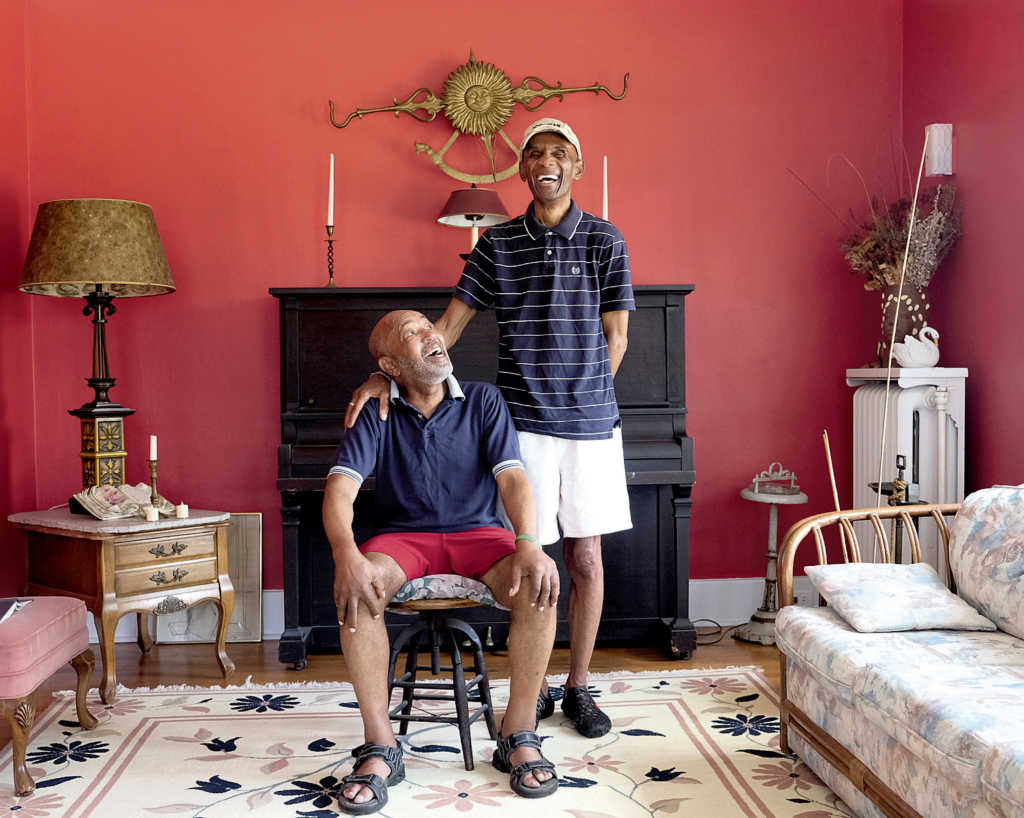 Anderson says her experience coming out was difficult, as her father is “very southern and old and conservative.” But after she and Michelle were legally married “something clicked” in him. He came around, even though he “still has a little hesitation,” she says.
When Anderson showed her father Jordan’s book, opened to the page featuring April and Michelle, he said, “This is sweet.”
“I really think [the book is] a great visual expression of Black love,” Anderson adds.
Other Detroit couples include Keisha Watkins-Dukhie and Sandra Dukhie who are pictured in an embrace on page 201 in the book’s epilogue, entitled “Conclusion: The Work Begins,” next to the words, “Radical self-love changes everything.”
In the photo of Danielle Woods and Patricia Little, who met while working at the Detroit Police Department, Woods is in her patrol uniform. Woods serves as the department’s LGBTQ liason. Theirs is a story about opening yourself up to love and to be loved. “You have to make the choice to trust the person you’re with,” Woods told Jordan.
Cynthia and Tracie Howard are wearing matching outfits of black pants and orange shirts in their photo taken at their home. The couple shares a strong faith in God. Cynthia says in the book, “You need to see you can be Black, you can be gay, you can be Christian, you can be married, and you can be happy.” 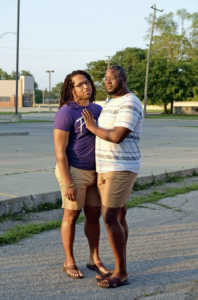 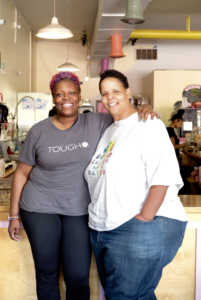 Also featured are Amar Rushing and Thomas Williams, who met on Grindr in 2014. Their relationship progressed from texting to FaceTime to finally meeting in person. They quickly fell in love. Thomas describes it in the book as being like “falling off a mountain.” Their playful photo features the two of them, with Thomas in a purple Prince t-shirt, springing into the air.
“Queer Love In Color” began as a way to fill a void. When Jordan was growing up, images of queer people of color were scarce. In fact, they’re still scarce. But Jordan’s work is helping to change that.
“It really shocked me how difficult it was for me to find evidence that queer couples exist through media,” Jordan says, adding that not seeing representation is psychologically harmful, especially for queer identified youth who “have a hard time projecting themselves into adulthood because there’s so little representations of them as older people.”
When queer people of color are media subjects, he says, the scope is frequently limited and negative. “When I look at the larger media landscape for queer people of color [today], it’s mostly about trauma or lust,” he says. News stories about doubly marginalized communities are too often about “murder or death or how a community is being taken advantage of by a powerful entity.”
“I wanted to emotionally engage on the level of whimsy, joy and love,” he says of “Queer Love In Color.”
The project began in 2018 when The New York Times, where Jordan was working as a digital editor, published his photo essay that explored the question: “Why do no gay people look like me?” He photographed and interviewed a half a dozen couples. The piece went “super, super viral,” Jordan recalls.
“It kind of caught me by surprise,” Jordan says about the concept for “Queer Love In Color.” He was about three months into his job at The Times when he found himself in a meeting with other staffers about a special Pride section the paper was putting together. “They asked for stories,” he says, “and sent us on our way.” He came back with the idea to photograph queer couples of color.
He calls his book “an extended photo essay.”
“I really love photo and text journalism,” he explains. He says the book is “like a lovingly extended piece of what you’d read in the Sunday Times.”
“I never wrote the article and thought, ‘This is going to become a book,’” he says. But the response to the story was so positive and other people began reaching out with their stories. “About a half a year later I decided to make this book and I took [a] sabbatical from work to travel around to do that.” 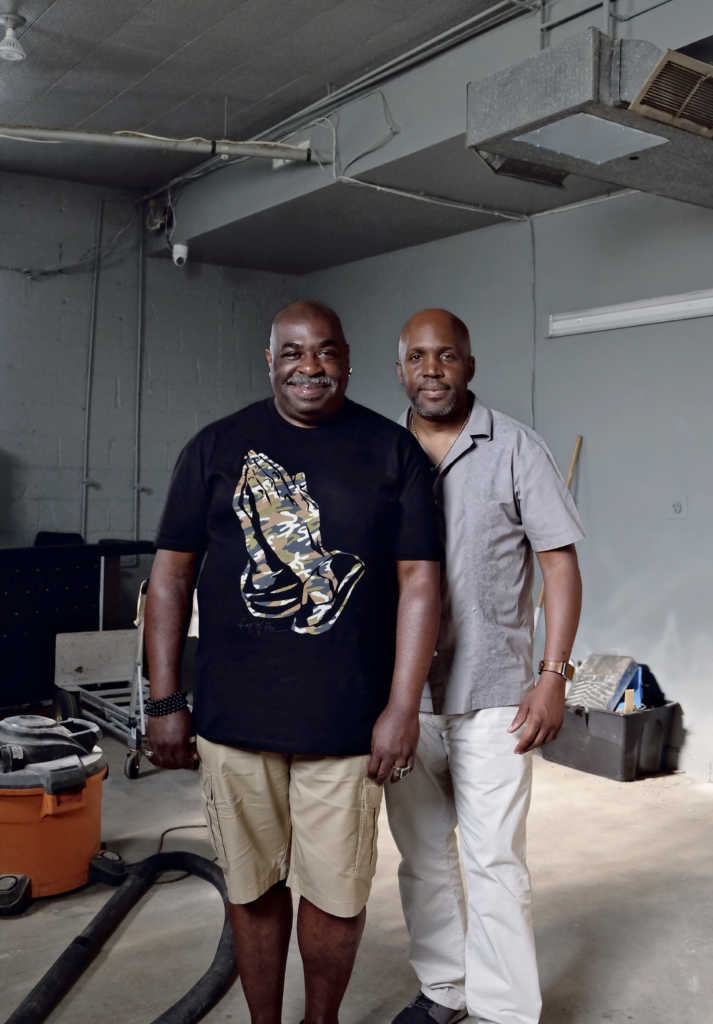 Jordan traveled across the country and internationally to find queer people of color in love. Within the U.S., he went to Chicago, San Francisco, Atlanta, Orlando and Detroit. International locations include Toronto, Canada and Cape Town, South Africa.
“It was a year and a half of just talking to people. I would often see couples in the street and chase them down,” he says, which he did in both Miami and New Orleans. “Every city I went to I’d speak to whatever the local queer friendly church or religious organizations were. There’s a lot of organizer and community leader energy in the book. It was quite the reporting adventure.”
Jordan followed his instincts and says he was guided by this question: “What energy needs to be in this book?” That energy organically came to life while meeting the couples, and when he photographed them hugging, holding hands, smiling with their children, this was how he did it: “I don’t say ‘I’m taking your picture’ — I say, ‘I’m making a picture with you.’”