Abigail’s Pride, and Other New Prides in Michigan: Checking in with Five First-Time Organizers

Five new Prides worth adding to your calendar

This summer in Michigan, Prides of all kinds are springing up across the state. From Madison Heights to New Buffalo, Pride Source checked in with the organizers of some of the new (or nearly new) Pride festivals happening now and throughout the season.

Last year’s first-ever Pride festival in Coldwater, Michigan drew around 400 people and was declared a success by organizer Chris Boger. This year, she and her crew are raising the bar.

“We put in for a proclamation for this year,” Boger said. “Hopefully, the second week of September every year, [the city] will proclaim that week Pride Week.”

Three years ago, when Branch County Gay Pride, an LGBTQ+ nonprofit, was launched in Coldwater, a Pride festival seemed to naturally follow. Now, Branch Pride is also a community center where Boger serves as executive director.

This year, festivalgoers will find a midway area lined with nonprofits and service organization booths, each with games and prizes to keep folks engaged. “We figured if they were just a regular booth, not everybody would stop at it,” Boger said. “So we thought we’d be creative and come up with games for all of them and prizes.”

A pet parade is new this year, along with more activities for kids, speakers, dancing, food trucks and drag performances.

“In our community, our Pride is very family-oriented,” Boger said. She believes that’s key to its success. “A lot of Pride festivals have things about them that are not exactly family-friendly. We’ve tried to provide ours with a family-friendly environment, even the drag show. The entertainers must do PG-13 type of entertainment and music.”

Boger, who is trans, was born and raised in Coldwater and is proud of being the first LGBTQ+ grand marshal for her city’s holiday parade. She’s currently a candidate for Branch County Commissioner.

“Since we founded Branch County Gay Pride, there’s been a lot of improvement in people feeling more comfortable to be able to express themselves,” Boger said. “Having an organization they feel like is behind them has truly helped in that, making our community more equitable and equality-based.”

Let it be known the Girl Scout organization is queer-friendly.

When Brandon High School sophomore Abigail Rowe was searching for an idea for her Girl Scout Gold Award, the highest achievement in Girl Scouting, she happened to be watching a YouTube video of a Pride festival while in the car with her mom. 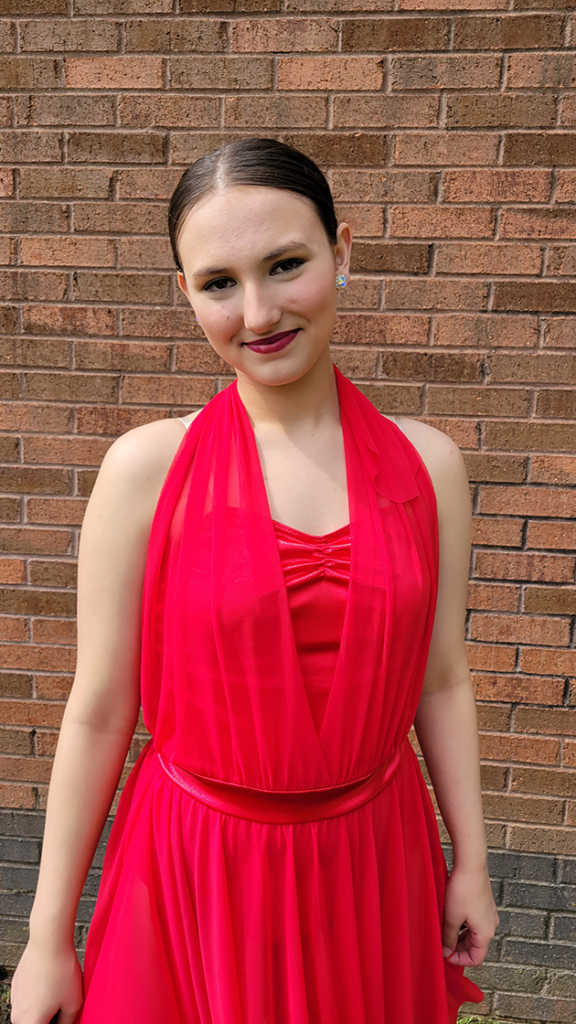 “I said to my mom, ‘I wish someone would throw a Pride festival here that I can go to,’” said Rowe, who is bisexual. “And she said, ‘Well, why don’t you do it?’ And then I got home that night at 11 o’clock and made a binder with a rainbow on the front and started planning it.”

The planning took six months. Rowe met with her advisor, who is now co-director of Rowe’s event. Among other things, they would need to plan the parade route and where the roads needed to be closed before obtaining permits from the township office. They’ve been working since October to arrange activities, entertainment and speakers.

“There’s gonna be a kid carnival area with carnival games for kids as well as relay races,” Rowe said. “And then for the adults, there’s gonna be things like corn hole and giant Jenga, and then we also have a tie-dye booth.” There will also be a parade at 11 a.m. and an area where people can speak informally with mental health counselors.

For the most part, Rowe said the community where she lives is supportive of the LGBTQ+ community.

“Just in putting myself out there, doing this Pride festival, I’ve met a lot of people who are very supportive,” Rowe said. “But there’s some issues that I’ve had at school, and it’s mostly kids my age that gave me a problem. There’s also been some hate on social media, but it’s always combated with a bunch of people who are super supportive.”

Abigail’s Pride is a 501c3 nonprofit organization dedicated to highlighting diversity and inclusion while bringing awareness to the perspectives of LGBTQ+ youth.

Madison Heights Arts & Pride: A Former Teacher With a Passion for Pride

It all started when Madison Heights resident Jennifer Nagle put out her Pride flag when she was new to the city.

“I had just finished moving in the last of the boxes and was in the process of mounting my American flag and my Pride flag,” said Nagle, a former teacher, “when one of the neighborhood kids who was riding his bike screeched to a halt and said, ‘Hi! I like your flag!’ And I said, ‘Hi! Me too!’”

As Nagle got to know the kids in her neighborhood, she learned the one who had greeted her was LGBTQ+ and had been bullied at school. She said she has a special place in her heart for the “artsy” or “weird” kids and recognized their need for extra love and support. Nagle had an idea.

“I wrote a couple of my city council members, and said, ‘Hey, are there plans for a community Pride in the works? If not, I’m willing to help organize,’” Nagle said. “And lo and behold, I find myself on one of the community boards to help and organize Pride.”

The first Arts and Pride was held last year. Nagle described it as a small, community-driven event that came together without city involvement. Still, it attracted over 100 people — and generated a lot of enthusiasm. This year, the Madison Heights Arts Board and the Human Relations and Equity Commission teamed up to put some “organizational muscle” behind it, Nagle said.

Nagle calls herself the “chief cat herder” of the operation. She and her partners in Pride have booked a face painter, food trucks, a DJ and musicians. Mostly, she wants kids in the community as well as their parents, along with adult community members, to know they’re not alone.

“I think it’s important that we let our whole community know that people and families come in all shapes and sizes,” Nagle said. “And the kids who’ve been suffering a lot of discrimination and hate, that we give them a really loud sign that we love them and that hate is not tolerated in Madison Heights.”

Harbor Country Pride: A Positive Outcome From the Pandemic

In New Buffalo, a new Pride festival emerged from the darker days of Covid. And two queer friends are responsible. “With the pandemic and both of us in the restaurant industry, we had a little bit more time on our hands last year,” organizer Abby Voss said. “So we decided to just go for it.”

Harbor Country Pride returns to New Buffalo this year, and co-organizer Voss promises quality over quantity by focusing on 10 main events along with a more youth-centric atmosphere. 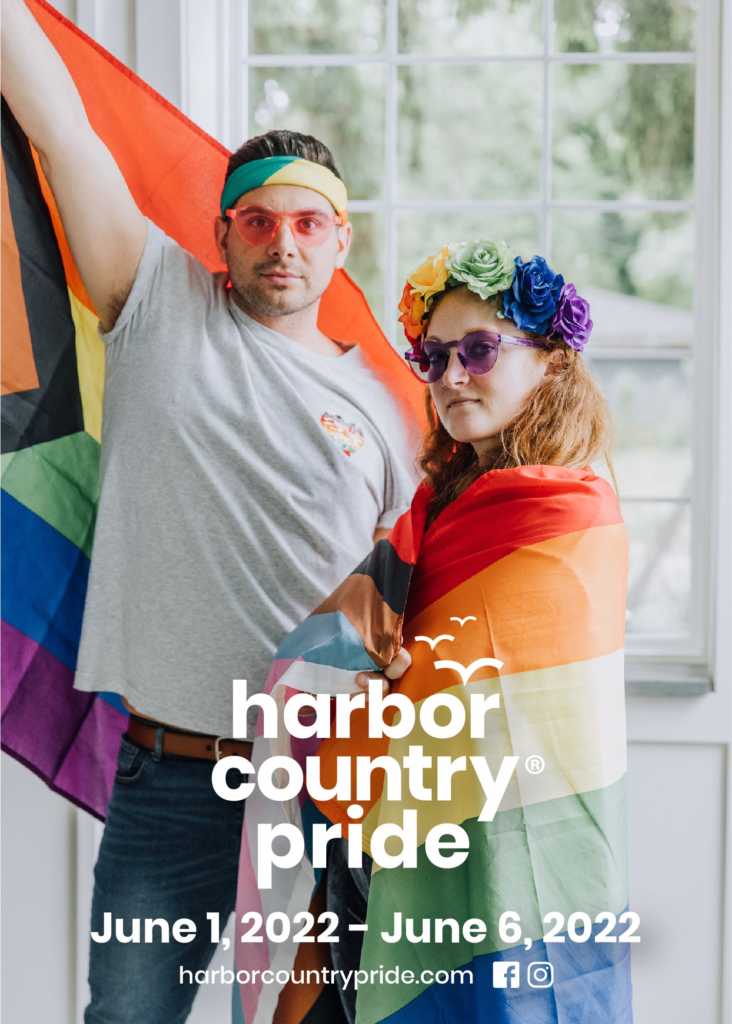 “That kind of feels like the need right now, to focus on creating a safe and inclusive space in our community for the youth, especially when there’s sort of an attack on what they’re allowed to be taught or talked [to] about,” Voss said.

Festivalgoers can expect a showing of “Hedwig and the Angry Inch,” plus performances by the queer punk band Bev Rage & the Drinks and Lady Stardust, a David Bowie cover band. The OutCenter of Southwest Michigan, which helped along the way, is partnering with Harbor Country Pride on their “grom” or graduation/prom party for youth in grades six through 12. The theme is “Dungeons and Drag Queens.”

Voss grew up in southern Illinois. As a queer-identifying woman, “I didn’t have a space where I could be out and proud, or even an avenue to understand what that would look like,” she said. Her counterpart in planning the event grew up in Harbor Country and wasn’t out in high school.

Voss said she felt honored to do this work. “We’ve had a huge turnout of donors this year that allowed us to throw all of these wonderful events, and we have wonderful predecessors who sort of paved the way in our community to allow us to do this very openly and honestly. And we’re just very grateful for all of the support we received.”

In a First for Berkley, a Block Party that Coalesces Around Pride

Everyone loves a block party, and in Berkley, it shows — the city has been holding popular, well-attended block party events for many years. Mike McGuiness, executive director of the Downtown Development Authority (DDA), said this year’s new event is being held in response to resident requests to add a Pride-themed block party to the calendar.

“It’s a really big part of the caring and communal vibe that Berkley residents love and have enjoyed for decades,” said McGuiness. “It’s a resident-driven and LGBTQ community member-led initiative where we’re bringing the community together, but in the downtown and coalescing around Pride.”

McGuinness said partygoers can expect community resource booths representing organizations like the Berkley Gay-Straight Alliance and the Ruth Ellis Center. Interactive games, entertainment, music and an art project will also be part of the fun. In addition, many of the downtown Berkley businesses that otherwise would not be open on a Sunday are expanding their hours and hosting Pride-focused activities and promotions to coincide with the event.

In the past few years, Berkley has grown increasingly inclusive of its LGBTQ+ residents. The city council has enacted a conversion therapy ban, issued a resolution in support of adopting an updated nondiscrimination policy and they’ve begun introducing a Pride Month declaration each year.

“Southeast Oakland County is obviously a very welcoming, progressive place,” McGuiness said, “and we are excited for downtown Berkley to be emerging as not only a destination during Pride Month, but also all year long, so that way residents and business owners and consumers know that it’s a safe, welcoming and enjoyable place.”

McGuinness, a resident of Pontiac, is perhaps better known as that community’s city council president, one of three out councilmembers there. “As an out, gay man who’s been working in [Berkley] for about a year, leading the Downton Development Authority, the downtown has been very welcoming, very, very proactive and eager to demonstrate that it is a welcoming, hospitable environment,” McGuinness said.

McGuinness noted the presence of out LGBTQ+ business owners and establishments that have become destinations for the queer community in Berkley.

“This is a way of coming out for that community that’s been here all along, but hasn’t been as high profile or as formalized with events or commemorations.”