All in a Day’s Work
Two years ago, after the Michigan State Board of Education approved a set of policy recommendations for the support and inclusion of LGBTQ students, the father of a child attending Dexter’s Cornerstone Elementary School scheduled a meeting with principal Craig McCalla. He took issue with the school’s bathroom policy: allowing students to use the bathroom that aligns with their gender identity.
“I know what you’re gonna tell me; you’re one of those liberals,” said the father, according to McCalla, who could predict what was coming next.
“You’re lettin’ people in who wanna use ‘em,” said the father.
After McCalla replied yes, the father said, “Well I don’t think that’s right. I think you gotta know.”
McCalla calmly pointed out the absurdity of the angry parent’s argument.
“So what you’re asking me is, ‘Do you want the job of making sure everybody pulls down their pants before they walk in and show you their parts?'” asked McCalla.
“Well, you can’t do that!” the angry father said.
“But that’s what you just told me you want. You want me to guarantee that everybody’s parts go in their right bathroom,” McCalla told him. “See how ridiculous it sounds?”
Since McCalla wouldn’t budge, eventually the exchange ended.
“He kept looking at me, and I’m like, ‘Dude, you’re not gonna get anywhere with me,’” McCalla said.
An unwavering advocate and steadfast ally to his Kindergarten through fifth grade students, McCalla said he takes such conversations in stride. And it’s just this determination and dedication that earned him both local and national recognition. Along with a regional award in 2012, in 2017 McCalla was honored as Michigan’s Outstanding Practicing Principal for his advocacy on behalf of his LGBTQ students, as well as social justice awareness and leadership in transgender issues. And this October, he was named a 2018 National Distinguished Principal by the National Association of Elementary School Principals.
Now 13 years into his career, McCalla said he always knew that education was his calling. He said that having a brother with cognitive impairments guided his decision to focus his early career on kids with special needs.
“I knew though that cognitive impairments were a little bit too close to home,” said McCalla. “So when I was taking my classes, I found a niche for working with students with emotional impairments. I really enjoyed it and I really connected with those students and families.”
Following a year in Saline, then six in Chelsea as a self-contained early intervention teacher working with K-5 students, McCalla spent two years as a teacher consultant at a middle school in Chelsea. Then he decided to throw his hat into the administrative ring. And after a year as a middle school and high school assistant principal, he secured his spot at Cornerstone Elementary. McCalla’s passion for his work with young children is unmistakable.
“I love my little ones. I tell everyone, they make me smile every day,” said McCalla. “I love to come to work. I have a tremendous staff … We all work as a team, my special ed team, amazing people. And just the kids. Every day they fill me up with joy. To see them ready to learn, excited to try new things. They don’t fear taking risks, and I just enjoy seeing that every day. I tell everybody I love being the rock star to the 4- to 8-year-old crowd.”

Following Through
When McCalla was first presented with the needs of a transgender Kindergartener six years ago, he called it “an easy conversation to have.”
“When Pete and Sara (Tchoryk) came to me … and said hey, [Jacq] is coming to school, and we started talking about what it means to be transgender, and what I’m gonna do here at Cornerstone to help him out,” McCalla said. “I feel as an elementary principal it’s my job — or any principal — to support all your students and give them what they need.”
Peter Tchoryk agreed that McCalla was immediately receptive.
“One of the first things he said [was], well, ‘I will learn about this. And I don’t have much experience with transgender children, but I guarantee you that we will create a safe and supportive environment for your son. Because we do this for every child,’” he said. “Sure enough, he followed through.”
Jacq adjusted well to school until an issue arose in second grade: He was troubled that his classmates did not believe he was transgender. After the family approached McCalla, they decided to speak to the students. And for all the trepidation he and the Tchoryks experienced beforehand, their fears were largely unfounded.
“We talked to the class and Jacq wanted to talk to the class about who he was and what it means to be transgender. It was funny, when we got done with that presentation that day I was like, ‘Are there any more questions?’ Hands [go] straight up: ‘We’re good with Jacq, we understand that. But somebody’s stealing bubble gum. Can we talk about the bubble gum?’” McCalla said with a laugh. 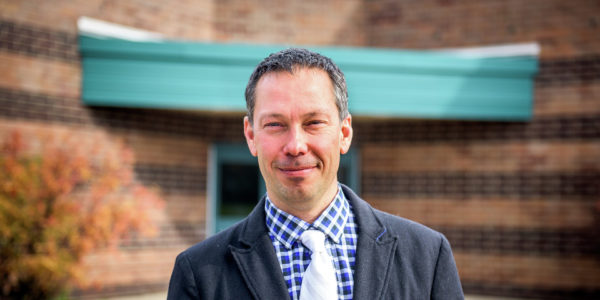 Long-Term Advocacy
While it had been his mission from the outset to support all students and create safe environments for them, McCalla has been cast in the spotlight as a champion for LGBTQ students since he and the Tchoryks crossed paths. And that’s a role he has wholeheartedly embraced.
“So the amazing thing, you have one elementary school principal that realizes how important this is, and it really is life and death for these kids, there’s just no doubt about it,” Peter Tchoryk said. “[It’s] amazing what just one educator could do then to create this ripple effect.”
Cornerstone has completed all-staff training around supporting LGBTQ kids, and McCalla hopes to include social justice training for the entire staff, too. The school also incorporates elements from the HRC Foundation’s Welcoming Schools program that provides training and resources to elementary school educators.
But McCalla’s efforts have reached beyond the elementary school, and beyond Dexter. Along with the Tchoryks, he is a founding member of the Transgender Task Force, which provides guidance to schools in Washtenaw and Livingston counties on things like name changes and student records, as well as professional development and resources to share with social workers and families. Nationally, McCalla has been asked to join a number of amicus briefings on behalf of trans youth, most notably, G.G. v. Gloucester County School Board, the case involving Gavin Grimm, who was barred from using the boys’ restroom at school because he is transgender.
McCalla said his advocacy is rooted in doing what’s right for kids — not just for the kids in Dexter, but those in the entire state and beyond. That’s because in places where LGBTQ kids’ needs are addressed, they are able to thrive.
“How do we support our LBGTQ students in schools? What policies and procedures need to be in place?” McCalla said. “There’s lots of reports and studies out there that if students feel safe and supported, suicide rates go down for our LBGTQ kids, and academic scores go up; there’s less bullying and harassment, that’s really what those [Michigan State Board of Education] guidelines are part of.”

All Means All
Based on McCalla’s and his school’s reputation, a number of administrators, families and groups have reached out to him over the years.
“I guess that was one of the most shocking things to me,” he said, when asked about being a role model. “Why is everybody coming to me? Aren’t all administrators doing this? Isn’t everybody taking care of their kids? And they’re like, no. It doesn’t make a whole lot of sense to me. ‘Cause I’m nothing special. I’m the guy who puts in place for his kids what needs to be put in place.
“I’ve always erred on what’s best for kids. And it’s funny, I never realized how much I said it until people started telling me, you know you realize you always say ‘all means all,’” he said.
That three-word credo, “all means all,” was adopted as the school’s motto. It informs everything McCalla does as principal of Cornerstone Elementary, and Peter and Sara Tchoryk recognized that early on. Peter Tchoryk said they were fearful, but couldn’t be more grateful for that first conversation in 2012 — and where it led.
“We look at Craig as truly one of our heroes,” he said. “We’re fortunate we have a Craig. And unfortunately, there’s a lot of kids who don’t have a principal like him and a school district like we do. Our hope is that other principals and other school districts will see this and say, ‘You know what? We can do this, too.’”