Bilingual singer-songwriter to perform in Ann Arbor on Jan. 28

She’s also very much in love.

All you have to do is watch the video for her song “Heaven Knows,” which includes footage from her wedding to her wife Jodi Ganado. The love between the two is clear.

But “Heaven Knows” isn’t your everyday love song. “That was the song that for me really talks about the struggle of being queer and Catholic,” Chavez, who is performing as part of the 45th Ann Arbor Folk Festival on Friday, Jan. 28, tells Pride Source.

Chavez and Ganado, who have been together for 16 years, met at the University of Texas at Austin’s Catholic Center.

Chavez describes her college self as “super Catholic.” “We’re both still practicing Catholics,” she says. “Our entire relationship has been because of and in the church.”

Of course, the Catholic Church isn’t known for being champions of LGBTQ+ people and causes.  The Church’s stance caused the couple considerable pain at the beginning of their relationship. “When we first kissed, I remember feeling like the world was going to end. As Catholics we were going to get struck by lighting,” Chavez recalls. “And then for it to be the most beautiful thing I’ve ever experienced.”

Instead of being struck down, they were lifted up by their love, though it took considerable time.

“We’ve been lied to,” Chavez remembers thinking. “In the moment I was like, ‘WTF God?’ Like, this is the most God I’ve ever felt.” She remembers it being an experience “in life that you feel like there’s something bigger.”

And yet, Chavez recalls “trying to pray my own gay away and stop it.”

That approach did not work.

“I think it probably took about six years into our relationship to say, ‘Oh, this is really beautiful; maybe we should stop waiting for God to end it and realize that God has blessed us.” It was out of this realization that the seed for “Heaven Knows” was planted.

The song addresses “growing up in a world that said you couldn’t be both [queer and Catholic] and then reconciling the fact that, yeah, you can. Just because the world isn’t creative enough to have enough space for that doesn’t mean that God is not,” Chavez says. “What does it mean to love my faith and love Christ and social justice and to love my wife? Those are very much parts of the same thing and they’re not contrary or opposite or in opposition.”

Chavez describes Ganado as her hero. “My wife is incredible,” she says. “Not only does she have a smile that continues to inspire me to write music and wake up in the morning and be excited about life, but she’s truly the kind of person who has shown me what it is to love and to love on all levels.”

Chavez jokes that the wedding footage was a way to trick Ganado into being in a video. Chavez describes Ganado, a public school teacher and high school varsity basketball coach, as more of a behind-the-scenes person when it comes to Chavez’s performing life. Ganado is Chavez’s manager, however.

The couple also run a non profit called Niñas Arriba, a college fund for young women in El Salvador. They started the fund after living in Soyapango during a mission trip where they taught English at an all-girls private Catholic school.

“It was such an amazing experience,” Chavez says, and it felt wrong to just “walk away” after eight months. They’d met so many young women who wanted to go to college but did not have the opportunity, both due to money “but also being in a society that doesn’t value education for young women.”

Niñas Arriba has four graduates and a current cohort of four women. Chavez credits her fans, who she says are the ones who primarily support the fund. 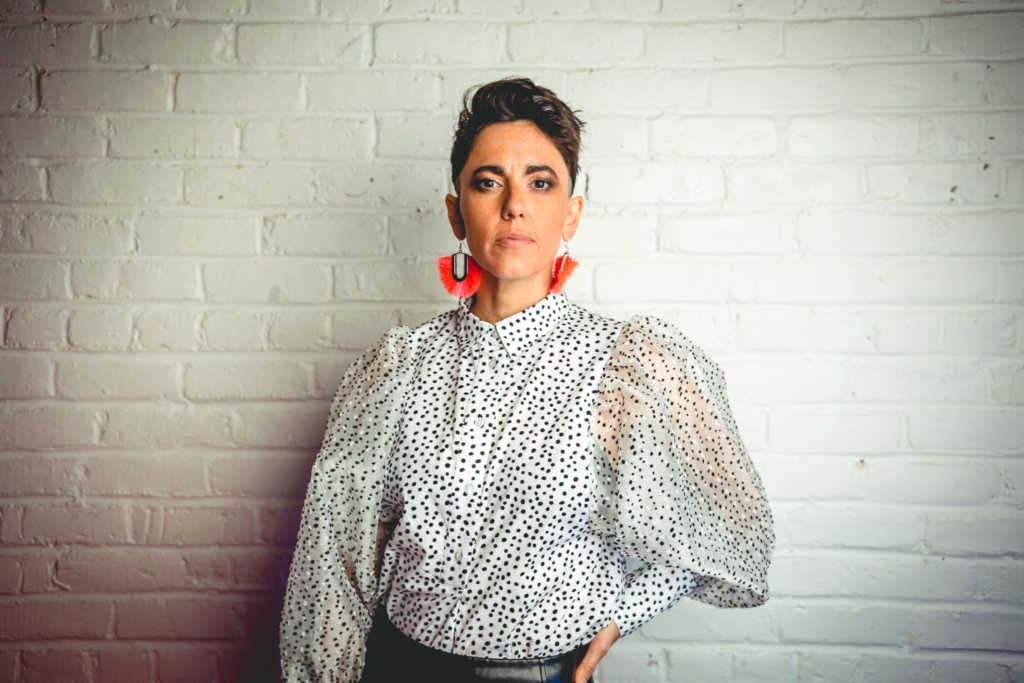 And, yes, Chavez has a song about this, too. The song, called “Siete-D,” dedicated to the young women she taught, won the grand prize in the Latin category for the 2014 John Lennon Songwriting Contest.

In the spirit of taking on social causes with her music, Chavez’s most recent release is a dance remix by Boy Sim of her song “She Persisted.” The video features “RuPaul’s Drag Race” royalty Rock M. Sakura, Cynthia Lee Fontaine and Kylie Sonique Love. It also marks the debut of GinaTonic Lee Fontaine.

“One of the reasons I wanted to do the video was to honor the drag community as a way of saying thanks,” Chavez says, acknowledging their contribution to advancing LGBTQ+ rights in some of the movement’s earliest days.

Chavez originally wrote the song about Republican Sen. Mitch McConnell’s silencing of Democratic Sen. Elizabeth Warren. Chavez went on to perform it on the steps of the State Capitol at the Austin’s Women’s March for a crowd of 50,000.

Her goal in writing the song was to create a new kind of protest song that could be sung at the capitol, at a church, at a club, and now on the dance floor. “I want this to be a glitter fabulous gay remix,” she says. She wants the people listening to it to think, “I am on the dance floor living my best life.”

It could certainly be argued that Chavez is living her best life. Acclaimed and award-winning musician. A successful non-profit. A loving marriage. And that upcoming performance in Ann Arbor. She says she’s looking forward to coming back to Michigan, even if the last time she played in Ann Arbor there was a winter storm that knocked out power to her Airbnb. A lifelong Texan, she was not accustomed to that kind of cold.

Thankfully, as she puts it in her song,  “La Que Manda,” she is “un fuego abrasador.”

She sings, “Solía compararme con otros. Solía temer las consecuencias. Solía no creer en mi misma. Ahora, soy un fuego abrasador.” (“I used to compare myself to others. I used to fear the consequences. I used to not believe in myself. Now, I am a scorching fire.”)

And Heaven, no doubt, knows.