Another Year Waiting: How the Pandemic Has Caused Trans People to Face Yet More Barriers to Treatment

As a professional drummer, Rikki Bates knows something about keeping time. And time, over the past year, has moved at an agonizing tempo.
“You’ve got to go straight up the trail and, you know, cut down trees with nail files. It just takes a long time,” she says. “Well, the clock’s ticking.”
Bates was 4 years old when she knew she wanted to play drums. Around that same time, she also realized she was different. Something felt wrong. “I felt paralyzed … I lost interest in absolutely everything and just felt like I wanted to die,” says Bates, who lives in Cape Code, Massachusetts.
At last, in March 2020, she had access to a surgery she had known she wanted since she first heard of it in the 1970s. At 66 years old, she was finally ready to set a date for a gender-affirming operation that would drastically improve the quality of her life.
Then, the coronavirus hit, and the whole world paused.
“To think that I was all ready to have this facial surgery and then [to] have the rug pulled out from under me was devastating,” says Bates. “It’s terrible.”
She had no choice but to keep doing what she had been doing for as long as she can remember — wait. During a stressful and traumatic pandemic year for everyone, she wasn’t the only trans person to do so. Many transgender individuals seeking gender-affirmation surgery faced the additional stress of postponed lifesaving treatments.
Gender-affirmation surgeries can be a pivotal stage in a person’s transition. Doctors today have surgical techniques at their disposal that make it safe and feasible to alter parts of the body to better align with a person’s true gender identity.
Commonly sought procedures include bottom surgery (below the belt), top surgery (waist up) and facial surgery, where parts of the skull that serve as gender cues are altered. Not all people who are transgender choose surgery, but some feel that one or a combination of these surgical interventions is necessary for them to live their most authentic lives.
In Bates’ case, she had already received three gender-affirming operations before the pandemic: two bottom, one top. For her, the surgeries made life worth living.
“Before I had any surgery, I just didn’t care about anything anymore. I just didn’t care about anything at all and just didn’t want to be alive,” Bates says.
After the surgery, everything changed. “I felt like this mountain of lead weights just went away,” she says, “and never came back.”
At every step of the way, she had to fight her insurance over the medical necessity of gender-affirmation surgeries for her, a process that dragged on “at a snail’s pace” through months and years. But she never considered giving up because “it’s the only path toward me being able to love myself, which isn’t easy if you’re transgender.”
Last March, at the beginning of the pandemic, operating rooms across the nation shuttered their hermetically-sealed doors to any surgeries that were elective or nonessential. That included gender-affirmation surgeries, along with anything else that didn’t require immediate and urgent medical attention.
Some operating rooms started performing nonessential surgeries during that summer, only to close once again when COVID-19 cases peaked this past winter. During a tumultuous year, trans people waiting for their surgery date were on an emotional roller coaster.
During this period, Amy Hunter, the executive director at OutFront Kalamazoo, an educational and advocacy group that provides support for LGBTQ+ youth who are experiencing homelessness, witnessed an uptick in demand for OutFront’s therapy groups. This pattern is emblematic of how rough the past year has been for the trans community.
“The whole idea that gender-affirming care is elective needs to be disabused,” says Hunter, a woman who is transgender. “In most cases, it’s actually life-saving.”
Hunter, 61, lives in Kalamazoo, and she said the area is “luckier than a lot of places across the state,” and certainly across the country, because there are a few doctors there that specialize in gender-affirming care.
“It’s really a hit or miss, whether you can find competent care or even a doctor that will see you,” she says. This struggle to attain compassionate health care from a competent provider can take a toll on trans patients as they seek care.
“The process is slow,” Hunter says. “We have to teach our doctors. We have to teach our social workers. We have to teach the intake people about who we are, and what our needs are and why. We try to teach those systems how to deal with us as who we really are, not as how they would perceive us [or] how they would like to perceive us.”
Even areas where gender-affirming care is more easily found are not without their problems, and many people in trans or gender-nonconforming communities feel left behind, especially given the particular set of challenges posed by the last year. 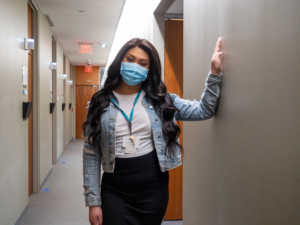 About the Author: Taylor Blackley