In what appears to be the act of a small, extremist group of parents whose children attend Clarkston Community Schools (CCS), an online form is being circulated that encourages community members to “report” suspect curriculum and teachers guilty of behaviors like addressing students by their preferred pronouns.

The Google Doc, titled “Woke Incident Report (CRT/DEI) CCS,” uses the shorthand “CRT/DEI” for Critical Race Theory and Diversity, Equity & Inclusion. This form aligns with a trend that conflates two concepts and distills them into a dog whistle aimed to bolster an extremist right-wing base. One frequent commenter in a Clarkston parent Facebook group spelled it out in a Sept. 4 post: “DEI is a dangerous euphemism for CRT.”

Pride Source spoke with “Beth,” a CCS parent who requested anonymity due to the sensitive nature of this topic in her community. She plans to comment at an upcoming school board meeting and explained that the dustup began with the public Facebook group, Clarkston Schools Parent Advocates, which is where she found the reporting form posted Monday, Sept. 6.

The introduction to the form reads: 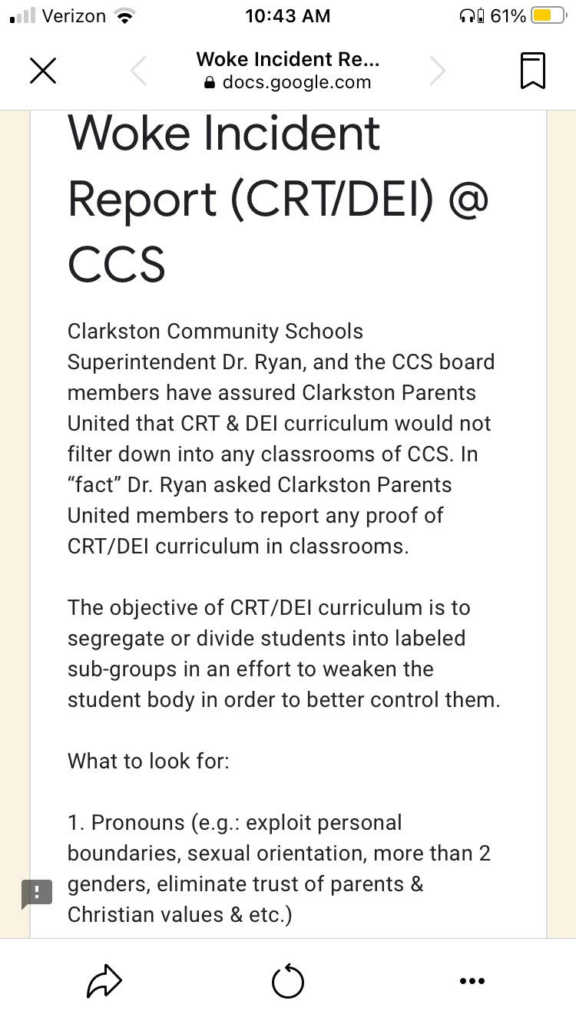 Clarkston Parents United is a 421-member private Facebook group created last September. At a previous school board meeting, Ryan asked the group to let him know if there was evidence that CRT/DEI was being implemented in the curriculum.

Elsewhere, Ryan states that CCS has no intention of introducing Critical Race Theory to the schools and that “we are very transparent about our process for evaluating and communicating curriculum changes in Clarkston.”

Still, the creators of the reporting form are not convinced. The form continues,

“The objective of CRT/DEI curriculum is to segregate or divide students into labeled sub-groups in an effort to weaken the student body in order to better control them.”

The group instructs members to look for “pronouns,” which it describes as exploiting “personal boundaries, sexual orientation, more than two genders,” and eliminating “trust of parents and Christian values and etc.”

What follows is a list of other dangers to watch for, including “Equity” and “Social Justice Curriculum.” It also lists “Gay Pride” as an example of an extremist group. 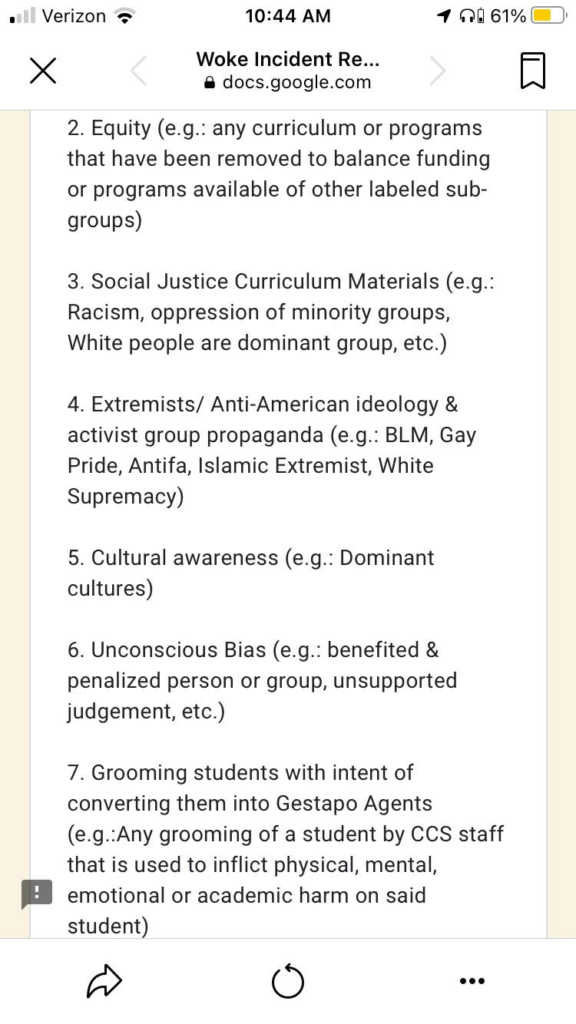 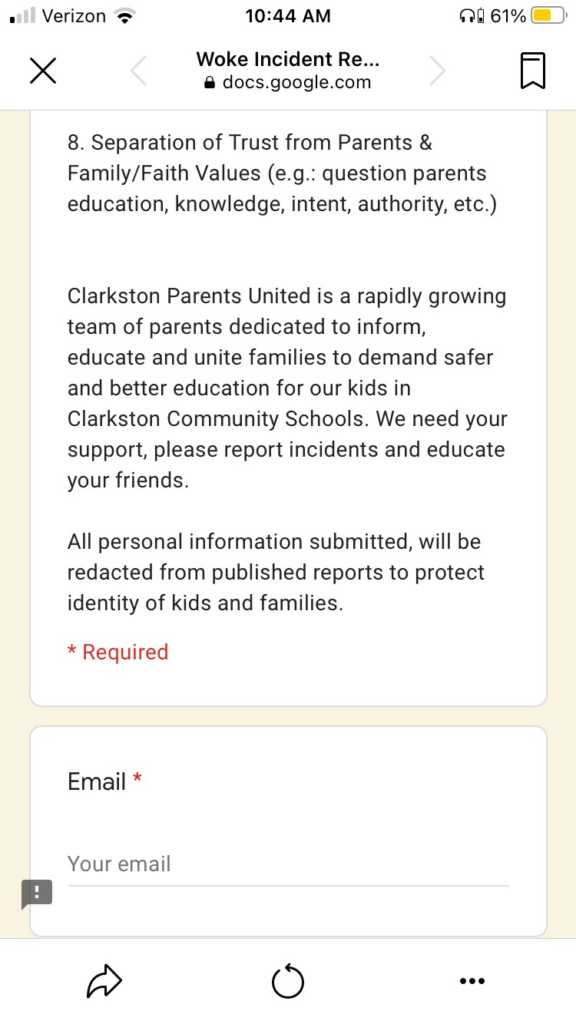 The form and its public responses were taken down Tuesday, Sept. 7. That may have been due to backlash in the form of fake, mocking “reports.”

Pride Source asked Beth whether this could be someone’s idea of a prank. She assured us it is no joke.

“This wasn’t a joke form,” she said. “They were totally serious. It’s like the ‘Twilight Zone.'”

Beth described the birth of Clarkston Schools Parent Advocates. One of their core tenets is in opposition to mask mandates meant to protect children from COVID-19. They are also opposed to vaccine requirements, COVID testing for asymptomatic individuals and quarantining if in close contact with an infected person.

The “About” section of the parent group simply states, “This page was created for Clarkston School District Families who support the return to normalcy in our districts [sic] classrooms.”

“This group first started when schools were virtual, and they would rally outside of the school board meetings, trying to get some children back into the classroom. So that’s where this group was born, and then it kind of ebbs and flows with whatever is bothering them that day.”

One issue the parent group has been up in arms about was the district’s appointment of two Diversity, Equity and Inclusion advisors.

Pronoun usage is of particular concern to the parent group, too. Beth commented that the upper classes in high school received a questionnaire that asked in part whether the student had preferred pronouns.

“That caused a big rift in our community,” Beth said. “People don’t want teachers teaching sexuality and about more than two pronouns in our school.” Beth’s child reported no problem with the content of the said questionnaire.

Some CCS parents are suspicious of their children’s teachers in general. Beth explained that because they belong to a union, the parent group assumes they are liberal and out to indoctrinate their children.

Beth knows enough about critical race theory to know it is not being taught as part of the K-12 public school curriculum. Yet, some parents aren’t convinced. “They believe that critical race theory will lead to their children feeling guilty for being white,” Beth surmised. “That’s a very simplified painting of what’s going on in Clarkston.” She hastened to add those in fear don’t represent the majority.

Since attending Clarkston schools herself, Beth has seen the community come a long way. Yet, she considers this group of parent “advocates” clearly homophobic.

“Their response definitely shows that they’re homophobic, and they are so out of touch with mainstream America where it is very common to state your pronouns before you begin a meeting or a signature in your email,” she said.

Clarkston has been a conservative area for a long time, and many are still siloed in their conservative ideology, said Beth. They see diversity, and they don’t like it.

“When I was in school, I had several friends that are now part of the LBGTQ community who could not be their authentic selves in school,” Beth recalled. “And now…we should be lifting these kids up, not making them feel like they cannot be themselves because if I was a parent of a student in that community, I would be horrified that there’s a group of parents who are against their children not being able to present themselves in the way they want.”

Beth understands that the Clarkston parents currently making noise don’t really know what critical race theory is or how it is separate from DEI training.

“They Google [CRT], and there’s a quick little paragraph in the first line. It says something about being a Marxist theory, and that’s where they lose it.” At the same time, she stressed how important DEI training continues to be for teachers in a community that remains overwhelmingly white, Christian and conservative.

Whether the originators of “Woke Incident Report” were serious or sarcastic, many of the responses were of concern to Beth. She said several of those had to do with pronoun use; others provided names of teachers.

“It really is disturbing, and it’s bad that we’re the laughingstock right now. I see other communities are sharing this and laughing at it. But it’s scary when it’s right here.”