Through their poetry, photography and writing, the self-identified “alien femme” duo Alex Jenny and Effee Nelly showcase a fully-realized depiction of queer and transgender love in a decidedly unique way.

The couple’s blog, appropriately titled “Alex & Effee,” is an outlet for the pair to express their creativity via elegant photo shoots and deeply personal prose, all the while representing everyday life as queer and trans people of color in a way that moves past the prevailing narrative of tragedy, pain and suffering. With 1,500 followers and thousands of likes on Instagram to-date, the duo’s passion project is seemingly only getting started.

“We wanted to create the representation we so desperately craved, one with trans love, happiness and glamour,” Jenny said. “We’re really trying our best to be open and vulnerable about our relationship in different ways and allow people to see what’s possible.”

Alex and Effee’s photography captures queer and trans love – or as we should really start calling it, love, without the qualifier – in a fashion that’s purely romantic. “Being in front of the camera was the most natural, yet still completely unexpected next step for me,” Nelly said, describing the initial stages of their photographic efforts. “As I was growing into my womanhood, I was very much yearning to create, to immortalize strength and beauty.”

“It pushed us in profound ways,” Jenny added. “Being able to go through this vulnerable process, and challenging ourselves, showed us we can be glamorous and confident and sexy and beautiful.”

Photos uploaded to both the blog and Instagram page are often coupled with poetry to tell a complete story. The pair’s art is intentionally vulnerable, Jenny said, and provides an avenue for them to connect not only with their online fans but also with each other.

“Our poetry is like the writing that we used to do in private and show each other in order to help each other be closer to another,” Jenny said. “I think that’s the major tying theme — really trying to present our process of trying to make sense of our experiences.”

For Nelly, writing poetry is an outlet to express the “hopeless romantic” side of herself that eschews cookie-cutter Hollywood love. “Love is absolutely where my art, especially my poetry, takes root … but love as in ugly-beautiful, messy, vulnerable, raw-real, sweet, sticky, earth-shattering, fire-bending, gravity-defying, watery, wavy, wavy love.”

Both Jenny and Nelly were first introduced to one another at a house party during their junior years at the University of Michigan. Jenny describes their initial encounter as “passionate, fiery and explosive.”

“I thought this would be a shooting star type of moment – we’ll combust and then live our own separate lives,” Jenny said. “I was telling my friends, ‘I think I love her,’ do I need to be institutionalized? I don’t understand – just met her, and I feel like I see my future.”

The pair married later in 2014 following their graduation from UM. Today, the couple live together in Chicago working day jobs in LGBTQ therapy and higher education consulting research, respectively.

Though they’ve been together for close to six years, the official Alex & Effee project didn’t begin until last year and was originally an idea the two concocted as an excuse to balance their day jobs and artistic endeavors. 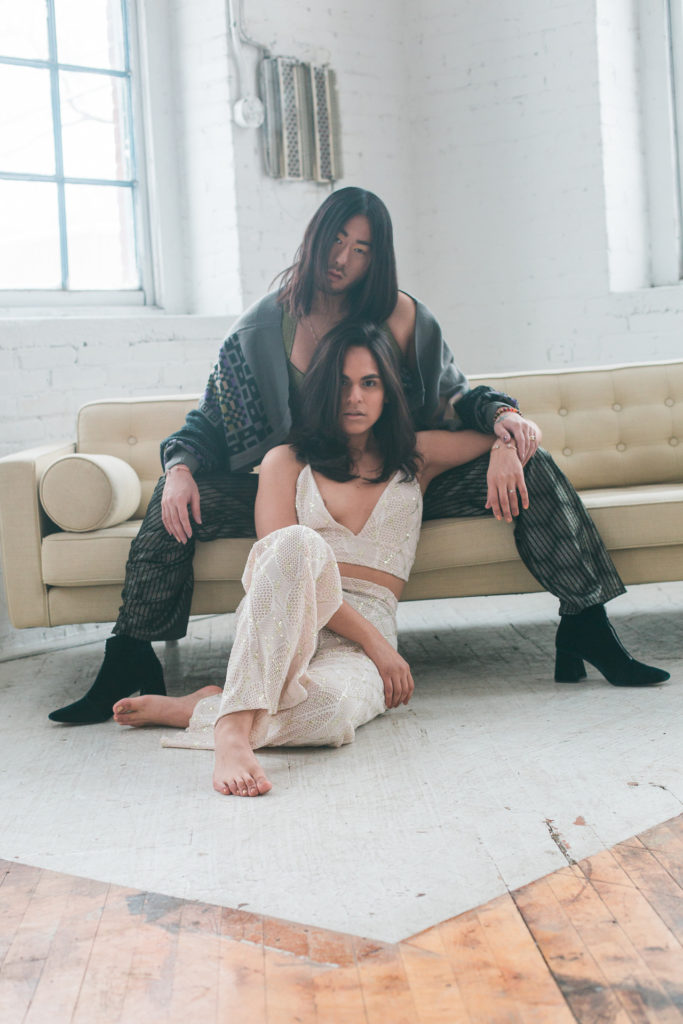 “We really felt like we weren’t investing in our art or poetry anymore in a serious ways,” Jenny told BTL.
What began as more of a personal project has grown into a public exercise of trans visibility and expression, allowing the couple to connect with members of LGBTQ community and other artists. One of the most profound responses they received to the blog came from a father inspired to capture his child’s transness on camera.

“I absolutely love when people feel more courageous to give into love once they read our pieces,” Nelly said. “One of our photographer friends tells me she had a father contact her to shoot his child’s high school senior picture because he wants to make sure his child’s transness is not only respected but celebrated – my heart is full.”

Jenny’s counseling job has afforded her many opportunities to speak about LGBTQ issues directly with community members. Originally from Grand Rapids, Alex returned to her hometown just this past week to give the keynote speech for Grand Valley State University’s Sexual Assault Awareness Month.

Jenny’s speech, which centered around the healing process in relation to trauma and depression, was followed by a Q&A session with students. While she wasn’t able to spend as much time as she would’ve hoped on each question, she said the session was a sobering reminder of just how far she’s progressed in the past several years.

“I spent time thanking everyone for being in that moment, because I was able to be in my hometown as someone my younger self would’ve never imagined,” Jenny said. “I came back to a place where a lot of trauma happened … I really wanted to emphasize that in my talk.”
Looking to the future, she hopes the blog can help her learn what kind of LGBTQ elder she wants to be.
“In a few more years I’ll be an elder because we don’t have many people to look up to because a whole generation were all wiped out from the AIDS epidemic,” Jenny said. “I’m pushing to hold myself accountable to what these kids need.”
As for Nelly, she says she dreams up a new goal for her art “every day.”
“I have many dreams,” Nelly said. “I want to travel more to meet and collaborate with creatives we love in person. I want to explore directing full editorials where our work is equal parts writing and visuals. I want to invite my friends and families more into my creative process, and even create more with them!”
“And sooo much more,” she added.