One of this year’s virtual displays during LGBT Detroit’s Cold as Hell event, which was titled “Dungeons in Detroit,” featured a self-guided pleasure demonstration with helpful tips that popped up on the screen during a film produced by the organization. The film wasn’t shy about its uncensored depictions of bondage, spit and flogging, where a whip is used for sexual arousal.

Held in February, Cold as Hell is the organization’s health-focused, leather kink and fetish Winter Pride event, and it’s another way the Michigan organization has been promoting healthy sexuality and fighting stigma around sex in the Black queer community.

“Providing education on these kinks, fetishes and other ways that we experience pleasure is the first step in destigmatizing it,” says Jerron Totten (he/him), program coordinator and legislative advocacy specialist for LGBT Detroit.

“As part of our scene, we did a penetration scene around toy play and what that looks like in a healthy way,” S’ango tells Pride Source. “I tried to make sure that the scene was promoting condom use with toys because there’s a lot of stigma around sex toys and sex toy use.” 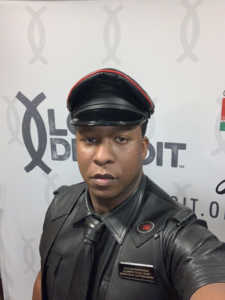 Sex positivity didn’t always come naturally to S’ango, who says he grew up in an atmosphere that didn’t exactly celebrate Black queer sexuality.

“A lot of us were raised that anything outside of missionary sex is deemed disgraceful,” S’ango says. “Growing up in Black households, the premise is always, you don’t ever want to embarrass your family, you don’t ever want word to get out that you aren’t ‘normal.’ Expressing any type of sexual curiosity or asking about [sex] in the home was never really something that was encouraged, at least when I was growing up in the ’80s and ’90s.”

Then, of course, there’s the stigma that exists inherently in the experience of not just being Black but being Black and queer. “In the vanilla Black gay community, anything surrounding kink, fetishes or wanting to experiment outside of sexual norms — it just was something that wasn’t talked about because the stigma would be that you aren’t normal or that there is something wrong with you.”

Ending stigma surrounding Black queer sexuality involves an understanding of the intersection of racism and homophobia, says Totten, who described his own experience with intersectionality.

“As a Black gay man, I have to worry about stigma, microaggressions [and] discrimination amongst our white counterparts because of what our country believes a Black man’s place is in this country, and how Black men are treated,” Totten says. “You see my Blackness before you understand my gayness.

“Then,” he continues, “I have to worry about homophobia with my Black heterosexual counterparts and the stigma that comes along with maybe some of our straight Black friends not understanding the various ways we choose to experience pleasure and the various ways in which we make attempt to reduce risk, reduce harm and reduce the spread of HIV infection.”

Totten believes that destigmatizing sex and destigmatizing HIV and AIDS go hand in hand. The well-received Cold as Hell event went a long way toward promoting sex positivity, as both he and S’ango can attest.

“Cold as Hell offers education from leather and kink experts from across the country,” Totten says. “And so you experience Cold as Hell to find out how to experience these kinks and fetishes safely and how to get the most out of [it].”

A still from LGBT Detroit’s Cold as Hell 3 film.

In the leather community, S’agno has conversations around consent, healthy connection in kink and leather, and kink practice. “Open communication around healthy sexual connection is important,” S’ango says. “Shame is something that unfortunately, we will have to work through for some time, but we will get to the other side.” In his day-to-day work, S’ango is a sexual health peer navigator for AIDS Action Baltimore.

S’ango is also one of the featured panelists for “The Sex, Hooking Up and the Apps” tour (SHUA), LGBT Detroit’s annual spring anti-HIV stigma educational event. Running March 29 to April 1, the tour will make stops at the University of Michigan Dearborn, Wayne State University and the College for Creative Studies. There will also be a community tour night at LGBT Detroit March 31.

SHUA is part of LGBT Detroit’s project “Togethr,” the tagline for which is “Live openly. Play togethr.” The campaign has been made possible by over $300,000 in grants from the state and the city of Detroit to combat HIV stigma in the Black and Latinx LGBTQ+ community. “Not only are we dismantling erroneous stigmas about HIV, but we are doing this while speaking to a broader audience to circulate a positive, healthier way of living,” said LGBT Detroit executive director Curtis Lipscomb in a statement.

SHUA focuses on HIV education in two ways. First, more broadly — how it’s transmitted, how it’s not transmitted — as well as a lesson on a 2019 update to Michigan’s HIV Criminalization Law. That was an initiative championed by openly gay former state Rep. Jon Hoadley. Before that time, the law didn’t keep pace with scientific evidence that undetectable equals untransmissible, as it pertains to HIV infection.

“As a public health worker myself, and somebody that’s very interested in policy around LGBTQ individuals, I thought that was something that was groundbreaking and definitely necessary to talk about,” he says.

S’ango has the perspective of someone in the leather and kink lifestyle who is equipped to provide guidance to the students on how to hook up on certain apps safely or meet in other ways. “Especially in a post-Covid world, a lot of folks are a little thirsty for time and attention,” he says.

Both S’ango and Totten emphasized communication, education and openness as ways to combat sex stigma.

“Whether you want to actually explore or not, curiosity is where things start — just being able to have open conversations and spaces to have these conversations,” S’ango says. “I believe LGBT Detroit is definitely spearheading that movement.”

The SHUA destinations and their tour dates are the following:

The sponsors for the college tour include the Michigan Department of Health and Human Services and Counter Narrative Project. In addition, Black Bear Brotherhood and Adodi Detroit will serve as the project’s community tour night partners.