Without fanfare or discussion, the Village of Holly Council unanimously passed a resolution declaring June 2022 as LGBTQ+ Pride Month at their Feb. 8 meeting.

Introduced by Council member Ryan Delaney, the resolution states that the Village Council:

“recognizes and values the dignity, humanity, and unique contributions of each individual person in our community; believes firmly in the principles of freedom, equality, and justice for all; welcomes all people and believes everyone deserves a space where they can live, work, and play while feeling safe, happy and supported by friends, neighbors and the community; recognizes and appreciates the cultural, civic and economic contributions of the LGBTQ+ community, and is committed to ensuring that our LGBTQ+ community and its members feel safe, valued and empowered in our community and that they know they have the support of village leadership.”

The resolution is similar to resolutions passed in other cities, including Ferndale, Hazel Park and Madison Heights.

Delaney told Oakland County Times after the meeting that “I believe it is important that our LGBTQ+ residents know that their dignity is recognized by their community and that they are supported by their local government.

“Actually, I think that this resolution is the very least we can do for our LGBTQ+ residents — and there are many in the Village — and that there is much more that we could do and should do by way of protecting their rights and ensuring that they are free from discrimination.” 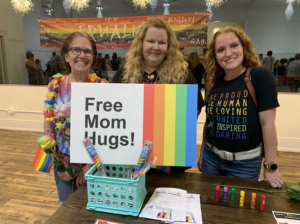 Holly had their first Pride event in 2021, with nearly 100 people gathering at the Holly Vault Collection’s Venue 111.  Though pictures show Holly’s first Pride as a sea of smiling faces with waves of rainbow clothes and flags, there was also a layer of pain, sadness and fear that connected those in the room who understood that being gay, lesbian, bisexual, transgender or queer is not easy in spite of the progress that has been made.

Parents still disown their gay children. Landlords still turn away same-sex couples, making it harder to find housing. People still live in fear because they can be fired for who they love or how much they stray from stereotypical gender roles.  Kids — and adults — face name-calling, harassment and violence. Fear of being themselves, or even shame, takes a psychological toll. And in spite of legalized same-sex marriage and the wave of LGBTQ+ people in the public eye, there is still a long way to go for those who want to simply feel accepted as the human beings they are.

Jerome Raska co-owns Blumz along with his partner Robbin Yelverton.  The couple expanded their floral business from Ferndale and Detroit to downtown Holly several years ago.

“I feel inclusivity makes a community,” Raska said. “Designating June as Pride Month helps substantiate the village of Holly as a community of acceptance and diversity. We are very pleased to be part of the Holly business community.”

For Village Council President Tom McKenney, the answer to why he supported the proclamation is the same simple Latin phrase printed on the Great Seal of the United States: “E pluribus unum!”

Out of many, one.