Fielding questions during his confirmation hearing, Pete Buttigieg started his path Thursday toward becoming the first openly gay Cabinet member confirmed by the Senate, promising infrastructure would be key in the Biden administration.

Buttigieg, who made history as a gay candidate during the Democratic presidential primary, said in his opening statement before the Senate Committee on Commerce, Science & Transportation as transportation secretary he’d ensure infrastructure would be key to addressing economic and climate issues.

“By creating millions of good-paying jobs revitalizing communities that have been left behind, enabling American small business workers, families and farmers to compete and win in the global economy and tackling the climate crisis,” Buttigieg said.

“Getting people and goods to where they need to be directly and indirectly creating good-paying jobs, but I also recognize that at their worst misguided policies and missed opportunities in transportation can reinforce racial and economic inequality by dividing or isolating neighborhoods and undermining government’s basic role of empowering Americans to thrive,” Buttigieg said.

If confirmed, Buttigieg would be the first openly gay person confirmed to a Cabinet-level role.

Buttigieg, in his testimony marking the first time an openly gay person faced a confirmation hearing for a Cabinet-level position, also made sure to thank his spouse Chasten Buttigieg, who was seated behind him in the room.

“I’m really proud to have him by my side. I also want to take this chance to thank him for his many sacrifices and his support in making it possible for me to pursue public service,” Buttigieg said.

Among them is public transportation, which Fowlkes said is taking a hit in revenue because of the decrease in tax dollars amid the coronavirus crisis.

“It’s so important, especially for Blacks and other racial minorities who can’t afford cars or live in places like New York or Chicago, where having a car is…nice, but it’s not really always realistic when it comes to parking, upkeep, and insurance,” Fowlkes said.

Buttigieg enjoyed a largely favorable reception during the hearing. Of particular note: The first confirmation hearing for an openly gay nominee to a Cabinet-level position included questions from LGBTQ committee members.

Sen. Tammy Baldwin (D-Wis.), the first out lesbian in the Senate, started her questioning by asking Buttigieg if he’d support “Buy America” initiatives. Buttigieg said he would. Sen. Kyrsten Sinema (D-Ariz.), the first out bisexual in the Senate, asked Buttigieg how he’d maintain COVID safety in the transportation system. Buttigieg responded that the first step is enforcing the mask mandates instituted by President Biden on his first day in office.

Sen. Amy Klobuchar (D-Minn.), who feuded with Buttigieg during the presidential primary, also queried Buttigieg, but their friendly exchange signaled that friction was in the past.

“I think you know I’m excited about your nomination,” Klobuchar said, adding, “I know you well, and I can attest to my colleagues what a forward-thinking and thoughtful secretary you will be.”

One moment of controversy during the hearing was when Buttigieg openly mulled raising the gas tax under questioning from Sen. Rick Scott (R-Fla.) about the highway system.

“As you know the gas tax has not been increased since 1993, that’s never been pegged to inflation, and that’s one of the reasons why the current state of the Highway Trust Fund is that there’s more going out than coming in,” Buttigieg said.

Picking up on the hint of a tax hike, Sen. Mike Lee (R-Utah) pointed out the gas tax is regressive and suggested revenue could be found by cutting spending under the existing gas tax. Sen. Jon Tester (D-Mont.), however, backed up Buttigieg and said the time may well have come for an increase in the gas tax, referencing a highway south of his farm that saved farmers thousands of dollars in transportation costs.

“Why? Less flat tires, front ends aren’t knocked out of line, less wear and tear on vehicles, so you can run them longer,” Tester said. “That is why we need to make sure rural America is taken care of. I don’t pay enough gas tax to fund a project that would put that highway in. But the truth is all of us working together as Americans, with the gas tax fund we’ve done it.”

No questions related to Buttigieg’s sexual orientation came up during the hearing, marking a change from the 1990s when being gay was explicitly a reason gay appointees like Jim Hormel and Roberta Achtenberg faced opposition in the Senate.

The only time it came up as an issue was a positive reaction from Sen. Gary Peters (D-Mich.), who pointed out Chasten Buttigieg, still sitting in the back row, was a fellow native of Michigan.

Sen. Ted Cruz (R-Texas), however, made sure Buttigieg didn’t get through the hearing without any bumps. The Texas Republican challenged him on President Biden’s decision to nix the Keystone XL pipeline, which has been opposed by environmental activists, on his first day in office.

“That is a major infrastructure project,” Cruz said. “That is a project that right now today has 1,200 good paying union jobs. And in 2021, the Keystone pipeline was scheduled to have more than 11,000 jobs, including 8,000 union jobs for contracts worth $1.6 billion.”

Buttigieg stood firm, reminding Cruz of the campaign promises Biden made in this election, and predicted an approach to energy that paid heed to climate change would bear fruit.

“I think the most important thing is to make sure that we make good on the promise of the president’s climate vision as being one that on net creates far more jobs millions,” Buttigieg said.

Cruz wasn’t having it, saying the response amounted to Buttigieg telling potential workers on Keystone XL “somebody else will get a job,” but Buttigieg shot back.

“The answer is that we are very eager to see those workers continue to be employed in good paying union jobs, even if they might be different ones,” Buttigieg said.

Cruz concluded by asking about an energy regulation, which blocks the transportation of liquefied natural gas by rail, and whether the Biden administration would consider repealing the measure. When Buttigieg said the best answer he can give is taking a look, Cruz said the response was “disconcerting.”

An aide to a Republican senator on the committee was rosy about the prospects of Buttigieg enjoying GOP support in his confirmation.

“Transportation is an issue both sides can work together on,” the aide said. “I think Republicans are looking forward to working with him and will support his confirmation.”

Next up for Buttigieg is a committee vote, followed a floor vote in the Senate, which would also require a vote to invoke cloture if any one senator objects and filibusters. A simple majority would be required to confirm Buttigieg as a presidential nominee.

Buttigieg has one week to submit his questions for the record, a Senate aide said, and then he is able to be placed in a markup for committee vote. The office of Senate Majority Leader Chuck Schumer (D-N.Y.) didn’t respond to the Washington Blade’s request to comment Wednesday on the timing for confirmation. 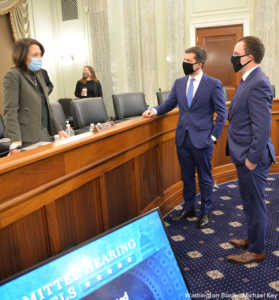