It’s just days before the primary elections, and candidates running for office took one of the last remaining opportunities beforehand to talk to LGBTQ folks during the 23rd annual Hotter Than July celebration. The second oldest known Black Gay Pride in the world, HTJ organizers have long invited candidates to participate in the multi-day festivities during election years. At the annual conference on Friday, gubernatorial candidate Abdul El-Sayed was most vocal on his support for the LGBTQ community.
“This is not my first time at Hotter Than July,” El-Sayed said. “I used to come and speak with the community back when I was health commissioner for the city.” 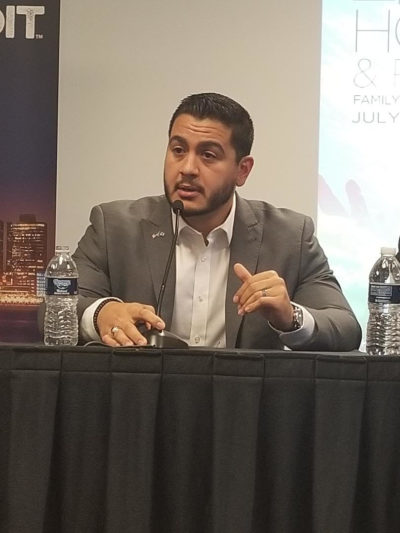 In speaking to the challenges faced by LGBTQ people across the state, El-Sayed said that right now, “The rights of LGBT Michiganders are not enumerated in our constitution and we’ve got to change that.”
“We’ve got to amend Elliot-Larsen to make sure that it specifically enumerates protections so that folks have access to basic things like a job, housing and health care independent of who they are, because those things ought to be human rights in the first place,” he said. “It also means that we’ve got to stand up and our police have got to start paying attention to an epidemic of violence we’re starting to see, particularly against trans women of color.”
El-Sayed then talked to issues that LGBTQ students might face.
“We’ve got to stand up against the bullying that we’re seeing in our schools,” El-Sayed said. “It seems like people are more worried about telling people what bathroom to use than making sure that they are safe and comfortable and in the places they learn every day.”
State Senator Coleman Young II, who is running for Congress in the 13th district, also spoke directly to the LGBTQ community.
“You are human beings and there is no reason you should lose your job because of who you love,” Young said. “There is no reason that you should be denied access to go see your loved one in a hospital because of who you love. There is no reason why the government should not be working overtime to make sure we are providing the necessary investment with expanding the Ryan White program, which is something that I want to do to make sure that we treat people with HIV and AIDS. This is something that I think is one of the most important causes of our times. And I don’t think that people should be losing their lives or having their humanity denied because of who you love.”
On Saturday, gubernatorial candidate Gretchen Whitmer made an appearance at the annual HTJ picnic in Palmer Park where she made her case for the LGBTQ community.
“We’ve got to make sure that gay couples can adopt,” said Whitmer. “There are children who need homes and there are couples who can provide those homes. Stop letting these so-called pro-family groups kill the ability of ours to provide good homes for kids who need them. And no matter who you love or how you identify you deserve full civil rights under the law and we will not rest until we amend our constitution.”
Shri Thanedar had originally committed to speak at the conference but canceled. Other candidates at the conference included Green Party gubernatorial candidate Jennifer Kirkland and State Senator Ian Conyers who is also running for congress in the 13th district.

Organizers ‘Thrilled’ with Success of Pride
Campaigning aside, organizers are calling the nearly week’s worth of HTJ activities a success. A crowd of nearly 100 showed up Tuesday in Palmer Park for a community chat with Detroit Police Chief James Craig, which was followed by the traditional opening ceremony and candlelight vigil. The Wednesday night opening party at the Woodward and Thursday’s fine art reception at the Virgil Carr Center were also highly attended. About 75 people attended Friday’s conference and just over 50 came out to Sunday’s closing brunch.
And at Saturday’s picnic in Palmer Park, the anchor event for the celebration, sunny skies and temperatures in the low 80s brought out the largest crowd in some time.
“I’m thrilled,” said Curtis Lipscomb, executive director of LGBT Detroit, the agency that produces HTJ. “Hotter Than July certainly met my expectations.”