MADISON HEIGHTS – On Tuesday, May 29, Madison Heights read into record a proclamation declaring June 2018 as Pride Month for the city. About 15 members of the LGBTQ community were on hand to rally and show their support at city hall.
Before the meeting, Mayor Brian Hartwell shared a prepared statement. It read, in part,
“The recognition of Pride Month by the City of Madison Heights is a statement of love and acceptance. We believe—what should be obvious to people with love in their hearts—that people are born free and are equal in dignity and rights regardless of qualities such as their sexual orientation or gender identity.”
“As mayor, as a city council, as a city government representing 30,000 residents, we embrace all of our brothers and sisters with pride, and say to our residents, you deserve safety, comfort, respect, and – if you want it – the right to be left alone. Most importantly our residents deserve to hear from their government officials that we will treat everyone equally. The month of June is a convenient, historic time of year for us to recognize Pride. I encourage members of city council to adopt a Pride resolution tonight. I encourage city employees to strive to protect the rights of all residents. I invite members of the public to celebrate their identities, to have pride in themselves, and pride in the City of Madison Heights.”
Hartwell told BTL, “As a politician, when I present resolutions, like the resolution tonight for Pride Month, critics will always question, ‘why are you doing this? We have no problem in Madison Heights, everyone gets along.’ But that’s just not true. There’s still discrimination in every city, in every segment of our economy.” 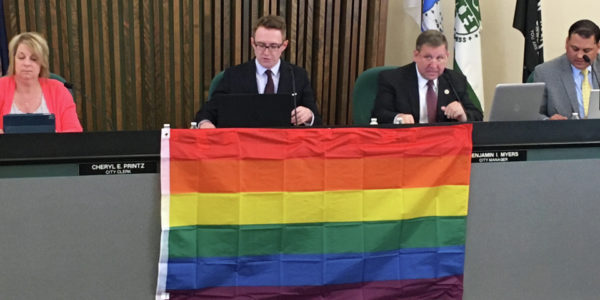 Madison Heights does not have an inclusive human rights ordinance, despite persistent efforts by Hartwell over the years. “The best I was able to get passed was a resolution from our city council asking our state leaders to not create any laws that would discriminate,” he said, “I had support from religious groups, business groups, charitable groups and residents, but I could not get a majority of the elected officials on the council to say, ‘yes, bring it to a public debate.’ So it never made it to public debate.”
Coincidentally, Hartwell had plans to attend a rehearsal for Prism, the men’s chorus, just before the meeting. Prism rehearses at a church in Madison Heights. “I can’t wait to hear their music,” he said, “It will give me a little bit of inspiration before I go into the public meeting.”
The effort for the resolution was spearheaded by 18-year-old college student and lifelong Madison Heights resident Emma Green. Green is a student at Ohio Northern University, where she is studying politics, philosophy and economics, with a minor in public policy.
“I try to stay involved with Madison Heights as much as I can,” she said. “My passions in life are public policy and public service and trying to give back to the community that’s already given so much to me.”
Green was inspired to draft the resolution by her work with Amnesty International, whose focus for the month of June is LGBTQ rights. This also coincided with the city of Hazel Park’s passage of their own resolution one week ago.
Green shared that she is a proud member of the LGBTQ community. “I’m bisexual, so this is something that’s always been important to me, to be recognized by elected officials.” she said, adding, “the city’s slogan is ‘city of progress.’ And so, this is pretty progressive.”
Originally, Green had planned with Hartwell to present the resolution at the June meeting, but they were able to move it up to May. Things came together pretty quickly, with Green sending out a message to rally support via social media Monday evening. She purchased a Pride flag from Affirmations on her drive over, which, with Hartwell’s help, was prominently displayed in city council chambers before the meeting began.
Green spoke eloquently at the meeting on the history of LGBTQ discrimination, and on the importance of the resolution. She cited Mike Pence’s support of “conversion therapy” and current events including the recent decision in Oklahoma regarding discrimination against LGBTQ couples seeking adoption. Green decried the complacency of Madison Heights in general, quoting Desmond Tutu: “If you are neutral in situations of injustice, you have chosen the side of the oppressor.”
Photographer Tih Penfil, who has been documenting Motor City Pride for 30 years and is a Madison Heights resident, has “been in the fight for 40 years,” and was the first to speak during public comments. “The action taken today by this group, and by this young woman, Emma, shows extreme courage, intelligence and dedication, [and] is going to open things up for the youth of this town, it’s going to open things up to the minds in this town that maybe haven’t been open enough.”
She recalled her experience over the years planning Motor City Pride, “for people who didn’t have much pride when it started, and I remember when the FBI would be on the top of the buildings in Detroit during the parade to video whoever was there, go after them and do backgrounds. So from that lead to now is major. And a proclamation might seem like a small thing, but it is a very large thing. It is saying, ‘we are accepted as neighbors, we are accepted as friends, we are accepted as part of this community,’ and that is a major thing.”
Brianna Dee Kingsley, chief operating officer for Equality Michigan, addressed the city council next, thanking them for exercising their leadership in declaring June Pride Month in Madison Heights. “What that says to the overwhelming community, is that you are open for business. That is a very powerful business message of inclusivity and honoring people’s integrity to be their true selves at home, at work, at church and in their community. So thank you for taking the time to make this proclamation, because as you are aware, we don’t always have these kind of positive messages. So this is a glimmer of hope. It is a light in the dark that in our community that we can be included.”
Kingsley went on to point out that Madison Heights lacks an inclusive human rights ordinance, referencing more than 40 municipalities in Michigan who do. She described the recent ruling by the Michigan Civil Rights Commission, which now interprets “sex” discrimination to include discrimination based on sexual orientation and gender identity. Kingsley encouraged the city council members to continue to be on the forefront on these issues.
Finally, the city council heard from Stacey Winn, a resident of Madison Heights since the age of ten. “I’m a little emotional today,” she said. “Emma – I’ve known her for quite a while – she frequented our house as most marching band kids do. She has made me beyond proud today. I am a gay woman, who came out much later in life, and still find it very difficult. We have a wonderful community of young people that have supported me in ways that I have never thought would be possible. And I just want her to know how proud I am of her for doing this.”
After the meeting, proud community member Val Bralt, who serves on the boards of TG Detroit, GNA and MCC Detroit, summed it up. “With so many communities behind the ball with regard to rights of disenfranchised groups, I’m glad to see that Madison Heights is going to be ahead of history instead of trailing it. Congratulations, Madison Heights.”