A Metro Detroiter's Big Plans for a Tiny Home

If Alexander Weyer had to put a postmark on when he decided to build a tiny home, he’d guess it started about three years ago just as most of his thoughts begin: under the stars.
Weyer, an openly gay practicing astrologer and herbalist, was visiting a friend one night in Detroit, thinking about life’s grand design and how freeing it would be to downsize.
“It was my friend who was playing with the idea of having a tiny-house community together and how idealistic and free-feeling it would be,” he said. “I think what attracted me most to the idea that night was the thought that I could be so much closer to my friends and my community if we all lived small and together.”
In just over a year, Weyer began building a tiny home in Chelsea, Michigan. This spring, he was invited to join a burgeoning community of people living small in Detroit’s Brightmoor neighborhood. 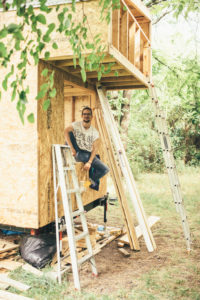 “I wouldn’t say so much that I ‘chose’ to bring my tiny house to Brightmoor, I don’t feel that those pursuing the building of tiny homes have much ‘choice’ when looking for places to do so,” he said. “I would more likely say something along the lines of it was ‘simply in the stars and total synchronicity.’”
Weyer grew up the youngest of three in a moderately sized home in Novi, Michigan. A departure from his upbringing, Weyer saw a tiny home as an opportunity for him to reduce his carbon footprint and live a life off the grid by changing himself. He will move his astrology business to his tiny home, and it will become the hub for all his herbal medicines. He is so committed that he said he could even see himself traveling in the future to ethically source his herbal remedies — a commitment that he said wasn’t easy make at first.
“I wasn’t quite sure it was for me right away, but the thing I admired most about the people who were choosing to do so in actuality was their sense of commitment to change themselves and their lifestyles, so dramatically, for a lot of incredibly noble and whimsical reasons,” he said. “That commitment to drastic change seemed frightening yet enlivening to my senses and I knew I wanted to explore the idea further, even just to satisfy my imagination.”

Today, Weyer added, “It’s so much a part of my life now I can barely remember when it started.”
Living tiny for him, he said, “is also about me having to spend less time on keeping track and care of my ‘things’ and my ‘spaces’ and be able to focus more of my vital energy into my work and the impact I seek to have with the people I can reach in my communities.”
“The subconscious awareness that I have a basement that’s been waiting to be thoroughly cleaned out for the past 12 years can be an incredible sap of energy on one’s life without even realizing the full extent of it,” Weyer said. “I seek to take care and rid myself of all the extraneous saps of energy on my life that hold me back from giving my all to the present and our future.”
For now, Weyer will be living in the home alone. But he is open to visitors who want to experience living small for a few nights. For anyone who is considering building a tiny home, Weyer offers up a bit of advice: “Don’t be afraid to play with your life.”
“If you can make it work and you feel called to make drastic change for the idea of the better, why waste time pretending you don’t?” he said. “Begin now, because the time will pass anyway, and I bet you’d rather wake up in three years living your dream life rather than wishing you had started three years ago.”
Weyer reminds those who want to live in a tiny home that they can always sell it or rent it out at any point if it doesn’t work out. 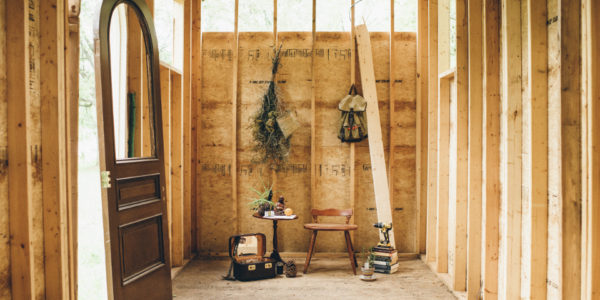 “But seriously, be prepared to give yourself at least three or four times as much time as you think you’ll need to get this done, yet know that it has the capacity to feel at least 10 to 1,000 times more worth it than you can imagine at this stage,” Weyer said. “Like life, it will be best if you can think of the journey and process of building it as the destination rather than rushing to reach the finish line. Also like life, don’t be afraid to ask for help, you’ll need it.”
When asked what his favorite part is about this particular project, Weyer said, “Perhaps my favorite part about standing inside the framed structure of my future is that it feels so all-encompassing and accurately reflective of who I am as a whole person.”
“Every decision about this project from the dream of it to laying the first piece of plywood down as my subfloor, has been mine,” he continued. “This isn’t someone else’s leftover shell that I’m moving into, it’s something that I am personally bringing into reality straight out of the ether, and it’s an incredible privilege I’m aware that I get to feel this way. It feels a bit like being a pioneer I suppose. Exploring a new territory in lifestyle choices.”