Thousands of LGBTQ people from Southeast Michigan and beyond congregated on Saturday, June 1, to kick off pride month together at Ferndale Pride 2019. The ninth annual festival included a strong lineup of vendors from across organizations; performances from Southeast Michigan staples like Sabin and national acts like Shamir; activities ranging from a rock wall to face painting; and unprecedented support from both local and state politicians. The event began with an official address at the MotorCity Casino Main Stage by Ferndale Pride Executive Director Julia Music who thanked her team of volunteers, the local community and the city’s politicians for making the festival possible.
“We know that Ferndale is a welcoming and affirming community. This commitment to inclusion comes from the citizens as well as our local government,” Music said. “For the last nine months, volunteers from all across Southeast Michigan have worked to create a festival that educates, celebrates, spotlights talent, allows progressive businesses to flourish and showcases the outstanding organizations that provide services to our community.”

Farewells and New Beginnings
Music then announced that Ferndale Mayor Dave Coulter would be taking the stage for the last time in his official capacity as his term ends officially in January of this year. He used the time to reflect on the progress made over the course of the Ferndale Pride’s existence in the city, citing the importance of the unique political presence in attendance this year.
“We have never had in the nine years that I’ve been Mayor and in the nine years that we’ve been doing Pride here, we’ve never had a statewide elected official at pride before. … But we have not one but two statewide elected officials here to show their support including the first openly LGBT elected official at the statewide level in Michigan,” Coulter said. “I mention them and the others because it’s important to know. I’m a little old and when I ran for office in 2002 there were no Dana Nessels, there were no Jeremy Mosses, there were no people in the state legislature — certainly not at the statewide level.”
Coulter went on to say that this kind of LGBTQ visibility is important to ensure that future generations of LGBTQ leadership can be inspired and put forth more inclusive policies and have “role models and understand that this is possible for them.”
“That if Dave Coulter can be the mayor of Ferndale and Dana Nessel can be the attorney general, then maybe I can be the governor someday, or the president someday, so it’s so important that they are here,” he said. “And by the way, our allies as well, so the Jocelyn Bensons and the Robert Wittenbergs and the Andy Levins. It’s important that they stand with us, again, so that those young people know they’re not alone and so they can go as far as their talents and their passions take them.”
Coulter ended his address by giving a final thanks to those who have supported him during his time in office. Next, Jake Cunningham took the stage, Oakland County’s first openly gay circuit court judge, giving a nod to the upcoming 50th anniversary of the Stonewall Riots. He spoke of the value of the existing progress made regarding LGBTQ equality but also emphasized the value of a continued work ethic toward ensuring full equality in the future. His sentiments were echoed by Sen. Jeremy Moss, who followed up with an address of his own.
“I’m excited about pride, I’m excited about the month ahead, I’m excited to at long last, finally represent Ferndale,” he said. “This is the first time that not only Ferndale has LGBT representation at the state level but I’m actually the first and, so far, sadly, the only openly gay member of the state Senate so we still have a long way to go to get representation at the state level, but we are still pushing forward our issues, we are still moving the conversation and gaining allies every single day in the state legislature.”
He urged those in attendance to remember the deeply political roots of pride and reminded them of the existing holes in the Elliott-Larsen Civil Rights Act which still does not protect the LGBTQ community.
“I’m so excited that we have someone in the governor’s office that support us, invites us into the discussion and gives us a seat at the table and that’s Gretchen Whitmer. On Tuesday we will be introducing an expansion to the Elliott-Larsen Civil Rights Act to at long last include gender expression, gender identity and sexual orientation as protected classes in the state of Michigan,” Moss said. “I will introduce the bill, we have great allies like State Rep. Robert Wittenberg who will be joining us in the governor’s office itself — that’s a big statement to make.”
Current Secretary of State and LGBTQ ally Jocelyn Benson followed after Moss’s speech, expressing her overall support and work to make services like ID procurement at her offices simpler for the LGBTQ community. The final political address of the day was from openly lesbian Attorney General Dana Nessel. She recounted her successes in targeting LGBTQ-related discrimination and hate crimes and listed some current and future projects.
“We are working fulltime to ensure that anybody who is targeted for a crime, a crime of bias based on their sexual orientation, based on their gender identity, that you will have a voice,” Nessel said. “we were asked by the Civil Rights Commission to reconsider an attorney general opinion that was issued last year by my predecessor which expressly excluded LGBTQ people from the Elliott-Larsen Act. I said two words to him: bring it. So, we are currently working on that opinion and I think it’s going to be issued just in time for pride month. … And there’s plenty more where that came from.” 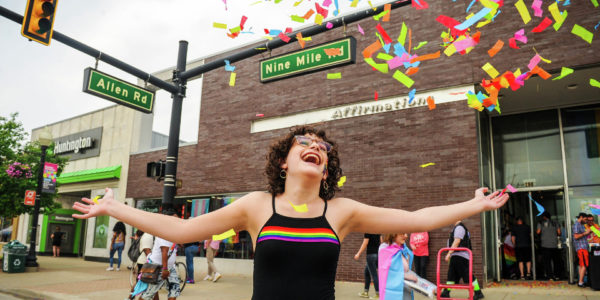 Pride Starts With a (Confetti) Bang!
Immediately after the political addresses, confetti canons went off at the Affirmations LGBTQ community center marking the official start of the event’s festivities. Standing in the rainbow-filled street in front of the center, Executive Director Dave Garcia said he was thrilled to be back in his home state and in time for Ferndale Pride after having worked in Los Angeles LGBT Center for a period of five years.
“It’s great. I am so happy to be home for personal reasons, just to be close to family, but also this is my home,” he said. “I grew up here in Michigan, in the last five years I’ve learned a lot in Los Angeles but I always knew I’d come home and I wanted to bring what I learned at the largest LGBT center back here.”
That joy and support of Ferndale was visibly shared by attendees, too. Tyrone Thomas said he attended pride because of Ferndale’s welcoming and affirming character.
“There’s definitely a sense of community and a sense of home,” Thomas said. “And Ferndale has always kind of seemed like a very liberal very relaxed environment and definitely [has a] sense of community. Everyone is very welcoming and very happy.”
Pridegoer Mark Kindall agreed, saying that the ability to “walk around and be open” was what drew him to the festival this year.
Allies made their way out to support the LGBTQ community on Saturday, too. Jamee Perryman was walking through the crowd with her friend Danielle Gentner when she told BTL that she was in attendance to support her cousin.
“[She’s] gay and she will be here soon, so I’m here supporting her and her fiancé and just having a good time,” Perryman said. “I think it’s sad that pride has to be held, I think we should all be celebrated all the time but the fact that there are people that don’t think that the people who are part of pride should be celebrated is a problem.”
“Because we’re all human beings,” Gentner added.

Vendors and Sponsors
Among the variety of vendors and booths present at the Festival this year, one highlight included the Sober Space put on The Center for Relationship and Sexual Health. Social Worker Mark McMillan said that this year was the first year that Ferndale Pride had a mental health organization sponsor the space.
“I think any type of public venue, festival, anything around today should have a safe space, if it’s not called a sober space, for those who may be struggling or in recovery to come,” McMillan said. “And this year, besides feeling safe, we’re offering a line of education not only for those who may need that extra bit of safety while they’re enjoying things but others as well to gain information about their loved ones, their family or maybe about themselves, too. Often, someone may not want to disclose and talk openly so that having resources available may help them to receive help at a later time.”
Also in attendance was the Gift of Life tissue and organ donation organization. Volunteer Pamela Bynum said that events like Ferndale Pride have been instrumental in ensuring that those in medical need, like the HIV-positive community, have been able to receive organ and tissue donations.
“It’s important to let them know that they’re human and that they’re important as well. Everyone else can donate and they can donate as well and last year we signed up about 278 people through this event,” Bynum said.
Regarding Sponsorships, Executive Director Music made sure to publicly thank every individual and organization that sponsored the year’s event.
“I personally would like to thank the Candle Wick Shoppe for having our backs since day one. They signed on as naming rights sponsors since the day we opened sponsorship, and we’re proud to have their business’s support financially and to have them as an equal-opportunity employer in the city of Ferndale,” she said. “Our Diamond Sponsors include State Farm, the Candace Eckham Agency, Mojo in the Morning, SMART Bus, Rosie O’Grady’s, Pop’s for Italian, One-Eyed Betty’s, Fifth-Third Bank, Axel Brewing Company, Baker College, The Graphics Geek and Ferndale Elk’s 1558.”
Though that list only includes a portion of those who contributed to this year’s Ferndale Pride event, perhaps ally Zoey Blase underscored the value of those sponsorships in the true spirit of pride, particularly on its 50th anniversary.
“I came to support my friends because I want them to know that I’m proud of them,” Blase said. “And I love them no matter what, for who they are.”