She hasn’t even taken office yet as the new president of the Human Rights Campaign (HRC) and already Kelley Robinson, who’ll take the big chair Nov. 26, is on tour. She’s been stumping to get out the progressive vote and stopped in Michigan on Nov. 1.

At the moment, the biggest role HRC is playing in the state is co-chairing the Hate Won’t Win (HWW) campaign. HWW is an effort to counteract egregious and glaringly anti-queer ads designed to fire up the Republican’s outdated base. HWW has also, in recent months, aggressively helped educate and register new voters, receiving more than 38,000 pledges to vote.

“We are so proud to be co-leading the Hate Won’t Win coalition with our friends at Equality Michigan,” said Robinson, who added that HRC has made “an incredible investment in the state of Michigan that’s not just about an election cycle but building power.”

Robinson went on to say to say that pro-equality voters are “fired up” but warned that the issues of the day, including the fight for bodily autonomy, gender-affirming care and “the right to make decisions for ourselves and our families” will not suddenly go away after the election. It’s a fight that must continue. “All of these things are intertwined, and no community gets it better than the LGBTQ+ community because we’ve experienced it generation after generation.” 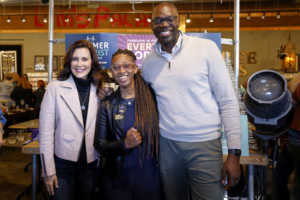 To lead HRC, Robinson will be leaving her position as executive director of the Planned Parenthood Action Fund. And though she hasn’t even officially started at HRC yet, Robinson has already impressed folks here in Michigan. On Tuesday, Robinson spoke at a ONECampaign for Michigan women’s event with Gov. Whitmer and Secretary of State Jocelyn Benson. She also participated in a HWW phone bank at Affirmations in Ferndale and a meet-and-greet at the ACLU offices in Detroit. She spoke about her work, of course, but it was when she listened that people really noticed.

“She spent a rather insignificant amount of time introducing herself, and the majority of the session was her listening intently to our stories,” said Emme Zanotti, vice chair of the Michigan Democratic Party’s LGBT&A Caucus. “[She listened to] Royal Oak stories, Detroit stories, stories of trans women, stories of Black women.”

Robinson was listening so intently that she didn’t want to leave the ACLU’s headquarters. “Her team had to drag her out of the room because she was 30 minutes from the airport and her flight was boarding in 20,” Zanotti went on, adding that it was obvious that where Robinson feels comfortable is “right in the mix with everyone doing the work on the ground. That ‘roll up the sleeves’ mentality is going to make waves.”

And Robinson comes with good credentials. At Planned Parenthood, Robinson said, “I’ve seen what it looks like when people who are committed to equality stand up and say enough.” Robinson said that HRC “is at the forefront of what it means to fight for dignity and respect for queer folks in every aspect of our lives,” including on the policy front.

“Let’s put policies into law that will enshrine our rights all over this country so we’re not dealing with this patchwork of protections people are living through,” she added. “The urgency is clear, but there are also unparalleled opportunities. I’m excited about what HRC has done so far, and I’m excited about the next chapter.”

Even before she landed at Planned Parenthood, Robinson was working for the cause. She got her start as a field organizer with President Obama’s reelection campaign. “She cut her teeth doing community organizing,” Zanotti said. “To me, that instantly signals where her priorities have been and will be – right here with the community.”

“I’m a community organizer every day of the week,” she told Pride Source. “I care about people, and I care about our stories. As challenging as this moment is, I’ve learned that the power of our people cannot be stopped.”

Equality Michigan Executive Director Erin Knott said that she looks forward to working with Robinson. In the meantime, Knott said the EM/HRC partnership has worked well so far, thanks in part to HRC Michigan State Director Amritha Venkataraman.

“Amritha and I agreed that with our combined power, we could enact real change,” said Knott. “Both organizations have brought their time, talent and treasure to [the] #HateWontWin coalition, and have worked tirelessly since June to advance our common goal of ensuring that LGBTQ+ voices get off the sidelines and turn OUT and vote this cycle.”

“At HRC, we know that our strength is in numbers,” she said in a coalition press release. “It’s vital that we partner with our allies — sharing our collective resources, knowledge and motivations — to get the vote out. … Equality Michigan and HRC both recognized that the stakes were high and that LGBTQ+ voices matter now more than ever.”

No matter what happens at the polls this week, the EQMI/HRC partnership will continue.

“Anti-LGBTQ+ attacks are not going to go away after election day,” Knott said. “Equality Michigan and HRC are committed to continuing our collaboration so that our shared values and priorities become a reality for all LGBTQ+ Michiganders, especially LGBTQ+ youth who have been the target of political attacks this cycle. Our unique, one-of-a-kind partnership is a proven model that other states must adopt in order to ensure that we are treated fairly and equally and that love trumps hate.”

Robinson echoed that thought in her final words to Pride Source. She said that “we are in a moment where we have a politically motivated minority of extremists who are wreaking havoc on our community. They’re attacking our kids, especially our trans kids. They’re fueling hate speech online, and they’re advancing these bills that have nothing to do with making our communities safer.”

Robinson said the attacks are “about tormenting the most marginalized community. More than half of Americans are voting on a ballot that has an election denier on it. It’s a moral crisis for our country.”

Despite that, Robinson said she sees cause for optimism, saying that we are at a turning point. “I believe there’s a lot of hopefulness. I believe … we’ll be able to make the kind of cultural strides that are needed to stamp out this kind of cruelty with a love and care that is really who we are as Americans.”