Dale Versus Goliath: How a Trans Auto Entrepreneur Took on the Big Three

It’s the early 1970s in the U.S. There is an energy crisis with long lines at gas pumps, fuel rationing and station owners posting signs declaring that they’re “bone dry.” All this at a time when Detroit-born-and-bred muscle cars like the Ford Mustang and Chevrolet Corvette were still kings of the streets.
But as the energy crisis wore on, people began looking for an alternative to the then-popular, gas-guzzling behemoths. Detroit automakers were faced with a demand for smaller cars, and that demand was being met by foreign cars like the Volkswagen Beetle.
Enter the Dale, a car with three wheels that promised 70 miles per gallon and a price tag of only $2,000. It seemed too good to be true. But was it? Or was the Dale exactly the right car at exactly the right time?
“When the Dale came on the scene the Big Three were all in their first generation of small cars,” says Adam Bernard, President of the Detroit Chapter of the Lambda Car Club.
He said cars like the Chevy Vega, Ford Pinto, and AMC Gremlin “were all going after the Beetle.”
While these cars were more fuel-efficient, they had their problems.
“The Pinto had safety issues, the Vega had corrosion issues, and the Gremlin was the heaviest, so not super fuel-efficient,” Bernard added.
Perhaps that’s why the Dale was so well-received when it was introduced to the public in 1974. People wanted something different, and the Dale was different, indeed. So, too, was the woman behind the Dale: Liz Carmichael. 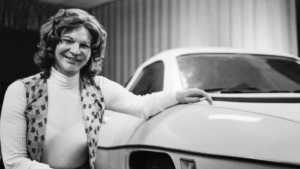 Taking on Goliath
A transgender woman, she started the Twentieth Century Motor Car Corporation. It was the car company that sought to make the Dale the David that would take on the Goliath that was Detroit.
“Liz Carmichael suggested that she could build a car that would set Detroit on its ear,” says Leslie Kendall, the chief historian at the Petersen Automotive Museum in Los Angeles. “that investors would flock to it, people would want to line up to buy one, and it would show Detroit a new way of building cars.”
And Carmichael was not shy about taking on Detroit. She declared that she was at war with the Big Three.
“I’m going to knock the hell out of Detroit,” Carmichael told the press.
She also said that she would “kick the shit out of” General Motors and claimed that “the Dale will be the biggest thing since Henry Ford invented the Model T.”
The saga of Carmichael and the Dale is the subject of a recent HBO documentary titled, “The Lady and the Dale.” It’s a film that spans the gamut of true crime, automotive history and gender identity.
The documentary makes extensive use of past recordings and media interviews to allow Carmichael, who died in 2004, to tell her own story. In it she declares, “We’re going to shock General Motors, Ford and the rest of them right out of their big overstuffed seats.”
These were fighting words, sure, but they were especially shocking coming from a woman in a male-dominated industry. But Carmichael certainly didn’t lack in self-confidence.
“I can do anything a man can do,” she said.
The Dale’s marketing materials reflected Carmichael’s bravado: “A startling, aerodynamic innovation in design, construction and efficiency that has, at last, brought the automobile into the space age. The most exciting idea that ever happened to personal transportation.”
Carmichael’s claims about the Dale often seemed far-fetched.
“My automobile will be the safest in the world,” she said. “I’ve driven one of the prototypes into a solid concrete wall at 30, 40 and 50 miles an hour and there was only superficial damage to the front. All that happened to me was that my face got scratched a little and I got a little bloody nose.”
She also claimed that the Dale was bulletproof and that she once drove it into the ocean.
These claims were not only fantastical but also unnecessary. Carmichael had some of the greatest minds in engineering and design working on the Dale. There was genuine enthusiasm about the car from the press and the public. Was Carmichael a teller of tall tales, or was she just a woman facing an uphill battle in an industry that didn’t want or accept her?
“Being a woman attempting to revolutionize a business industry in the ’70s … if you didn’t take that strong position no one was gonna give you credit,” Vivienne Ming, a tech entrepreneur interviewed in the documentary says. “It is her one chance to set all the past aside and do something truly meaningful. And no one, no one else in the world is going to give her this chance. She just has to create it for herself.” 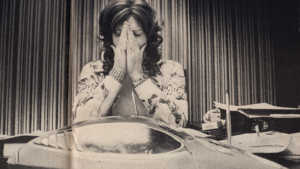 Past Problems
But the “past” that Ming referenced, well, that would ultimately catch up to her.
The HBO doc features Fox News host Tucker Carlson’s father, Dick Carlson, then a reporter from KABC who started digging into the Twentieth Century Motor Corporation. He found that not everything was as Carmichael claimed. One of the biggest problems was the sale of the car to the public through deposits. Ultimately, that got Carmichael in trouble with the U.S. Securities and Exchange Commission because of apparent misuse of funds.
Carmichael quickly went on the defensive, accusing the State of California of harassing her. She was also convinced that the Detroit automakers were out to sabotage her.
But it didn’t take long for more of Carmichael’s history to be revealed. She claimed to have a mechanical engineering degree from Ohio State University and a master’s in business from the University of Miami. But she didn’t have either, as Carlson uncovered. And then he broke the news that before transitioning, Carmichael was living as a man — a man, it turns out, who was on the run from the law.
Carson, like much of the media, seemed obsessed with Carmichael’s gender identity and insisted on misgendering her.
“Geraldine Elizabeth Carmichael is, in reality, is a 47-year-old guy by the name of Jerry Dean Michael,” Carson gleefully declared from behind the news desk.
In the documentary, Carlson recalls speaking to a sheriff at the jail holding Carmichael after her arrest.
“I asked him, ‘Where did you put this guy? Is he a male or a female? He’s been saying that he’s a female but, uh, does he have male equipment or female?’ And [the sheriff] said, ‘Oh no, he’s equipped just like you and I are,” the sheriff said. “He’s a male.’”
As if gender were as simple as that.
“It was all some version of what now gets called the evil deceivers and make-believers trope or stereotype and that we’re pretending to be something that we’re not and that it’s a deceitful act,” says trans historian Susan Stryker, interviewed in the documentary. “To be non-consensually outed, it has to be considered as a violation. Something was disclosed about them without their consent that is going to have really powerful negative consequences for them.”
Carlson, however, believed that Carmichael’s identity was all part of a grand, nefarious plan.
“Elizabeth Carmichael was a supreme egomaniac,” he says. “The fact she posed as a woman, it was a matter of disguising herself as a fugitive but also was a way for her to garner publicity. It was very effective.”
One could certainly argue that Carmichael was self-absorbed. In fact, she would tell you herself.
“I don’t give one hoot in hell about ecology or the public welfare or the public good,” she’d say. “I’m in business for only one reason: to make Liz Carmichael the most important person in the automotive industry.”
But using her gender identity as a publicity stunt? Hardly.
“Whenever a trans story surfaced, the media would take it and run with it in the simplest possible terms, which was a man masquerading as a woman,” said Sandy Stone, a gender and media theorist interviewed by the filmmakers. “Liz had to combat the narrative in the media that she was not a woman. How do you combat the media’s narrative that you are not a woman? And the answer is you don’t.” 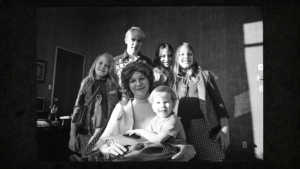 Elizabeth Carmichael poses with her family. Courtesy of HBO.

Truth Among Identity
Despite all of the fraud and law-breaking and lying of her past, Carmichael’s gender identity was one of her truths, as was her role as a parent. She loved her kids, and family was very important to her.
Candi Michael, Liz’s daughter, who is interviewed extensively in the film, says she and her siblings were “all fine” with Carmichael’s transition “because she was a great mom.”
That’s not to say Carmichael’s less-than-upstanding past hadn’t been hard on her family. But the Dale was supposed to change all that.
“I thought this would change our lives,” Candi Michael says. “There’d be no more sleeping in cars on the side of the road, no more getting up in the middle of the night to move to another town, no more high-speed car chases on public roads. I thought this was the beginning of a real life where we could be a normal family. Because this is real. But my secret self was wondering when it was going to end.”
And end it did. The family would end up on the run again, and the Dale would never become “the best car ever built.”
“[Carmichael] claimed that the only reason that this car didn’t live up to its promises, or wasn’t allowed to live up to its promises, was because Detroit was out to get her,” Kendall says. “She thought that Detroit had a vendetta for her; she thought that Detroit knew that the car was so much more vehicle for the money than anything they could possibly produce. And that turned out not really to be true.”
However, he says, “A lot of people believe that with sufficient development the car could have been a genuinely workable vehicle.”
But even once Carmichael was out of the way, the Big Three she was so concerned about didn’t end up stealing her idea for themselves after all. There has not been a mass-produced, three-wheel car, let alone one that can withstand brick walls and get 70 MPH.
In fact, as a country, we continue to fight over the issues of fuel efficiency, energy prices and gender identity. Was the Dale a fraud, or was the Dale an answer to a problem that has never gone away? The Dale certainly wasn’t a failure of imagination. But the very concept of the Dale, just like the very concept of a transgender woman at the helm of a major auto company, raised a lot of questions Americans just weren’t ready to consider about who we are as a country. Are we not a country of proud macho men guzzling gas and kicking ass? The idea of gender fluid people tooling around in space-age, fuel-efficient vehicles is a threat to that image. It’s a battle we’re still having, and as long as we cling to the past, we’ll continue to lose.