Danielle Eve, Dead at 61, Captured Spirit and Joy of Michigan LGBTQ+ Nightlife Through Her Photography

Eve took photos for various LGBTQ+ publications for over 25 years

She helped us see ourselves in a better light. Danielle Eve, who photographed southeast Michigan’s queer nightlife for over 25 years, succumbed to a brief battle with cancer and died Sept. 19. She was 61.

Eve did not like to focus on the past and rarely talked about her childhood and, according to friends, had a strained relationship with her family. In a 2021 interview with the Stay Fabulous show on Facebook, she said to host Jacqueline Frost only that her family “never really accepted much of Danielle.” Like many in the LGBTQ+ community, she built a family of her own, comprised of close friends and complemented by the droves of people she knew from the clubs. It is through their eyes that Pride Source reflects on Eve and her work.

What is known about Eve’s origins is that she was born in Detroit on Feb. 25, 1961 and was of Guatemalan and Mexican heritage. She grew up on the city’s east side. Her interest in photography developed in the late ’80s when a friend passed by and gave her a camera. “It was a terrible time,” Eve confessed to Frost. “My house had been broken into and a lot of things were taken. I was feeling pretty down.” The camera helped instantly, as Eve quickly taught herself how to use it by reading technical books and with lots of practice. Soon, she started venturing out to nightclubs, camera in hand.

“I started taking pics, and it just grew and grew,” she said on Stay Fabulous. “Then, when I started coming out to the bars, I just started talking to people and they said it was OK to take pics.”

By day, Eve ran the photo lab in the Roseville Meijer for many years. At the store, Eve initially presented as a male while working. In later years, she worked as her authentic self. Through the years, she encountered a lot of transphobia while working at Meijer from fellow employees, management and, sometimes, customers.

At night, Eve began taking photos in LGBTQ+ clubs across metro Detroit. Her first gig was for Cruise magazine, the premier bar rag in the city. Tony Rome had started publishing Cruise in 1979. When he learned that Eve would be presenting as female when taking pictures for the magazine, he was not pleased.

“[He] told me, ‘We don’t see many of your kind around,’” Eve recalled on the Stay Fabulous show. “Trans girls didn’t have a name back then. Well, they called us all kinds of names.”

Despite admitting that she was overqualified, Rome almost fired her shortly after she started taking photos for his magazine. “I was taking them as Danielle, and he didn’t like that. [The magazine] wanted me to stop or they were going to fire me.”

But by then, Eve’s popularity was already rising, and she proudly remembered what happened next while on the show.

“The bars got behind me and they said, ‘We like Danielle. You can’t do that. You’re a gay magazine.’”

Rome relented and the subject was never brought up again.

Through the years, Eve worked for virtually every queer Michigan publication in existence. In addition to Cruise she worked for Hott, Flame, OutPost and for Pride Source Media’s print publication, Between The Lines, where she took photos for a regular bar column for nearly a decade. “Between The Lines was great … [former publishers] Jan [Stevenson] and Susan [Horowitz]. … I did like working with a newspaper because I got to write a little bit, too.”

Her longest running gig, however, was taking photos for Metra magazine. She shot for the magazine for a quarter of a century. Mary Sappington, aka Mary Metra, told Pride Source that Eve was the best photographer Metra had had in its 40-year history. “She was an example of excellence and inspiration to so many people here in the Detroit LGBTQ+ community,” Sappington said in an additional statement.

Back at Meijer, she was befriended by another store associate, Jamie Crystal Taperek. Taperek heard that Eve had been harassed while getting gas after leaving a nightclub one night and offered to hang out with her on weekends so she wouldn’t have to be alone.

Taperek said that offering to go out with Eve was “one of the best decisions. I never told her, but my home life wasn’t great, and getting out of the house once a week was everything I looked forward to.”

To this day, 20 years after they first met, Taperek said she looks back on the times spent with Eve with great joy.

“She introduced me to so many great people in the most welcoming, happy, accepting environments,” said Taperek. “It was amazing. Honestly. People were so warm and welcoming when she walked in. Everyone was so happy to see her and have their picture taken.”

McKee became fast friends with Eve and the two would often go out to eat.

“Her favorite food was Mexican,” he said. “She could eat like a horse, and she was always getting me and other friends to go down to Mexican Village.”

In addition to nightlife, Eve also took photos of other queer events, such as Prides, the Performers Awards of Detroit (PAD) ceremonies, the annual Metra picnic and other cultural events that interested her. She would oftentimes take promo pics of Detroit entertainers for free if they couldn’t afford to pay. She volunteered her time and talent for various fundraisers and many groups, including TG Detroit, whose TransFusion 2022 gala she attended in July. In addition, she also took photos of landscapes for a time and, more recently, liked to photograph flowers.

In August, Eve learned she had cancer. The disease ravaged her body quickly and she died approximately six weeks after being diagnosed. Though she is gone, friends say her legacy will live on.

“I believe she knew she was a staple in the community, even though she was super humble about it,” said Taperek. “It was something that made her connect people and be connected all at once.”

Though a great deal of her early photos and negatives — from the old days before digital photography — were destroyed by a flood many years ago, her digital files are with her close friend deorbiter, who is cataloging and preserving the images.

“Her legacy is her body of work,” said fellow photographer Antonio Cassone.  “I wish PAD was still around or some organization [that] would have showcased her work and rewarded her. [It’s] such a big loss, really.”

Patrick Burton was the creative director and curator of the massive Mighty Real/Queer Detroit art exhibition that took place in June. He selected six of Eve’s photos to be a part of the exhibition. Three hung at Hatch Art in Hamtramck and the other three at Norwest Gallery on the northwest side of Detroit. 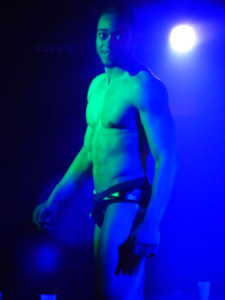 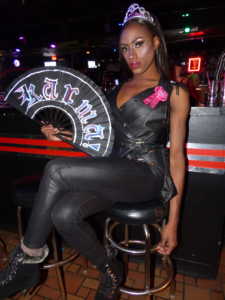 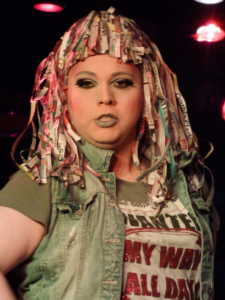 “Danielle Eve was a Detroit icon, a dedicated public servant and pillar of our community,” he said. “She chronicled Detroit’s queer nightlife through her photography. Her images will be long remembered for capturing the spirit and joy of local LGBTQ+ folk.”

Burton said there’s talk that an exhibition of Eve’s work will take place in the near future. Burton, himself, knew Eve for over 25 years. “Our paths crossed often and, obviously, she was liked by everyone. She was so warm. She really captured a loving spirit of Detroiters. There’s a real beauty in her work.”

In her artist statement for the Mighty Real exhibition, Eve described what she did in her own words. “I love noticing the unique and the common, often finding similarities between all people,” she said. “If I can help a person see how beautiful they are, give them a smile, then I’ve done my job.”

Eve’s family has announced that, per her wishes, she will be cremated and there will be no funeral. Friends are planning a remembrance service for Eve at Adam’s Apple, one of her favorite spots, on Sunday, Oct. 9 at 4 p.m. Adam’s Apple is located at 18931 West Warren Ave. in Detroit. The event is being planned as a fundraiser for a yet unannounced cause. A collection of Eve’s works will be on display.