Cpl. Dani Woods and the newly formed Detroit Police Department LGBTQ Community Council have ambitious goals. Yet the council has already succeeded in convening, organizing and planning throughout the pandemic, not to mention a summer of Black Lives Matter protests. And its first concrete goal is set to be accomplished Tuesday, Jan 26, at 6 p.m. when the council will host a virtual LGBT Community Convo.

“We want to hear from the community,” said Woods, the Detroit Police Department’s LGBTQ liaison since 2013. “So the idea came up that we introduce ourselves to the community, let them know who we are, what we’re about and what we’re doing. And also to take in whatever issues or concerns or even ideas that they have so that we can better build our relationship.”

A group of law enforcement officers, community activists and mental health professionals, representing “heavy hitters, go-getters and change agents,” the council is starting fresh, after an earlier LGBT Advisory Board was dissolved a few years ago.

Woods and LGBTQ activist Nicole Denson are co-founders of the council. They’ve collaborated on community projects before.

“We just wanted … a different approach to community, because the relationship has flourished since being the liaison — since I’ve been in my position. And we’ve been able to really work together — law enforcement and community, specifically in Detroit,” Woods said. “And so we want to ensure that we keep not just the conversation going but really put forth the actions and create that change.”

One of those actions includes identifying LGBTQ advocates within, or available to, the DPD.

“We know that social workers [and] victim advocates, they have our … best interests in mind, but our community sometimes has a different or special kind of need and everyone is not trained or aware of those needs,” Woods explained. “And so we want to make sure we have people in place that are readily available, educated and understanding on our issues and what it is that best works for us, as LGBTQ members.”

Another line item on the council’s list is the accurate collection of data. Woods explained what that means in terms of the LGBTQ community. For one thing, she said, sometimes in reporting people are misgendered. For another, an accurate account of the community can result in locating grants or other funds available for LGBTQ people.

“With accurate data, we’ll be able to service our community members and also have hard numbers to combat certain crimes,” Woods said. “You know, whether it’s happening communally or against trans women of color or within domestic relationships, we just want to be able to properly pinpoint the data that happens to our community.”

Woods further explained why that accuracy is especially critical at a time when crimes against the LGBTQ community are often mischaracterized or misunderstood.

The key is ensuring that resources are available to people who need them.

“And if there is a shelter or any kind of counseling or support group, we want to be able to say, ‘Hey, here are the numbers, so this is why we need this.’ That’s an example of why we need hard numbers,” she said.

The council would also like to see an LGBTQ liaison in each precinct.

“I think the community is very familiar with me, and it’s not to say I’m stepping away or I won’t be around,” Woods said. “However, this just gives the community another reach, another resource and another face, because the department is very supportive of what we’re doing. But I want this community to see more than just me. And this helps us to better, once again, get hard numbers and follow up even more and give that personal attention to community members because I can only do so much.”

According to Woods, Chief of Police James Craig has been supportive of every one of their proposed initiatives thus far. Woods’ first identified co-liaison, 25-year veteran Police Officer Angelica Robinson, joined the phone interview conducted for this story.

“I’m a strong believer of the community as well as part of the community,” Robinson said. “But I also believe in fairness, equality, everything across the board and being able to help out in any way I can in regards to building that rapport and trust back with the police department.” 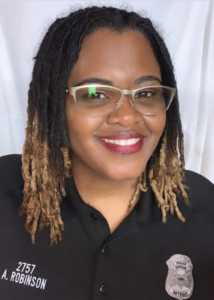 Building trust between law enforcement and the community is key, something that the BLM protests over the summer brought into painfully sharp focus. Woods spoke on what those events have to do with the goals of the council.

“Some of our own community members were in those protests,” Woods acknowledged. “And it’s definitely understood why. It’s about the how and the what; the when is yesterday. So, we need it now: certain services, certain resources. And what can we do as public servants or as community to make that happen?”

These issues loom large over police departments across the nation, but Woods offered assurance that she has a track record for being proactive and a problem-solver. She’s not a fan of talking “til we’re blue in the face,” she said.

“We have a habit of that, talking about issues in our own silos, but when it comes to putting forth the effort to make it happen, that’s kind of where the buck stops. And it’s like, ‘Hey, where did everybody go?’” Woods said. “And so we have a nice council set up … just ready to make all of these things happen. I couldn’t be happier working with these folks.”

The Jan. 26 Community Convo will be just that: a conversation, not a panel speaking at the audience, Woods said. After council members introduce themselves and discuss their various projects, the floor will open to the public. Woods said they’re earnest in seeking community input and inquiries on how individuals can help, adding that that’s the type of energy the council needs.

“It’s understood that not everyone’s in favor of the police or want to work with the police,” Woods said. “However, if we can meet each other halfway — because you don’t have to like me to work with me. You don’t have to like me to push for common cause. If we both have a certain kind of skillset to help us get to that, then we really need to put our differences aside, because it’s not about us in this moment. It’s about getting to that point. And that’s what we want the community to know.”

Woods said the police department’s relationship with the LGBTQ community has come a long way since she was established liaison in 2013. She compared it to building a bridge. Yet there is work to be done.

“I always let people know, we’re not claiming perfection,” Woods said. “So perfection we are not, but we are continuously working to build a mutual relationship, not just one-sided. We want to sit in the good graces of our community members, but we also want them to have trust in us, too.”

Learn more about the event and join in on its Facebook page.