Detroit Shines As the Real Star Of ‘Bargain Block’ Season 2

From the first note, there’s no doubt about it: HGTV’s “Bargain Block,” which premiered last night, is Detroit, through and through.
The show starts with a montage featuring MotorCity Casino, Hart Plaza and other Motown landmarks over a driving, soulful beat. That’s because this season, D-Town, itself, will play a significant role in the show, especially the city’s Northwest side.
The two leads, of course, are the adorable self-proclaimed “partners in life and business” Keith Bynum and Evan Thomas, two obviously ambitious (and keenly talented) men who moved to Detroit sight unseen five years ago and began renovating and rehabbing some of the most torn down, run down — and, surprisingly often, burnt down — houses in the city.
Recently, Bynum told Pride Source that viewers responded to what they saw of Detroit in Season 1 and asked to see more. So it was natural to the show’s evolution that the unique city they work in be featured more heavily. Bynum said that this season, he wants to “showcase all of the cool things about the city that people outside of Detroit maybe didn’t know about, especially in relation to how we run our business.”
In the Season 2 premiere, Bynum and Thomas immediately get to work on a 3-bedroom, 1-bathroom bungalow with a failing roof that’s caused significant water damage. They’re dealing with disintegrated plaster and hole-ridden floors. Just their style! And still, not enough of a challenge for the dynamic duo. So what they do? They end up buying a similar house next door and fixing up both at the same time. Like we said: ambitious. 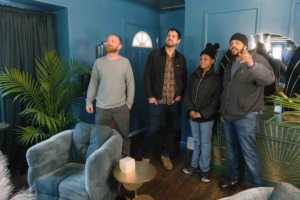 Bynum and Thomas, who could not be any cuter with their matching haircuts, charmingly bicker over budgets, layouts and just about everything else. It’s easy to see how much they love each other and how remarkably well they work together.
In short order, the couple transforms the two houses. The first goes from bleak to “breezy bougie Hamptons beach house” with a “beach luxury” vibe. Yes, Bynum is responsible for the theme of each house. He was criticized on the HGTV special series “Rock the Block” for designing a little too buyer-specific and limiting his properties’ mass appeal. But that didn’t stop the innovator from naming the second property the “Great Gatsby House,” featuring 1920s art deco as his style inspiration.
Bynum isn’t afraid of bold choices, and he made his share of them with this house. Clearly he knows his stuff, because everyone at the open house loved it, including an adorable little toddler named Matilda, who lives next door. Neighbors often pass by to visit and see the improvements happening in their ‘hood up close and personal.
And we’d be remiss if we forgot to mention Bynum’s and Thomas’ partner-in-crime Shea Whitfield, a talented Detroit-based real estate agent who helps the pair find houses to buy and then sells them once they’re completed.
If the premiere of Season 2 is an indication of what’s to come, it’s going to be a season full of miraculous transformations and a Detroit lovefest deliciously overseen by, dare we say, the handsomest home flippers in the biz. Now, that’s a bargain!