Drag performers are used to being center stage. What showgirl doesn’t love a spotlight? Unfortunately, in 2022 drag performers nationwide were in a spotlight not of their choosing and for all the wrong reasons.

Drag performers have become visible targets in a culture war waged by people who believe that there are only two genders and that masculinity and femininity are strictly defined. They’ve lobbed accusations of pedophilia against LGBTQ+ people at large, but with a particular ire directed at transgender people. Because drag performers are proud cultural icons, they are receiving a lot of negative attention from right-wing gender truthers.

According to a report from GLAAD, there were “141 incidents in 2022 of anti-LGBTQ+ protests and threats targeting specific drag events, including during Pride festivities and false rhetoric against performers deployed in campaign ads for the midterm elections. The analysis shows increasingly violent rhetoric and incidents as the year progressed, including armed white supremacists demonstrating in Texas and the firebombing of a Tulsa donut shop that had hosted a drag event in October.”

In 2023 we’ve already seen legislative sessions in states like Arizona and Arkansas kick off with bills to curtail drag shows. Republicans in Michigan tried that nonsense in 2022, but Michigan’s new Democratic majority means that anti-LGBTQ+ bills won’t be getting traction any time soon.

In the face of being the right’s favorite political football of late, how is Michigan’s drag community coping?

Well, for many, despite threats, the show must go on.

“Our entertainers are not scared to face it,” says Brad Haas, co-owner of Beauty Beyond Drag Productions in Grand Rapids. “I’ve had some people who say, ‘Yes put me in this show because I am a social justice warrior and I want to show that kid out there that it’s okay to be different.’”

Haas has already had to respond to safety concerns for his performers. In 2022, Beauty Beyond Drag did Allegan’s first ever Pride, which kicked off with drag queen story time.

Online commentators called Haas and his performers “disgusting” and “pedophiles” and they learned that the event was being discussed online by the white supremacist Proud Boys.

“We had to hire paid security because we were worried for our performers’ lives and safety,” Haas says.

Haas’s co-owner Sue Haas, who is also his mother, makes it clear that the conservative right’s claims that drag is dangerous for children is false. “I believe that the right-wing Republicans are over-sexualizing drag in general,” she says, adding that Beyond Beauty does age-appropriate programming for all kinds of audiences “and we appropriately set the tone for those shows.”

She prefers to focus on the positive aspects of drag, not “all this loud-mouthed overbearing political crap that you hear.”

“It’s not our mission to stir up trouble,” she says. “We’re into it for the art of drag.”

Drag performer Jadein Black, who leads troupe Boylesque Michigan, had a run-in with the Proud Boys during an outdoor drag queen story time sponsored by Ann Arbor Public Library. “I didn’t know who they were,” she tells Pride Source as she gets ready for that night’s gig doing drag bingo. “I just saw them carrying flags until I started reading books.”

That’s when they started shouting Bible verses through a megaphone.

“The police were called and [the Proud Boys] were told that they didn’t have a noise permit like I did, so they were kind of irritated,” Black recalls. The protesters eventually left. 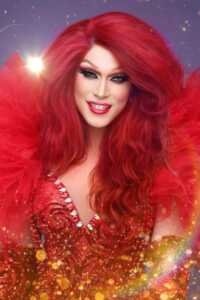 While she acknowledges that “not all drag is appropriate for children,” she has no patience for those who want to demonize all drag. “People who don’t agree or don’t understand or don’t want to understand, they’re never going to understand,” she says. “So if I give them the time of day or accept the hatred they give, then they win.”

Black says that if those protesting drag shows were really so worried about kids they would advocate for better education policies in Michigan like repealing the third grade reading law, paying student teachers and increasing teacher pay.

Of course, the protesters aren’t showing up to advocate for children. They are there to push a right-wing agenda focused on silencing and erasing LGBTQ+ people. “At first, they say it’s inappropriate for kids and next, they’re going to say it’s not welcome in my community,” Black says.

“There are so many people who are afraid to use their voice,” Black says. She is not one of them. “I’m going to live my life the way I live it no matter what.”

“I deal with multiple threats, multiple incidents of hate speech every single day that I open up my social media,” she says. “But I’ll take the punches for my community because I’m blessed enough to have this platform.”

Madison received so many death threats before a drag story time as part of Queer the Block in Kalamazoo that she almost canceled. “But the night before I said, ‘You know what, I have never been scared. There is no way that I’m going to let these haters, these bigots, win.’ And I went out there and they just made sure there was a lot of security.”

Madison is the owner and creator of The Kunty Kittens, a troupe of seven drag queens who specialize in girl group numbers. The group began in 2016. When asked if the name “Kunty Kittens” was in response to Trump she says, “Just doing drag is a response to Trump. It’s just a protest every single day.”

She thinks the negative focus on drag performers is ridiculous. “There are so many issues in the world. We’ve got people going hungry, we’ve got homeless people,” she says, “and someone’s worried that I’m in a pair of sparkly boots dancing to a Britney Spears song to make a living.”

But it’s more than just sparkly boots to Madison. “I’ve always been a person who does drag with purpose,” she says. Madison understands that drag is also a beacon for those searching for their place in this world and trying to be their authentic selves. “I try to be almost like a mama in the community for people who need someone to look up to,” she says. “If I can save one young queer life, one young trans life, I’ll do this until I’m 100 years old.”

She hopes that young people see her and think, “That bitch is 45 and has been through it and is still up there smiling and representing and doing the best job she can do.”

Madison is a regular host of drag queen bingo at Five 15 in Royal Oak along with beloved drag queen Sabin. She said that so far they have never had protesters in Royal Oak, adding that it’s a fairly progressive city with an incredibly supportive mayor.

Madison points out that drag is political, but it’s also a livelihood.

That said, there are more people supporting drag performers than people against them. Madison says that more and more audience members are expressing concern for her safety at events. “To see patrons doing that is probably the most heartwarming thing ever.”

Bottom line — drag isn’t going anywhere, and the shows will go on.

“No matter what, as much as you try to bring down the LGBTQ+ community, we’re just stronger than ever,” Madison says. “We’re always going to shine. We’re never going to let hate win.”