Home is where the heart is, but sadly too many people are heartless when it comes to those who are homeless. Especially when those people are trans women of color.
Ten years ago when Kayla Gore experienced homelessness and needed emergency shelter, “there was nothing out there for me,” she tells Pride Source.
She slept in parks. She did not feel safe or secure. 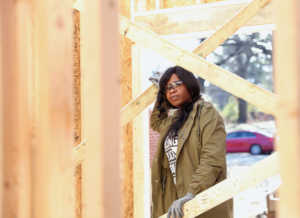 Today, Gore works to combat homelessness for transgender women of color in her hometown of Memphis. Gore is a co-founder of My Sistah’s House, an organization that provides emergency housing, support, meals and other resources to people experiencing homelessness. Her story is one of six featured in the anthology doc series “IMPACT with Gal Gadot,” premiering April 26 on National Geographic’s YouTube channel.
The series highlights the stories of women around the world who are working to better their communities, like Kameryn Everett, a figure skater who coaches and empowers young Black girls in Detroit, and Arianna Font Martin, who set out to get clean drinking water to people in Puerto Rico after 2017’s devastating hurricane.
Gadot, who is famously this generation’s onscreen Wonder Woman, refers to Gore and the other women she highlights in the series as her “Women of Wonder,” as she called them during the virtual winter Television Critics Association press tour recently.
Gadot tells Pride Source exclusively: “Home is a place where you can find safety and shelter. Kayla knows too well what it’s like to feel unsafe. As a Black trans woman she has grown up in a world that cast her out for simply being who she is. But she’s determined to live her truth with dignity and impact others like her by creating the safety and shelter of the home that everyone of us deserves.” 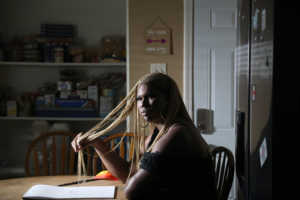 After years of being homeless, Angelica has found a safe place to stay at My Sistah’s House, a TLGBQ+ emergency shelter that Kayla Gore co-founded. Photo: Entertainment One/Ariel J. Cobbert

According to “IMPACT,” homelessness in the trans population is three times higher than the general population. In a 2015 survey, the National Center for Transgender Equality reported that 34 percent of transgender people in Michigan had experienced homelessness and 35 percent “avoided staying in a shelter because they feared being mistreated as a transgender person.”
While some cities have shelter beds set aside for transgender people, Memphis is not one of them. In fact, admittance to a shelter is often based on biological sex, which leaves transgender people with few options. “So most trans people choose not to use the services of shelters here in Memphis,” Gore says in “IMPACT.”

My Sistah’s House grew out of a need for options for the trans women of color who would come seeking emergency shelter at the LGBTQ community center OUTMemphis where Gore was working.
According to Gore, there were only a couple of organizations that allowed trans women, but those places were always full with a waiting list.
Gore ended up opening her own house to those in need, even though it was against the community center’s policy. It was “very grass roots,” Gore tells Pride Source. “Very word of mouth.”
Eventually Gore and others got the opportunity to buy a house that could shelter multiple people. But there was still a great need for permanence. “What we realized in our journey with My Sistah’s House was that when we became homeowners we had a lot more autonomy over how we governed our space,” Gore says on “IMPACT.” “So we wanted to pass that blessing on to the individuals in our membership, which is home ownership in the form of a tiny house.”
So in June of 2020, Gore started a GoFundMe with the goal of building 20 tiny houses to give trans women of color a safe place to call their own. 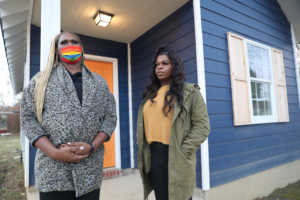 Why tiny houses? Cost, says Gore. Tiny houses are more economical to build, which means My Sistah’s House can afford to build more homes in order to help more people.
“We want to be able to help people plan ahead,” says Gore. “These homes will allow people to plan for five years or plan for 10 years. People can go back to school, people can actually live a full life thriving versus only being able to plan for a week or a month in advance.”
In other words, giving someone a home is giving them a future.
The biggest challenge My Sistah’s House faces is, not surprisingly, resources. Demand for MSH’s services have only gone up during the pandemic. “For the need to be so great, and for the resources to not be as great, that’s always an issue for us,” Gore says.
“My life experiences make me want to make sure that trans women don’t have to endure what I endured,” Gore says, tearing up as the cameras roll on “IMPACT.” “If there’s one thing I’d like people to know about trans folks is that we’re human, that we have feelings, and that we’re worthy. Everything that we’re asking for or everything that we’re entitled to, we are worthy of it.”