Since early 2020, the Fair and Equal Michigan coalition has continued to push to amend Michigan’s Elliott-Larsen Civil Rights Act to include protections for sexual orientation and gender identity. In 2021, the group is continuing its efforts. And despite some roadblocks due to COVID-19 and controversy among LGBTQ leaders who are concerned about putting LGBTQ rights to a vote, enough signatures have been collected to be evaluated by the Secretary of State. If accepted, the language will be decided upon by the state legislature and potentially appear on the 2022 ballot for a final say by the people of Michigan.

With his colleagues, Fair and Equal Michigan Co-Chair Trevor Thomas updated the public on the campaign’s current standing via a Zoom meeting last month.

“One, we know that it is a priority for [the Secretary of State] to certify the election that just happened, and now, two, they have made comments of a first-come, first-served process,” Thomas said. “There was another group of citizens working to change a law separate from Fair and Equal on another topic. They turned in signatures just before us, so we imagine that the Bureau of Elections will work on evaluating those signatures in the coming one to two months and then Fair and Equal’s signatures will be evaluated.”

If adopted, the ballot language would resolve a Michigan LGBTQ civil rights issue that has been raging for nearly since the 1980s. Thomas said that despite the risks of the petition being denied by the public or reworded unfavorably by conservative members of the legislature before being put on the ballot, now is the best time for the ballot measure to be introduced. He cited the progressive gubernatorial administration that would veto “harmful legislation” as a reason, positive overall public opinion for the LGBTQ community, a necessity for only two Republican votes in both the House and the Senate and petition language crafted to both appeal to conservative voters and simultaneously protect LGBTQ rights.

“We believe that the language we put forward is the best good public policy for Michigan. Yes, it added sexual orientation and gender identity and expression as the definition of sex, but we also provided an additional definition to religion, one that protects [the] religious beliefs of an individual,” Thomas said. “We did this to be crystal clear that everyone is at the table together. Religion is a protected class and we’re trying to do the right thing.”

Josh Hovey is the Fair and Equal Michigan campaign’s communications lead. He outlined the strategy of the campaign, stating that phase one was vote collection and now phase two has begun, which includes public outreach to educate voters on the importance of this issue.

“Our goal is to drive a highly tactical grassroots push of the LGBT community and its allies, including the nonprofit resource centers’ individual leaders within the community and national organizations,” he said, addressing the Zoom audience. “And you’re going to be identifying and activating individuals to take that targeted push during that legislative window that we have to pass this initiative. We’ll be providing coaching to make sure you’re as effective as possible and that you have all the tools you need to take our communications and deliver them to our respective lawmakers. A high-energy, boots-on-the-ground approach is going to be critical, and it’s going to emphasize direct personal conversations that help tell you your story and discreet action steps that are achievable by individuals with your very limited time.”

The legislative window for the ballot runs through the middle of 2021’s third quarter. 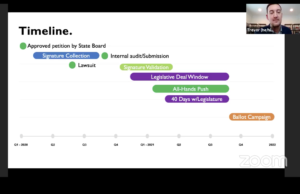 He added that there is a phase three in the planning process as well that will be formally introduced to voters this month. Another Fair and Equal Co-Chair is Jey’Nce Poindexter, an LGBTQ activist who described the campaign as a “well-oiled machine” when she addressed the crowd.

Learn more about the campaign online at fairandequalmichigan.com.