Lynn Keiser’s transition from male to female in her job at Ford Motor Company could’ve been a nightmare. After grappling with gender confusion and its toll on her mental health for close to two decades, she was unsure what life as a trans woman in the professional workplace would resemble.
Since making the public transition to female at Ford in 2016, Keiser has nothing but positive things to say about the company. She credits the smooth transition in part to Ford’s HR and management team who were willing to go the extra mile to make her feel comfortable.
“I think the transition has helped my career in a number of ways — I was happy right away,” Keiser said. “I’ve never talked so much in my life since transitioning. I have an internal peace and confidence.”
From the perspective of her fellow co-workers, it took merely a day for Keiser to shed her male clothing and present as female in the office, but the road to self-acceptance wasn’t as black and white as it appeared.
“In 1995 I met my husband-to-be.” she said. “I came off as a gay man even though I was a little confused. I tried to live as a gay man in the ’90s in New Jersey.”
It took another 15 years before she fully understood who she was meant to be. The revelation came in 2010 when Keiser was watching a movie and caught herself thinking how she wanted to look like the beautiful actress who appeared on screen.
“I explored a little bit,” she said. “I tried wearing women’s jewelry, then eventually women’s clothing. I joined a trans support group, and came to the realization that I’m a trans woman.”
However, coming out to herself and to a professional employer were two different stories. Keiser first attempted to transition in the workplace at a start-up in California, but could sense hesitation from her manager.
“I approached my employer about the transition, and they knew they’d have to accommodate me according to California laws,” Keiser said. “But I could see they were uncomfortable. It was a small family business, and I left.”
That’s when she discovered Ford.
“After another year or so of letting things settle down I broached the subject of transitioning,” she said. “I found a job at Ford listed online and applied there. While looking at Ford I was thinking about whether I could transition, and I found they scored a perfect 100 on the Human Rights Campaign’s Corporate Equality Index. That was very encouraging.”
It took close to six months after Keiser started her role at Ford to confront management about transitioning. In the early months, she said she would find herself crying in her car or crying herself to sleep out of desperation to transition.
“I was nervous of how it would affect my career, but I had to do it,” she said. “I had severe anxiety, and I was becoming dysfunctional personally.”
The first person she told at Ford was her supervisor. “His initial response was, ‘This isn’t the first time I’ve dealt with this,'” Keiser said. “He didn’t bat an eye. He said, ‘I hired you for your ability. I don’t care how you look.'”
Ford’s HR manager was equally supportive, even if he wasn’t sure how exactly to move forward with Keiser’s request. Keiser said the two of them investigated the matter together, talking with people who dealt with transitioning on the job as well as members of Ford GLOBE, a resource group for LGBTQ employees.
After announcing the transition to her fellow coworkers at an all-staff meeting, Keiser and her manager chose Feb. 29, 2016 as the first day she would officially present as Lynn in the office.
“I was extremely nervous, and wasn’t sure how people would react,” Keiser said. “It’s one thing to hear something verbally, but to see someone looking different, I knew it would be kind of disconcerting.”
“It was a little stressful at first — I felt awkward,” she continued. “I got strange looks, sheepish smiles … I call it ‘The Look.’ I get it in new places, at conferences and professional events. I can see people looking and trying to figure out how to react.” 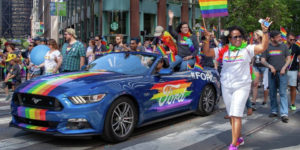 Ford research engineer Lynn Keiser (seated, waving) helped organize Ford’s participation in the San Francisco Pride Parade, which she watched from the back seat of a Ford Mustang convertible customized for the occasion.

But walking through her fear was ultimately worth it, Keiser said, as she’s witnessed her co-workers become more comfortable with time. To get over the confused looks and smiles, Keiser said she makes an even greater effort to get to know her coworkers.
“People can get used to almost anything,” she said.
And, if anything, Keiser believes the transition has improved her career and professional relationships. Her unique situation makes her stand out in a crowd, making it easier for her to network at professional events. And her newfound confidence certainly doesn’t hurt, either.
“I like myself better, and a happy person attracts people,” she said.
Keiser is using her experience to help other transgender employees navigate the workplace. Since coming out, she said she’s received several inquiries from other Ford employees looking to do the same.
Keiser has several pieces of advice for transgender employees who might not be fully out yet. The first is perhaps the most important: prioritize safety above all.
“It’s not safe to transition and make it widely known in some locations,” she said. “Don’t transition if you’re going into extreme hardship or are in physical danger of being abused.”
Secondly, Keiser encourages trans individuals to focus on career goals.
“Lots of trans people are without the chance to be educated,” she said. “If you do get educated it’s hard to get a job, and even harder if you don’t have the education or some experience. Concentrate on your career and education, and make the arrangements to build a career.”
However, despite the potential struggle and many of the tragic stories seen in the news or on TV, Keiser wants her community to understand that there are still many companies that will go out of their way to support trans employees. In a 2016 article in the Advocate, she wrote this advice:
“Don’t believe the horror stories. We all see the drama-filled stories on television, but we have to remember those shows aren’t ‘real’ reality,” Keiser said. “It won’t always be roses, but there are great companies that want great employees working for them, and having the support of your employer while transitioning can be an amazing experience.”