‘God, He’s Been Good’: A Chat With ‘The Voice’ Semi-Finalist Davon Fleming Before His Hotter Than July Gig

Davon Fleming is a vocal force to be reckoned with.

Since becoming a semi-finalist on season 13 of “The Voice,” Fleming has been touring as a backing vocalist with his “Voice” coach, Jennifer Hudson. He has also released a Christmas single and, earlier this year, the touching ballad “Reach Your Heart.” Fleming is currently working on an EP in his limited free time.

The singer spoke to Pride Source while driving back home to Baltimore from a show date in Greenville, South Carolina.

Tell me about your beginnings. You were a church boy?

I loved being a church boy. I grew up in the church. I started singing at the age of 3. It’s definitely where I got my foundation in singing. Watching my mom sing, it touched me in a way that was really remarkable. And when I first sang in church, I knew that’s what I wanted to do. I was giving something to [the congregation] at that time. I didn’t know what it was. But I was just enjoying people enjoying my singing.

Did you have issues coming out, given your religious upbringing?

I’ve never really had to come out. My story was not that dramatic. Growing up, my family always knew what it was. I didn’t know what to call it, but I was comfortable in my own skin. I didn’t have a horrible story of my family treating me as an outcast. Thank God we loved each other enough, and we were strong enough in our relationship and our values to keep our relationship going, and that was never an issue.

How would you describe your singing style?

My music is about healing and operating in the spirit of love, and if we Christians say that God is love, then we have to love everybody. It doesn’t gear toward one crowd. I can perform in front of any crowd. I am someone who embraces everybody, and I think that’s why people gravitate toward me cause before I open my mouth, I’m likable. The same thing that I’m doing at church, I can do down the street at the jazz festival and still get the same response. 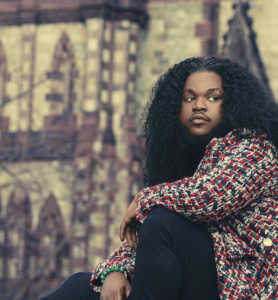 Talk to me about your journey to “The Voice.” What were you doing, say, between high school and being cast on the show?

I went on BET’s “Sunday Best.” I was a contestant on that show. I was always singing. I was always participating in music. For years, I always thought I was going to be a gospel singer up until I did The Voice. I always wanted to do all kinds of music, but I had literally just come back from a tour of Italy, and they just happened to be doing auditions in Baltimore, where I’m from. So I was just like, “I’m going to go. With no expectations.” By that time, I had already sung with the who’s who of gospel music.

On the show, you picked Team Jennifer…

We’re similar in so many ways. Of course, we are both powerhouse singers. But I wanted that kind of experience from someone who has lived it and been through it. Jennifer (Hudson) has done a TV show and been told no. I’ve faced a lot of adversity. I’ve been told no. And for someone who has gone through the same thing and been told no and still made it, I can trust your word and I know, vocally, you’re going to keep me here up until you can’t because you’re a person who appreciates true voices.

Tell me a bit about your experience on the show.

I charted number one every week. I am the only contestant from the show to have charted three different categories in one season: Christian, pop and soul. I ended as a semi-finalist. I got the chance to perform with a lot of people after that: Jesse J, Kim Burrell, we did a performance with John Legend, Chrisette Michele, Kirk Franklin, Mary Mary, the cast of “Pitch Perfect”… and I really benefited. I’ve gone to London, Germany, Switzerland. God, he’s been good. I’ve done a Target commercial, a Toyota commercial, the Stellar Awards and Access Hollywood.

And you continue to work with Jennifer to this day?

It’s been amazing because the same person we see on TV is the same person she is in real life. She’s genuine. She’s humble. She’s not big enough to not tell me how great I am. And she really didn’t have to use me after the show, but she continued that relationship, and for that, I’ll always be grateful.

You sang a lot of big ballads on the show, songs by Whitney Houston, Jennifer Holliday and Christina Aguilera. You also received a lot of fan feedback encouraging you to sing “male songs,” but when you finally sang John Mayer’s “Gravity” in the semi-finals, you were eliminated. What do you think of that decision now? Do you regret not sticking to the divas?

I’m happy that I chose John Mayer’s “Gravity.” I did it my way. I kind of knew at that point that my time was pretty much up. I wanted to be diverse. That was my point of doing the show. I didn’t want to be put in a box or a category. I wanted to be myself. So, I wanted to do a male song. I chose my attire, my background, and I arranged those vocals, and it was an iconic performance for me. That performance was next to “I Am Changing.”

You never want to be predictable. My goal was to just sing my ass off every week and make the charts because I wanted my resume to be great when I finished the show. And I left as a chart-topping artist.

You just turned 30. What does that mean to you?

Transitions, new beginnings. I’m a twin so it’s double that. I’m in a new relationship. I’m moving soon. I’m going back out on tour. I’m going back to Germany in December. I’m just looking forward to starting this new life. I’m excited to see what it’s going to offer me. There’s money in the bank and there’s love in my life, so I’m good.