Today I learned that LinkedIn, the popular social networking site, is now allowing people to use bare-butt photos in their profiles. I was a little surprised considering that — oh, wait. It’s Grindr, not LinkedIn. I am always getting those two confused.

Yes, bare butts weren’t previously allowed on Grindr because, I don’t know, maybe Grindr thought that was a little too on the nose? Like during a development meeting someone said, “OK, hear me out: instead of butts? NOT butts!”

Also, 10 months ago they didn’t even allow underwear shots but you could pose in a Speedo. Because when it comes right down to it, the line between decency and indecency is whether or not the fabric is designed to withstand chlorine exposure.

I wanted to read more about this update, but I realized that doing a Google search for “Grindr and butts” would change my algorithm forever. It’s bad enough that I did a search for “Ted Cruz and facial hair” one time and now I constantly get ads for beard oil and fascism.

On Grindr’s blog, Senior Director of Customer Experience, Alice Hunsberger describes the change as “a critical step towards our mission of allowing the Grindr community to express themselves more freely.”

But not too freely. The butt shots need to be tasteful. Grindr lists “Pornographic images & depictions of sex acts” and “Full frontal or graphic nudity” as not allowed. In other words, more Michelangelo’s “David,” less Cade Maddox.

This is what is allowed: “People of all bodies (all ethnicities, all sizes, all genders, and all identities) expressing their sexuality joyfully, underwear photos, non-pornographic sexual poses, some images of buttocks if they are non-graphic and without an overly sexual context.” Let Grindr illustrate what’s allowed and not allowed for you: 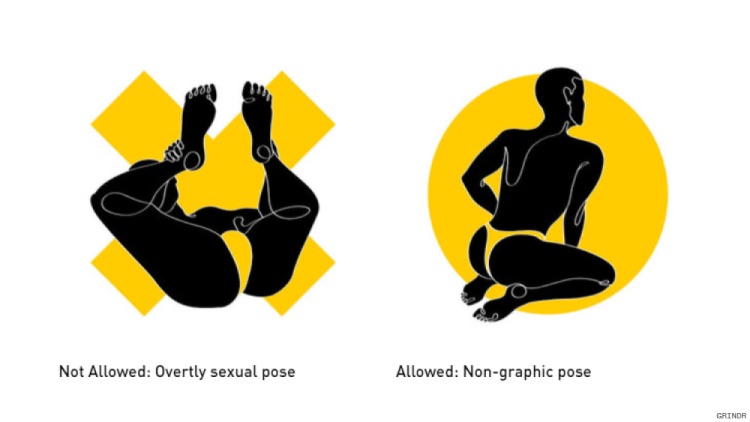 Grindr’s move to butt shots comes from a desire to make the app more like a like an “inclusive, sex-positive, and fun place to be,” writes Hunsberger. “All of our members deserve fair and equal treatment, regardless of gender, body type, or other physical attributes. Anything other than this is discrimination.”

Also nipples are allowed. Unless they are women nipples. “Unfortunately due to the current app store policies, we must include women’s nipples as a prohibited nudity category in our photo policies,” Hunsberger writes.

Which is bullshit. Those app store policies need to change. I get that they’re acknowledging the unfairness of it, but still.