Guncle to Guncle: Author Steven Rowley and Pride Source’s Editorial Director on the Glories of Gunclehood

I read Steven Rowley’s third novel “The Guncle” with my 8-year-old niece in mind. After all, his book makes a case for how parenting extends beyond a child’s actual parents. Uncles, aunts, friends, grandma, grandpa, babysitters: “It takes a village,” Rowley reminds me during our recent conversation.

It was “The Guncle” that reminded me of what my own niece, who has experienced abrupt life changes due to the pandemic and sudden family shifts, told me recently after I made an aside about how it’s unlikely I’ll become a parent at this point in my life. Ever the inquisitive one, she said, “What do you mean, Uncle?” I briefly explained that if I were going to parent a child, it would’ve happened years ago. She corrected me, reminding me that, in her eyes, I am a parent. “But you’ve got me,” she said, as my heart burst at the seams. 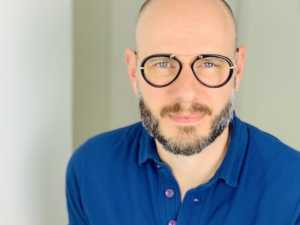 Rowley’s third book explores this very bond between Guncles and their nieces (and nephews) with astute, heartwarming observations, while illustrating how the term “parent” expands beyond traditional mom and dad roles. In the book, Rowley’s character Patrick is a gay man who spends his days in Mr. Turk caftans, soaking up the Palm Springs sun. He’s no longer the sitcom star he once was, so he’s got some time on his hands. That is, until his life is turned upside down when Maisie and Grant, his niece and nephew, lose their mother, also one of Patrick’s dearest friends and sister-in-law. Suddenly, Patrick, still working through the grief of losing his own partner, becomes the children’s temporary guardian. Just one who happens to love a draping caftan.

Rowley spoke to me from Palm Springs, where he lives, about the places he found inspiration for the book and why nieces and nephews share special bonds with their gay uncles.

Because of my relationship with my niece, I really identified with this idea of how Guncles can be an escape for the nieces and nephews in their life and can offer some stability when they need it most. Can you talk about that in terms of this story?

That’s incredible that you have such a parallel in your own life, and I do have five nieces and nephews. I don’t have children of my own, but there’s so many more LGBTQ+ parents doing remarkable jobs raising children, and I’m at awe of what they do, you know? It’s unarguably one of life’s great emotional experiences, and so I’m always conscious of not having that in my arsenal as a writer, and I felt I had things I wanted to say about kids.

This was a very interesting project for me, but I was surprised when I became an uncle how deep those relationships actually were to me and how connected I felt to these kids. Guncles have become a thing over the past five, 10 years, and so it’s not just a gay uncle but also a connotation of a larger-than-life figure; they’re sort of able to lavishly dote on kids, perhaps, in a way. They fly in from big cities for holidays.

My nieces and nephews, they don’t quite have a grasp on my life. They’re all on the East Coast; I live in Palm Springs. I have a house with a swimming pool. I don’t go to an office the way they see other adults go, and so they don’t quite have my life pegged. It was truly fun to celebrate the specialness of these relationships. You know, there was “Auntie Mame” first, the 1955 Patrick Dennis novel, but he was closeted and came out later in his life as at least bisexual. But it got me thinking, too, about a lot of these queer writers from the mid-century, like Tennessee Williams, or writers who created these larger-than-life female characters perhaps because they weren’t able to openly write about gay men, and that was really interesting to reclaim: that sort of Auntie Mame character as a Guncle.

Like Maisie and Grant when they visit Patrick, do you recognize a special level of excitement when your nieces and nephews come see you in Palm Springs?

For sure. Writing a story about grief against the backdrop of unrelenting, cheerful sunshine was interesting. And then there’s the sort of fish-out-of-water element. The idea of having kids here and seeing this lifestyle that’s very different from what they’re seeing, that’s where I had some fun, particularly, in creating JED, the gay throuple that lives just over Patrick’s wall on the neighboring property. Putting them in a situation where they might see different relationship models and types of families than they might see in suburban Connecticut was fun to play with.

I love that you come at family structure from different angles.

It’s a slight echo of who an uncle is, the “it takes a village” kind of attitude about raising kids. It does take more than just parents sometimes to successfully raise a child. And that more than two people would be in a relationship is really scary thinking to a lot of people. So it was fun to play with people’s expectations about who this throuple might be and divert those expectations a bit by making them very family-minded with legitimate things to contribute to the conversation.

What did you want this book to say about the meaning of family?

I wanted it to touch on the great history with a found family in queer culture and queer history. I came out in 1991, and so the tradition of found family in queer culture was something I wanted to touch on. And yes, Patrick is a blood relation to these kids, but the three of them sort of being thrown together as they are is really a unique circumstance for the three of them. The idea of just upending sound traditional structures and having it be more about acceptance and letting these kids be who they are.

I never really understood people who wanted kids just to be mini versions of themselves all over again. (Laughs.) There isn’t anyone that is so great that what the world needs is another version of them, you know? And so the great joy to me in having kids would be to see who these people become on their own terms, and so I wanted to touch on all of that.

What do your nieces and nephews think of the fact that their Guncle has written a book?

They’re still a little young. But I’m sorry for anyone who happens to be related to a writer (laughs). We do tend to lift things. But the book is dedicated to the five of them, so to the extent that I may have borrowed from their lives, I hope they will forgive me.

In the acknowledgements, you also say that your editor, Sally Kim, recognized this story before you did. Could you talk about that and how it developed?

It stemmed from a week where my brother brought his two boys to visit. He’s an attorney in Boston, and he was here with the boys for a week and after about 12 hours here got called into court, basically, to represent one of his clients. He had to leave, and I suddenly was left with the two boys. I felt like an understudy being thrust into the lead role. I documented the whole thing on Instagram. My editor was watching me flounder a bit that week, and she said, “You know, I think there might be something to write about here.”

So some of this is based on your own experiences.

It’s a combination of a number of things. One is, I’ve had a long fascination with “Auntie Mame” and other magical caregiver stories: Mary Poppins, Maria from “The Sound of Music.” It seemed fun to me to create a queer entry in that genre.

I imagined the book as a much lighter comedic novel at first, and a month into the writing process I lost one of my very best friends from college to breast cancer. She left behind a 6-year-old son, which was devastating for me and for her family. But the idea of grief in children was something I was suddenly thinking about much more seriously.

How else do you explain this relationship between Guncles and their nieces and nephews?

I do make a joke in the book. Patrick says to the kids, “You know, I have a swimming pool with no natural heirs. You should be nice to me.” (Laughs.) I think there’s an absolute acceptance of them for who they are, and I think a lot of Guncles… and justice for lesbian aunts! We need a better word than “Launt.” But we are delighted in them for who they are. We’re not the people in their lives that put any pressure on them to be anything other than who they are. I think they respond to that energy.