Homosexuality, the Middle East and Self-Identity 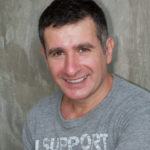