House Votes to Impeach Trump, Makes him Only President to Be Impeached Twice

In a historic development, the U.S. House voted Wednesday to impeach President Trump for high crimes and misdemeanors, making him the only president in U.S. history impeached twice, after instigating an attack on the U.S. House.

The impeachment vote on H. Res. 27 in the U.S. House was 231-197 and largely along party lines, although 10 Republicans, including Rep. Liz Cheney (R-Wyo.), joined Democrats in voting to approve the article of impeachment. House Speaker Nancy Pelosi (D-Calif.) presided as the vote was called. 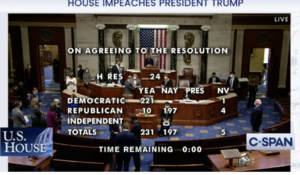 Impeachment proceedings will now head to the U.S. Senate, which under the Constitution is required to hold a trial, a process that will continue into the Biden administration. It will take a vote of 2/3 of the members present to convict Trump, which may be in tall order in a 50-50 Senate.

Although Trump will be out of office, his impeachment and possible conviction represents a symbolic stand against his attack on the U.S. Capitol and would bar him from holding federal office in the future.