Co-op residents share resources and look after one another

For Marissa Klee-Peregon, 27, Nimblewill Cooperative in Kalamazoo is a space where she can practice interdependence, instead of independence.

A cooperative home, or “co-op,” which centers the experiences of queer and trans people, Nimblewill, Klee-Peregon says, is a place where “we share power, resources, and decision-making; where the resources and affordable housing we provide can lighten the burden of living within capitalism; where we understand that each individual’s wellbeing is dependent on the wellbeing of the community as a whole.”

Cooperative living is a system that allows members living together in a house to cooperatively create house norms, labor systems and to share food and supplies. Often, such systems are based on principles of equity and social justice, where each person’s portion of rent may be defined by their economic status. Considering the negative wage gap for gay men, bisexual folks and transgender people, compounded with the housing crisis affecting LGBTQ+ folks, a co-op housing situation can represent a life-saving change and a fresh start for queer people who have experienced trauma around housing and community. 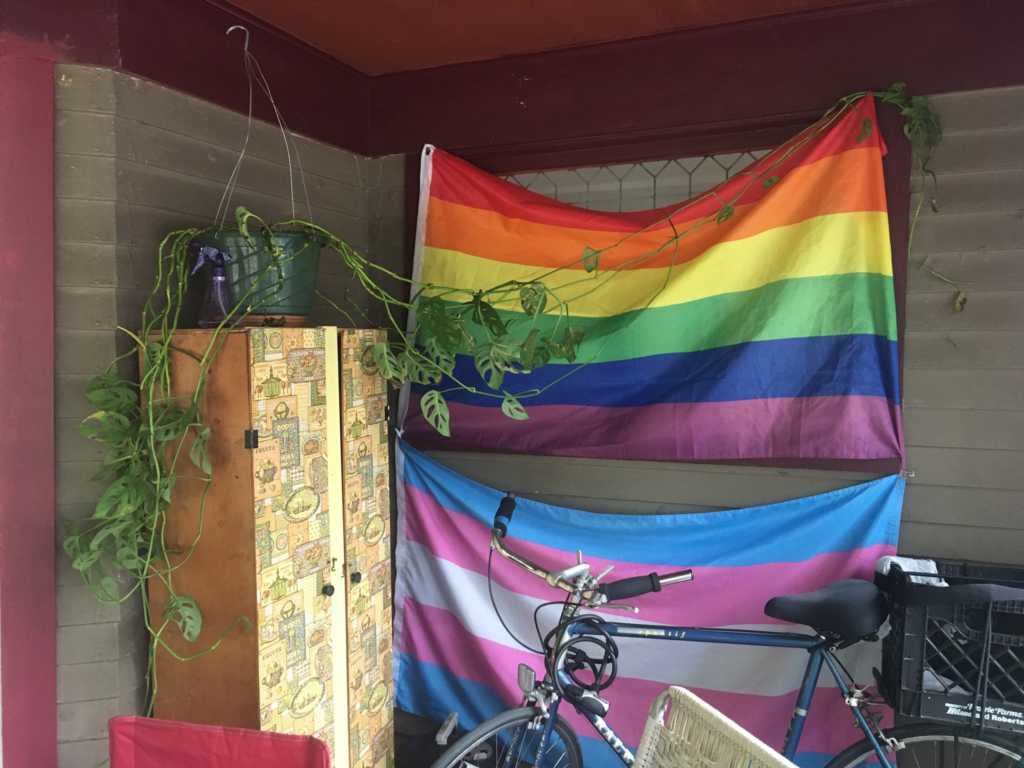 Housing co-ops for queer people are one answer to the housing crisis faced by LGBTQ+ people. According to a 2020 study by the Williams Institute, only 49.8% of LGBT adults own their homes, compared to 70.1% of non-LGBT adults. Moreover, among young adults aged 18-25, LGBTQ+ people have a 2.2 times greater risk of homelessness than non-LGBTQ+ people. Housing co-ops are often more affordable and provide community support to help a person get back on their feet and out of homelessness.

Finances are not the only reason why LGBTQ+ members choose to live in a co-op. For those whose families are less than supportive, outright discriminatory, abusive or violent, cooperative living can foster community like no other.

Qynce (who asked that we only refer to him by his first name), 25, a member of the core group that founded Nimblewill Cooperative, also shares this vision. Creating a safe space for all queer and trans people was of utmost importance, and to them, that meant creating a substance-free home.

In Kalamazoo, the local queer organization OutFront organizes Pride, which is primarily sponsored by Bell’s Brewing, so alcohol is a primary focus of the Pride event, explains Qynce. “I’ve heard numerous people say that Kalamazoo Pride is only fun if you’re drunk, which is insidious to me, given queer and trans people are especially vulnerable to addiction.” Seeing a lack of avenues for creating meaningful queer and trans community in the city, they created Nimblewill as one of those alternatives, specifically one where a sense of community can be created while resisting the dominant culture that they say coerces queer and trans people into addiction.

Dequan Gambrell, 27, a member of the cooperative living space Rivera, which is part of the Inter-Cooperative Council at Ann Arbor, also decided to live at a co-op in search of community. “I was looking for community with BIPOC as a University of Michigan senior who hasn’t really known any in my experiences here, and also because I was trying to build a safe space for POC at a predominantly white institution.” Rivera is a house that centers queer and trans people of color, and hence, a perfect choice for Gambrell.

Co-op housing that centers queer voices can be a unique place to find community outside the often patriarchal structures of a traditional nuclear family. Questioning the patriarchal norms of the male head of the house, these homes are often non-hierarchical, based on equal participation in decision making and labor, and serve as spaces of acceptance for those whose biological families may not be as accepting. Some co-op members do not view their housemates as an extension of family, but rather a form of community stronger than what the term “family” can encapsulate.

“I believe in the abolition of the family and am much more concerned with the creation and nurturing of communities than continuing to use the idea of the family, which is a legal structure primarily created to control children and treat them as property,” says Qynce. “But my housemates and neighbors are my chosen community, and I love and care deeply about them.”

In housing co-op communities, members support each other whenever someone needs something and hold each other accountable in a refreshingly forthcoming way, according to Gambrell.

Klee-Peregon agrees. For her, the relationships within Nimblewill and KCH are as important as familial relationships. “My housemates and I have sat with each other in the ER and called off work to support each other through crises. We’ve memorized each other’s allergies and we’ve established shared rituals and traditions,” she says. “If something hard is happening within my house, I tell people I’ve got ‘family stuff’ going on, again, not because that most accurately describes the nature of our relationship, but because it most clearly communicates the importance of our relationship to the outside world.”

Klee-Peregon wants people to understand that her housemates are her community, and that living there has helped her see that community ties are just as essential and just as valuable as traditional family ties.

“I was experiencing my own personal housing crisis when I originally joined a co-op,” explains Qynce. “I had been living on my friend’s couch, and because of what had happened [with] my previous living situation, I was deeply terrified of the idea of living alone, but had nobody in town who I could move in or find a place with. In that situation, co-ops were a perfect solution for me.”

Klee-Peregon says that “living with queer and trans people who are committed to the creative project of collective liberation has been wonderful. Being part of this community has helped me see the incredible possibility in queerness and has helped me approach my own queerness with a sense of play, pleasure and potential. And that has meant a lot.”