How Randy Rainbow Is More ‘Raw’ Than He’s Ever Been

There are far worse things happening in the world, clearly, but political-parody sensation Randy Rainbow does have a bone to pick with some folks. And this time, it’s not with Marjorie Taylor Greene. Not even with Donald Trump.

“I’m throwing my team the hell under the bus,” he joked on camera, after jumping on Zoom last minute when he was reminded of our interview, which was “on everyone’s calendar but mine.”

“I was getting ready to take a bubble bath,” he said, “but I’m happy to be with you.”

At the time of our interview in April, Rainbow was making his press rounds to chat about his debut memoir, “Playing with Myself.” The humanizing book recounts his life growing up as an imaginative and misunderstood boy, before he became known for his playful digs at right-wing figures, reworking famous Broadway songs to poke at the sheer insanity of those making really terrible political decisions. We meet Nanny, his adoring late grandmother; we go back to the video that launched his viral career, when he pretend-called Mel Gibson; we learn about his comedy-meets-Broadway origins and how it became a full-blown career, earning him three Emmy nominations and famous fans such as Patti LuPone and even, yes, Carol Burnett.

Before he launched his summer tour, which stops in Grand Rapids at the DeVos Performance Hall on Sept. 10, Rainbow spoke about his many mom fans, giving people real reasons to hate him, and the “vulnerable places” he went to while writing this book.

I was talking to a friend about interviewing you and he said, “Will he sing?”

Why would I just sing? See, this is the fake news on me. Everyone thinks I’m a lunatic who bursts into song.

Why would you just sing? Perhaps because you’ve built a career on it, I don’t know.

True. If we were out having a couple of drinks, I probably would be singing constantly and you would tell me to shut up. But not always.

In addition to LGBTQ+ fans, you’ve got a lot of mom fans.

They hit on me. It’s inappropriate.

Mothers don’t know consent. I take it as a compliment. I see it as a Barry Manilow/Liberace kind of thing.

So the book: You are extremely vulnerable in it, and I just want to tell you that I appreciate you sharing intimate parts of your life with us. I have a real appreciation for the fact that you went to some complex and complicated places. With your family, especially.

I’m glad I got on the Zoom today, because that’s really nice to hear and I appreciate that. I did go to some vulnerable places. I was certainly more raw than I’ve ever been before publicly.

Was there a moment where you decided that, “If I’m going to write a book, I need to tell that part of the story to tell my full story”? And if so, when was that moment in the process for you?

From the beginning, I had every intention of being as vulnerable and as real as I could muster. People have been so generous with their praises — mothers across the country. And everyone who has written to me over the years, especially the last five years, and has come to my show and my meet-and-greets, they’re so generous with their praise and… gratitude is the word.

But they don’t really know that I am a complicated person who has my own insecurities, and flaws, and heartbreaks, and has faced my own adversities in life. So I wanted to really seize the moment and, as a gift to those followers who have been with me for years and to myself, to really come out and put it out there on the table. 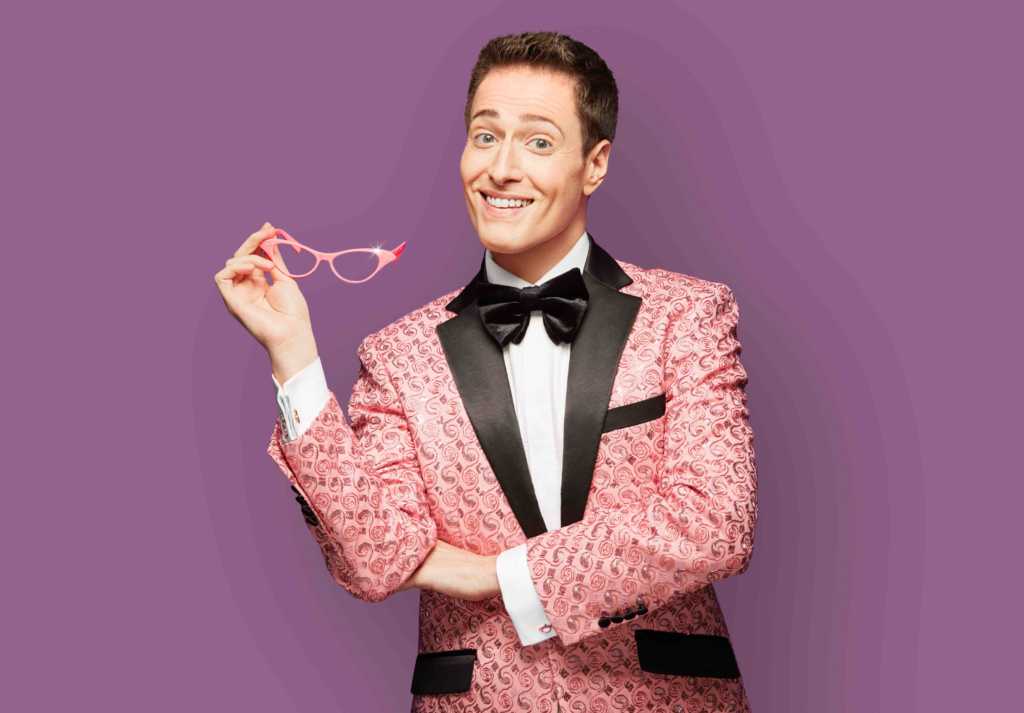 What do mothers of LGBTQ+ kids tell you?

I meet so many mothers. So many of them come to my live shows, and a lot of them bring their little kids who sometimes dress up like me and they look like Liza Minnelli, and they’ve got the bows and the pink glasses. And they say a variety of things, one of which is lovely: “Thank you for being a role model to my child as someone who is unabashedly being himself.”

And then sometimes at the meet-and-greets they ask: “My son is behaving this way and I want to support him or her or them. What is your advice?” I’m not an expert on the subject, but I do know that I had a mother who, in my opinion, did the perfect thing, which was create a safe environment for me to be whatever it is I was wanting to be. She didn’t push [me] one way or the other, she didn’t make it her own thing. She just simply provided a safe space, and to me, that’s the best advice I can offer any mother with a little boy or girl like I was. I hope that some of those mothers will read this and get something valuable from it.

This is your first book. So what was it like? Did you get up in the middle of the night with a thought and write a whole chapter at 3 a.m.? And how did it compare to writing your musical parodies?

Yes to all that. I don’t have to tell you: As a writer, you walk around with these things just popping into your head. So yes, there was a lot of jumping up at 2 or 3 o’clock in the morning and taking lots of notes. I found the experience to be a lot of things. It was much more emotional than I thought it would be; I was crying a lot through the good and bad.

These are the memories that have been lighting the corners of my minds, to quote Barbra, for many years, but I never had an opportunity to really flush them out and put them down on paper. So it was very cathartic, very emotional, fun, I loved it, and different in that it was the first time I had done any sort of real autobiographical writing. So that was a pleasure.

Again, one of the most satisfying things about this is that I can say if you love me… because some people love me, some people hate me, and my first thought when someone says anything positive or negative on social media or anywhere else is it’s interesting because you don’t know me yet. You actually don’t know me. So here’s a little bit of the real me, and then decide. Now you can really hate me. Or love me. Choose. But if you’re judging, again, that two-dimensional, scripted, campy persona, then you don’t know the full story yet.

And there’s an entire chapter for those who are still hating you because of tweets you sent in 2010 and 2011 that were deemed racist and homophobic, which you apologized for.

There’s plenty of sunshine and Santa Claus in this book, meaning I talk a lot about the happy things and the joy and excitement and fun and positive, but that was something that was not so fun or positive that I went through. And I wanted to talk about it because it’s a topic that I’m interested in. I’m interested in that conversation, and I now have a personal perspective that I didn’t have before. So I wanted to add that to the public conversation. It’s not a 15-page mea culpa, it’s not a whole apology, because I’ve apologized for what I’ve wanted to apologize for.

It was humbling, I learned a lot, but as I say in the end, I can’t wrap it up neatly. It’s a very nuanced discussion, especially coming from someone who is a comedian and doesn’t like putting restrictions on art.

Given what happened the night that Will Smith attacked Chris Rock on stage at the Oscars after Chris’s joke, does it make you concerned at all for the state of comedy? It was Kathy Griffin who recently expressed concerns about others following in Will’s footsteps when a joke is made that someone doesn’t like.

That is a concern of mine, but I don’t know if it started that night. I think that we’re in a very weird place, and people are angry and taking their aggressions out in places that it really doesn’t belong.

We’re in such a horrible place in the world and there’s war going on and pandemics, and it’s just a really heavy time. And I felt bad for a country who tuned in to get a little levity and escape for a couple of hours, and had to see this hero, this person that they idolize… I certainly am a Will Smith fan. They had to see him attack another idol and another hero of ours. That was just so sad to me. It was just sad that we couldn’t get that little escape that we just wanted so badly.

You said that you were concerned before this even happened about performing your own political comedy.

People ask me all the time, “Are you concerned about that?” I am satirical and I spoof. My satire certainly leans in one direction. But it’s something I try not to really overthink because what can you do?

I wonder if it’s easier for people to digest your comedy since it’s filtered through an almost cartoonish lens.

I think I hope so. It’s my opinion that I’m tackling these topics in the most innocuous way possible with show tunes. So it interests me when people get really ticked off by any of my work. I have to question their intentions because it’s like, “Are you really that incensed about a song from ‘The Music Man’?” People are really interested in being angry these days.

Going back to the book, what was the most emotional topic for you to write about?

Certainly anything to do with my grandmother, my Nanny, was very emotional.

She’s in the book a lot. It’s not only a beautiful tribute to her, but to unconditional love and what that can mean to somebody.

You have to write the foreword for the paperback edition. You’re saying such nice things and things that I hoped came through, and that’s so nice. And she does pop up in the book, these cosmic entrances that she makes. Things that I hadn’t even thought about until I was writing about emotional things.

When I talk about my cat dying at the beginning of the pandemic, Nanny made her presence known, I believe, in moments like those too. That cat chapter — I feel there should be a disclaimer to the pet people in my audience.

I have been hearing from a lot of the readers who are cat or pet people who say that it’s brutal and hard to get through, which I like. That means to me that I did it right. Because it was a brutal experience because we locked down, and then my cat, the only other soul that I was sharing this experience with, got sick two days later. So that was hard. But the happy ending is I got a new cat and she’s sitting right here judging me like a bitch.