Michael Lluberes was in middle school when he first encountered the 1960s musical “The Fantasticks,” and he immediately thought of Luisa, the young, idealistic girl who falls in love with the boy next door, as a gay boy.

“Honestly, from the very beginning, I really identified with her,” said Lluberes, who serves as the artistic director of Flint Repertory Theatre. “The idea of this odd boy in the middle of nowhere who had these enormous feelings who thought she was really, really special and nobody understood her.”

Now, decades later, Lluberes is the catalyst for an updated production of the show at the Flint Rep, the first company to produce a new version of “The Fantasticks,” one that the original lyricist, Tom Jones, rewrote so that Luisa is Lewis and the two lovers central to the story are both young men. Jones also replaced the two fathers with two mothers. 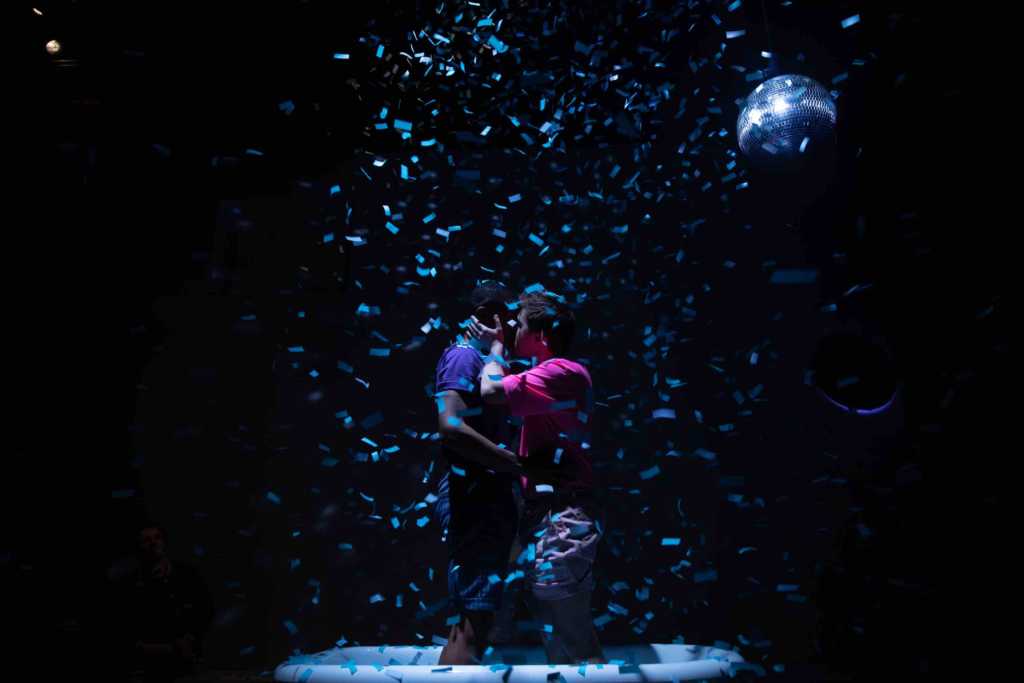 “The Fantasticks” first opened off-Broadway in 1960, centered on a story about two fathers who trick their children, Luisa and Matt, into falling in love with each other by pretending to be enemies. It ran until 2002, reopened in 2006 and ran until 2017, making it the longest-running musical in the world. A perennially popular musical, during non-Covid times it was featured in around 250 new productions annually.

While Lluberes had always wanted to do a gay version of “The Fantasticks,” he thought it would be impossible to get the rights, so he let it go. Then the pandemic happened.

“I thought a lot about the kind of theater I wanted to make when we got back into the space,” Lluberes said. “And I kept thinking about ‘The Fantasticks’ because it was something in my memory that was so pure and innocent and joyful and simple.”

So, he decided to contact Jones, 94, and ask permission. Lluberes said Jones told him no one had ever brought the idea up to him. “I wasn’t going to do a big thing — just change Luisa to Lewis, change the pronouns and pretty much leave it the same,” Lluberes said.

Jones, on the other hand, felt it needed more work than that to be successful and told Lluberes that he would do the rewriting necessary. “I thought it was an interesting idea,” Jones said. “I called him back in a week and said, ‘You know, this would be interesting to do, but I would like to do it myself. I really would like to get in and make it in a way that if it works, other people can do it as well.’”

Lluberes said the changes make all the musical’s themes come alive in a really exciting way.

“I told Tom that my way into it is when you’re gay and you fall in love for the first time, you discover who you are through the person you love,” Lluberes said. “It’s like you staring back at you to have those feelings, that identity explosion that who you love equals who you are. The play comes to life in such a fresh, exciting way.”

Neil McCaffrey will be debuting the part of Lewis, whom he describes as being “super romantic,” someone prone to quoting Shakespeare or “The Great Gatsby” in his super-idealized version of what love is.

“He wants something to happen to him,” McCaffrey said. “In the first act, he lays out his fantasy, and when it comes to fruition, we have a happy ending. But then, Act Two is all about what a happy ending means.”

McCaffrey said there actually aren’t that many changes. His character, for example, still says he wants to be a princess, because a boy can say that. But when the lyrics talk about going to town wearing a golden gown, they instead change it to crown.

“It’s not like we have to change a whole backstory for Lewis to Luisa,” McCaffrey said. “By changing the gender, a lot doesn’t change. We can just play the text as it is.”

When asked why someone should come see this show, McCaffrey points out that it is Pride Month, but there is also something in the musical for everyone.

“Yes, if you love ‘The Fantasticks’ and you’re also a proponent of LGBT representation, absolutely, come see this,” McCaffrey said. “But it’s one of our most beautiful musicals about humanity in love. It’s such a universal story.”

Jeremiah Porter, who plays the part of Matt, said that until Lluberes reached out to him, he didn’t know how timeless this piece was or how much a part of musical history it was.

“Tom was really trying to push the narrative of love when he first made the show,” Porter said. “Now, with where we are today, there are certain concepts of love that we understand, and there are certain concepts and areas of love that we still need to begin to explore. Using this story that is so well known to so many people gives them an opportunity to not feel out of their element because they know the narrative, but they get just a little bit of seasoning. It’s really suited for today because it gives people a safe space to further their boundaries.”

Jones said that the leasing agency, Music Theater International, has already been getting a lot of inquiries about this version. Jones’ desire is that future productions of this version would have a subtitle: “The Flint Fantasticks.”

“I intend that when people perform it, they would call it that,” Jones said. “And they would put in the program for each production about me getting that call from Michael and about the whole adventure we’ve had doing it together.”

About the Author: Bridgette Redman

Bridgette Redman is a second generation journalist who covers the theater, the arts, travel and spas. She writes for newspapers and magazines across the country including AARP Magazine, American Theater, The Chicago Reader, OnStage Blog, Los Angeles Downtown News, The Argonaut, and Entertainer! in Phoenix.