To a casual observer, it may not seem unusual that an ensemble made up entirely of female musicians will hit the main stage at the Detroit Jazz Festival this weekend, Sept. 2-5. But for Allison Miller, who will play drums alongside the five other powerhouse female jazz artists rounding out the group ARTEMIS, it may have seemed impossible only a handful of years ago.

There was a time in Miller’s early career when she felt “silenced and invisible,” as she wrote in a 2013 Huffington Post essay, “’You Don’t Play Like a Girl’: Queer in a Jazz World.”

In her essay, she was forthright about her feelings then: “I didn’t know how to be all of myself. How could I speak up without the fear of being the lesbian feminist buzzkill?”

Today, Miller acknowledges it as a turning point in her life when she started vocalizing what she really thought in response to chauvinistic comments she encountered within the chummy, male-dominated world of jazz. “I started speaking up and challenging men when they crossed that line from funny to sexist,” she wrote.

Many of the men she challenged were receptive, and while some did, in fact, stop working with her, Miller has been a bold, vocal feminist and self-advocate ever since, a choice that has served her personally and professionally.

“By writing and publishing that article, I made a promise to myself that I would never again bury my truth,” she tells Pride Source. “Embracing my full self enabled me to fully tap into my artistry and experience creative agency.”

Miller says today, nearly 10 years after the essay was published, it “fortunately” feels dated to her. “The world is a different place, and I have personally gone through a world of change,” she says.

And identifying as queer, she says, has become a “new normal.” 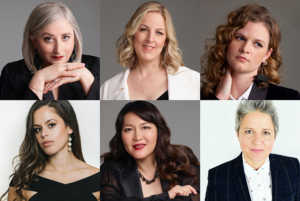 Still, Miller remembers the wave of phone calls and texts she received from colleagues, thanking her for having the courage to write such a truth-telling piece. “It was then that I realized being out and proud in the jazz community was my duty and that my activism and music must walk hand in hand,” she says. “I hope that, by voicing my truth and publicly embracing my queerness and my queer family, I have helped younger queer and trans artists feel safe to be their whole selves.”

Miller acknowledges that younger generations are “actively breaking down patriarchal oppression.” But, as evidenced by recent Supreme Court decisions, for people who are not white men, “we are not out of the woods yet — our freedom is being stripped away again. We’ve come a long way since 2013, but we have a lot more work to do.”

On the whole, the jazz world still skews mostly male, which only makes Miller’s impressive list of accomplishments shine brighter. Much of Miller’s storied career has taken place in New York City, but these days she can be found crisscrossing the globe to share her love of jazz, whether she’s playing, teaching or composing.

She teaches at multiple renowned music programs including the New School for Jazz and Contemporary Music (where she was named a Melba Liston Fellow in 2019), the Stanford Jazz Workshop, Centrum in Washington State and Geri Allen Jazz Camp in New Jersey. She also serves as artistic director of Jazz Camp West in northern California.

Miller is also a three-time Jazz Ambassador for the U.S. State Department. Additionally, she has served as Monterey Jazz Festival’s Artist in Residence in 2019 and was appointed Arts Envoy to Thailand for her work with Jazz Education Abroad.

It’s not all jazz, all the time, though. Miller’s boundary-breaking approach has seen her working alongside queer singer-songwriters like Ani DiFranco, Indigo Girls and Brandi Carlile, and she has toured with avant-garde saxophonist Marty Ehrlich and the legendary late organist Dr. Lonnie Smith.

But Miller’s career of late has centered on her affiliation with ARTEMIS, a group of six accomplished female musicians whose eponymous 2020 debut (on the Blue Note Records label) has been described as “state-of-the-art modern jazz, alternately hard swinging, contemplative, commercial and abstract” by Allen Michie in a review for  online arts magazine The Arts Fuse.

Miller joined up with the group in 2017. In addition to her work behind the drums,  ARTEMIS includes pianist and musical director Renee Rosnes, clarinetist Anat Cohen, tenor saxophonist Nicole Glover, trumpeter Ingrid Jensen and bassist Norike Ueda. The musicians, who have each staked out an impressive solo career, hail from across the globe, from the U.S., Canada, France, Chile, Israel and Japan.

While some critics have termed ARTEMIS as a “supergroup,” Miller shies away from the label — and all labels, really. “I think these terms represent an example of media’s addiction to labeling,” she says. “ARTEMIS is a group of jazz musicians at the top of their game who have committed to making music together and developing a band sound. We love playing together and recognize our special music chemistry. We are not a gimmick.”

Miller says the press has an important role to play, but at the heart of it all is the music. “In the end, we and most musicians I know are in this for the creative journey. We want to humbly continue to grow and evolve as musicians and human beings, and we hope to do so with other musicians who are dedicated to the same. This is what ARTEMIS represents to me.”

It’s been more than 35 years since Miller first picked up a drumstick at age 9, but she’s still in love with the instrument she says she is still grateful to play. “I always wanted to play the drums from the time I can remember,” she says. “Music literally moved me and the beat was always where my soul gravitated. I still love drums as much as I did when I was a kid.”

Partly, it’s because there’s a certain physicality related to playing the drums — “the dexterity it requires, the fearlessness it demands, the way playing makes me feel absolutely in the moment and the way a groove makes the audience move,” she says. “I feel so grateful that I get to be the rhythm maker for a living.”