Just ahead of the 2018 midterms, I was attending a GOTV prep meeting for Mallory McMorrow’s first state Senate campaign when I received a text from my sister’s eldest. A college student, they asked if I was OK. Did I need to talk? Nothing registered. Soon I determined their message was in response to the notorious Tree of Life massacre, now recognized as the most devastating antisemitic hate crime perpetrated against the Jewish people in the U.S.

Suddenly, I was at a loss. Raised an observant Jew, I no longer practice. Years ago, I made peace with my inability to believe. Yet at that moment, in that room, among political allies, I felt alone. People spoke; only their lips moved. I felt a deep urge to be with “my people.” To be clear, my immediate family still practices all the traditions that I have shed and eschew. But somehow, this avowed atheist retains a phantom Jewish limb.

A vigil was hastily organized, as they often are. It would (naturally!) be held at the synagogue in which I was raised, in Oak Park, Michigan: Beth Shalom, a Conservative shul. That is to say, Conservative by comparison to Reform or Orthodox. I’ll simplify to add I spent many Saturday mornings at services, survived my pre-teen bat mitzvah and have a lot to say about curious customs like keeping kosher that I may or may not care to explain. (It’s OK to ask.) But I hadn’t been inside that particular building for a ceremony in a good long time.

Uncomfortable alone, I asked a friend to join me. A friend from the community. Now, when I say, “the community,” as I have written for nearly six years for Pride Source, I don’t have to explain. Like sisters, she and I have our differences: For example, she’s not Jewish. And I’m not Italian. Or trans. I’m also a generation older. And she’s always game for an adventure.

The sanctuary was packed with congregants — long before Covid. Religious leaders from all walks spoke. Hymns were sung. The crowd dispersed. 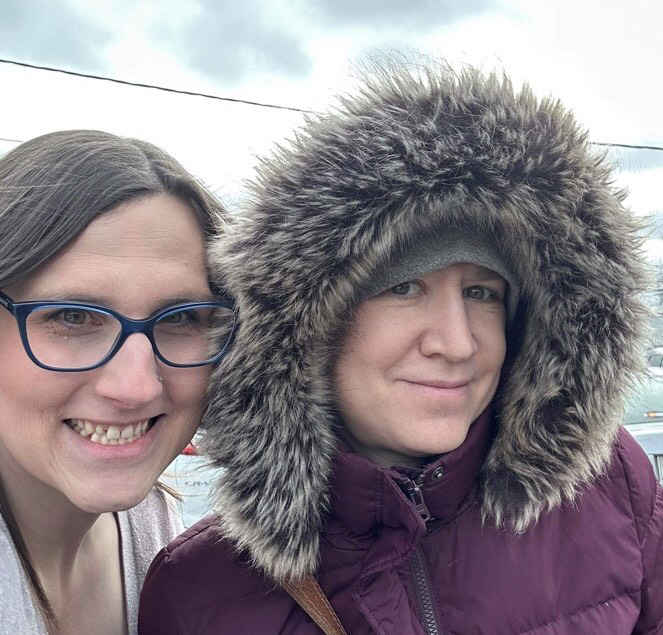 My friend who is always “game for an adventure” was with me when I learned of the latest massacre, this time in Colorado Springs, a hate crime committed against queer people. We were having brunch, because, well, we’re queer and it was Sunday. I responded to a notice on my phone; she had already learned the news. Later, a text from another close friend, about a vigil to be held at Affirmations Monday night. Hours earlier I had posted that on my timeline. Would I attend? With some effort, I did.

I’m not one to respond to attacks with anger, but with fear and anxiety. When Roe fell, first I hollered, then grieved deeply — and still do — despite our own state’s recent good fortune. The fallout from Justice Thomas’ comments is clear: No one is safe. They’re coming for us. All of us queer folk — we have targets on our backs.

That brings me to that room, at Affirmations, the gallery space. I can’t estimate crowd size, except to say the event was well-attended, and to please ask the police present for an estimate. Affirmations’ Dave Garcia drew us together before the speakers took the microphone. They included various community leaders and a heavy contingent of law enforcement — perhaps overly. Later, Dave explained to me he invited leaders from the LGBTQ Community Centers Network, some of whom were in attendance, others were not. I saw many Affirmations regulars, but there were also many I didn’t see. I felt like I was where I needed to be at that exact time. This was my community center, too. And that brings me to Michael.

Michael Sharp is part of an LGBTQ+ radio collective who hosts a weekly show. He’s also an original board member of Affirmations who now lives in the D.C. area. Michael and I have spoken exactly once, in 2018. It was maybe a year after I began writing for Pride Source. For a while, I was exceedingly scrupulous about accepting friend requests on Facebook from people unknown to me in real life. Somewhere in Michael’s profile was a reference to Affirmations and our friend in common was Jan Stevenson, former Affirmations executive director and former publisher of Between The Lines. He seemed safe enough.

I don’t remember how a stranger and I ended up speaking on the phone, since I tend to be reserved. But he said a few things that stuck with me. One, he was sure we’d have eight years of the grifter-in-chief. I protested, but he sounded confident. When we meet in person, I intend to remind him he lost a bet.

Mostly, though, his message was about family. Michael is rightfully proud of his husband and their son, and I encourage anyone to ask him to show you photos because they’re not only an attractive family, they appear genuinely happy. What Michael said to me went something like this: Isn’t it remarkable that of all communities, the LGBTQ community is the most diverse? We exist and have existed among all ethnicities, religions, political beliefs and so on throughout time. Yet we’re all one family. All of us. One family.

Yeah, Michael, sure, I thought. I could think of a number of individuals I wouldn’t invite to my birthday party. I understood the sentiment. But it didn’t ring like a bell.

Recently, after the Club Q shooting, I arrived in the crowded space at Affirmations and located my brunching friend. We hugged. I give her a lot of credit for her tireless part in making the Hate Won’t Win campaign a success, and her ability to chat up anyone who doesn’t slam the door in her face. And to always leave you with something to think about.

As the speakers began, I found a comfortable spot near a wall.

From a friend I had looked for, a text: “Nobody told me. I would have come.”

Some expressed anger. Others, fear or grief. Vows were made by legislators and law enforcement. The community cried out for our leaders to do better. Stop the violence! Do we need more active shooter drills or is it time to arm ourselves? What about the epidemic of violence against and murder of trans people? Let’s circle the wagons instead of shooting at one another.

Like any family, the LGBTQ+ community continues to grow and evolve. We can’t even agree on what to call ourselves. We respond to triumphs and tragedies in different ways. So if you plan to memorialize the five who were murdered in Colorado Springs, do what is most meaningful to you — whether that means lighting a candle, offering a few dollars or kicking up your high heels with your fam. Or, like me, stepping out from behind those bifocals to express yourself.