Is the LGBTQ+ Community Really Welcome in Pure Michigan? Michiganders Question the Campaign.

The license plate in front of them might read “GOBLUE” with a little “Pure Michigan” on the upper margin. Checking into a hotel, tourists might flip on the TV to hear Tim Allen’s voice luring them to Pictured Rocks, “the purest of Pure Michigan. Your trip begins at michigan.org.”

Assailed from all sides by the notion of Michigan’s purity, said tourists might look it up. They’d find a high production value roundup of some of the state’s gems. From fine dining in Detroit to the Calder Dairy in Carleton, Pure Michigan’s lineup spotlights marquee destinations alongside the mom and pop — pure but not Puritan, it also features beer gardens and distilleries.

Pure Michigan has won national awards for its work — the ubiquity of the slogan alone speaks volumes about its reach and impact — and it offers an undeniably impressive directory of the state’s small businesses, including queer ones. That said, there is only one page on the Pure Michigan site devoted to LGBTQ+ travel, and some business owners are saying that’s not enough.

Vice President of Travel Michigan Dave Lorenz, who oversees Pure Michigan and is responsible for leading the state’s tourism initiatives, says that the breadth and depth of the campaign’s coverage comes down to budget and time.

“We have a spring/summer guide and a fall/winter guide, and that’s basically covering everything,” Lorenz said. “So we generally have some kind of either a feature or a mention of something to do with LGBTQ+ and then same thing for things like travelers with disabilities and pet travel, child travel, senior travel. Our goal is to try to be welcoming to everybody, to provide some specificity for unique interests or individual interests, while at the same time providing information that would be beneficial for everyone.”

“So we generally have some kind of either a feature or a mention of something to do with LGBTQ+ and then same thing for things like travelers with disabilities and pet travel, child travel, senior travel.”

In many respects, Lorenz is Mr. Michigan. His résumé boasts nine years at Meijer. He recently vacationed on Beaver Island, which he and dads everywhere will tell you is the only place in the U.S. to have been the residence of a monarch (Mormon leader James Jesse Strang). He even indirectly implies his un-coolness as a “straight white old guy” with a self-aware earnestness that forces a smile. 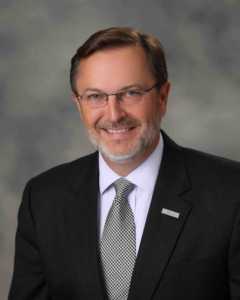 Lorenz has a lot of love for the mitten, and he’s proud to helm the state’s efforts to market itself as welcoming to all travelers. He said that he would like to get to the point where the state is able to publish more materials marketed toward LGBTQ+ travelers, and in the meantime, Travel Michigan has been bringing in queer travel writers and influencers.

“The thing is, it’s not as though we’re saying, ‘Hey, you are gay and you are welcome,’ in advertising. We’re just literally saying all are welcome … I admire those who will put together ads that are specifically targeting different groups. I think it’s more important for us to be thoughtful of the thought that we are all the same in the most important and essential ways. We’re all human. We all want to be loved. We all want to love, we all want to have freedom to travel. We all want to be able to be who we are and express who we are freely.”

Lorenz said that he’s experienced that sentiment in practice at queer destinations in Michigan. He recalls his stay in Saugatuck at The Dunes Resort, one of the largest LGBTQ+ resorts in the U.S., with particular fondness.

“Here I was a straight married guy, right? So I have these perceptions going in. And then when you go there, you see how welcome you are, as well,” he said, recalling his visit.

Lorenz hopes that the same experience is possible for others, and he encourages it in his annual address to the travel agency at the Pure Michigan Governor’s Conference on Tourism. The message of his speech, he says, focuses on Michigan “as [being] welcoming as possible in the most welcoming state in the country.” It’s also a call to action, as “we need to do more than just what’s necessary legally, morally or whatever … Often the travel industry is the conscience of the community as well. We’re the ones saying that ‘Hey, for our industry to survive and for our community to prosper, we need to be thoughtful about these things.’”

“We’re a 501(c)(3) [nonprofit] that caters to marginalized communities,” Sandcastle said. “As a 501(c)(3) and a safe space, for us [the LGBTQ community], we haven’t received any resources from any institution or government entity. Locally as well. The city council knows what we’re up to, we’ve invited them to events. The organizations like us in the trenches that put out fascism and patriarchy’s fires, there’s never quite enough time for us.”

Karen Hilt of Traverse City thinks the state hasn’t met the mark. A board member of Up North Pride — which is listed on the Pure Michigan LGBTQ+ page — and a business owner who sells Pride merch, Hilt noted that some stores on the page aren’t queer-owned. Hilt believes Pure Michigan doesn’t do enough to lift queer businesses and that areas of the state are too conservative to fully embrace LGBTQ+ communities.

“[One listed store has] nothing to do with the queer community,” Hilt said. “They’re nice people, but they don’t even throw in a gay candy bar in June and try to profit off of it. Is there anything queer in Sleeping Bears Dunes? That article is obviously written by somebody who was told to write an article. That article stood out to me as kind of a joke. I’m not trying to get a pump for my business, but if you asked anyone in this region where to get Pride flags, either they don’t know or they come to us.”

“Is there anything queer in Sleeping Bears Dunes? That article is obviously written by somebody who was told to write an article.”

Still, Lorenz believes in Michigan’s diversity. He even said he’d wager that Michigan is among the most diverse states in the country in terms of “people and places,” but that Michiganders tend to live in pockets. He noted that assumptions hold back travelers and locals alike, like assuming Saugatuck is the only LGBTQ+ destination in the state, and that “if we’re ever going to break through to be truly welcoming in every way, we need to put those assumptions aside to take a chance to maybe be disappointed, but maybe be filled with joy because we have been welcomed.”

About the Author: John Besche

John Besche is a DC-based writer who reports on religion, urbanism, the confluence of the two and a little bit of everything in between. Follow him on Twitter @JohnBesche.