‘It’s Not an Island Paradise for Everyone’: Maurice Tomlinson Is Fighting an Uphill Battle Against Homophobia in Jamaica

Tomlinson will be the keynote speaker for the 'Forget Columbus Day Awards' fundraiser on Oct. 16

When Maurice Tomlinson married his husband, Tom Decker, in 2011, he did not plan on saying goodbye to his home country of Jamaica. He certainly didn’t expect Jamaica to say goodbye to him. But that’s exactly what happened.

Tomlinson wasn’t out in Jamaica, a country considered by some as one of the most homophobic in the world — that is, he wasn’t out in his native land until he was outed. When he returned to the island after his wedding in Canada to complete the filing process for Canadian residency, he found that a photo of his wedding had been published in a Jamaican newspaper.

“I got a lot of death threats, and I had to get out of Jamaica,” Tomlinson tells Pride Source via telephone from his home in Kingston, Ontario.

“I didn’t stay away, because I realized if I did, I’d let the bullies win,” he says. But going back required a “very strict security protocol.”

Keep in mind, Tomlinson is one of the lucky ones.

“I realized something very important,” he says. “There is a power in visibility. People fear what or who they don’t know.”

And fear of LGBTQ+ people is high in Jamaica. “Because the church has gotten away with preaching all this nonsense,” he says, including spreading hateful lies about the gay community. In the eyes of the church community in Jamaica, gays are pedophiles who spread AIDS. Combating these stereotypes is crucial. “Without it, we will never ever achieve any kind of liberty or equality because we will always be feared,” he says.

And so, Tomlinson has become a leading figure in LGBTQ+ activism in Jamaica. 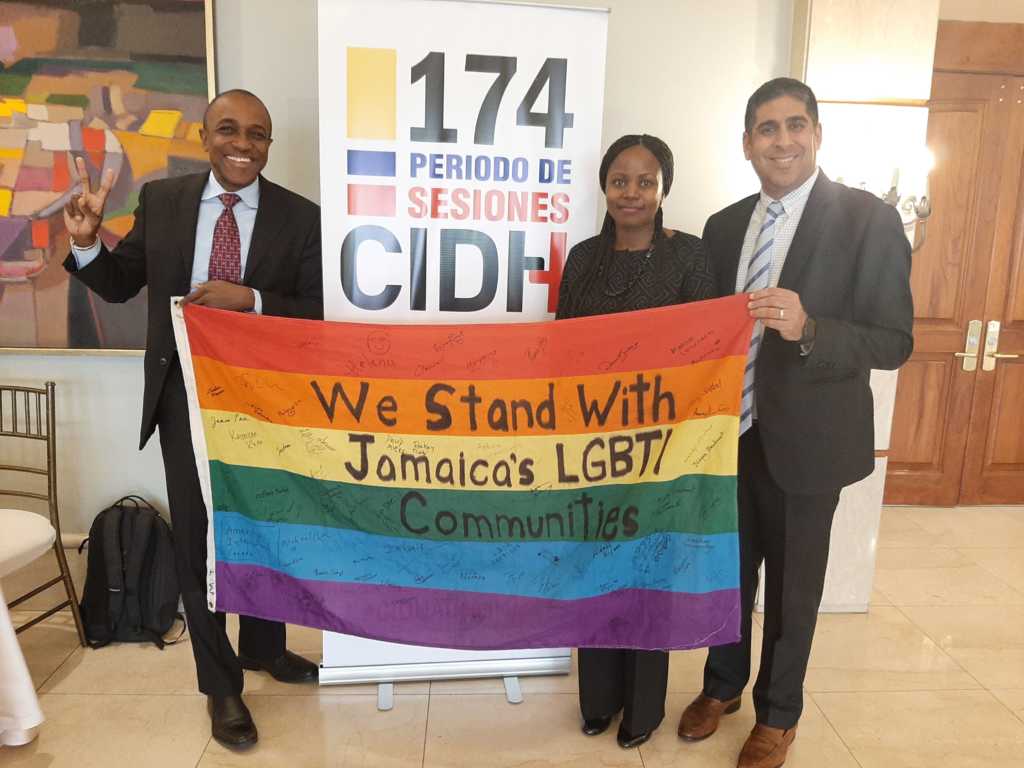 “If people don’t see who this hate is directed against, then it’s easy for them to buy the rhetoric,” Tomlinson says. “It was important for me because I had the privilege of leaving if there was violence,” unlike many in Jamaica.

“I’m not naive enough to think I will always escape,” he admits. “I know that my safety is not guaranteed. I also know that with any kind of liberation movement you have to take calculated risks.”

Those risks are necessary even when the stakes are high. That’s why Tomlinson is involved in lawsuits challenging anti-LGBTQ+ laws in the Caribbean and is fighting to have his marriage recognized by the Jamaican government so he can return with his husband without all of their civil rights being stripped away from them.

“If I didn’t attempt to make a change, then I would have to live with the Jamaica that I inherited,” he says. “I have to try and change it, or I have no reason to complain; I just have to accept it, and I can’t accept it.”

One of the reasons Tomlinson would like to return is family. “My mother died earlier this year in March, and my father is alone now,” he says.

His mother’s death was hard on the family — the ingrained homophobia in Jamaican culture made everything worse.

“One minister actually told my mother while she was sick and dying that she wasn’t being cured because she wouldn’t disown me,” Tomlinson says. Even though his mother had been “a pillar of the church” for more than 50 years, the church initially balked at holding her service there. All because her son is gay.

This has been hard on Tomlinson’s father, for whom the church used to be a strong support. “He’s pretty much disassociated with the church,” he says. “He doesn’t like people around him because he doesn’t trust them any more.”

This isolation coupled with his father’s chronic diabetes worries Tomlinson a great deal.

“That’s another reason I want to go back, but I want to be able to take my husband with me. Because if anything were to happen to me on the island,” he says, “my husband is a legal stranger.” Considering his history of receiving death threats, that’s not a risk he wants to take.

Tomlinson says one of the greatest myths about Jamaica is that it’s an island paradise for everyone, an idea perpetuated by tourists who visit and only see a small part of the island.

“‘I’ve been to Jamaica and it looks fine, it’s safe,’” Tomlinson hears people say. “No, you’ve been to a resort. You stay behind a huge wall for seven days eating and drinking to your heart’s content.”

Compared to the island as a whole, “That resort could be on Mars.”

He says employees in the resorts receive extensive sensitivity training. “There’s an expectation that LGBT tourists are more tolerated because they’re foreign,” he says. LGBTQ+ locals, however, are not accepted.

“I get irritated when I hear gay tourists rave about how wonderful their experience was and they didn’t have a problem. That’s your privilege speaking,” he says. “They have the perception that the Caribbean is tranquil and there’s nothing bad going on because there was nothing bad going on in their resort. That is so far from the truth.”

There are two realities for LGBTQ+ people in Jamaica, he says. “If you have resources, money and privilege, you can insulate yourself from violence” by, say, living in a gated community.

“Even if you do have resources, if you’re in the wrong place at the wrong time, you can be vulnerable,” Tomlinson says. “Your privilege only goes so far — once you are outside of that bubble you are reviled.”

“Then there’s the reality of people without resources,” he says, for whom no such bubble exists. “These persons are very vulnerable.”

While many countries have become more accepting of LGBTQ+ people over the past several years, Jamaica has unique challenges, including its geography.

“I think the best way to explain to people why it’s so challenging is that in the Caribbean, many of the smallest islands are like the smallest towns [but] surrounded by moats,” he says.

“It’s hard to get ideas in or out,” he explains. “There’s a movement of ideas and people that doesn’t happen in the Caribbean.” He points to cultural shifts due to TV shows like “Will & Grace” in other parts of the world. In the Caribbean, TV stations “self-censor,” claiming that since same-sex intimacy is illegal, they can’t, and won’t, promote it.

On Oct. 16, Tomlinson will be the keynote speaker for the fourth annual Caribbean Community Service Center’s “Forget Columbus Day Awards,” a fundraiser for projects and programs that “support, empower and advocate for Caribbean Nationals in the Americas.” The event is at 7 p.m. at Kola Restaurant & Ultra Lounge in Farmington Hills.

“Columbus has been mischaracterized as discovering America, but he didn’t,” Tomlinson says. “People were there before, and his arrival wasn’t a boon for the original residents; it actually led to genocide.”

He explains that this is similar to how European colonizers wreaked havoc in places like Jamaica. “They left legacies like anti-sodomy laws and homophobia,” he says, which is still being exported today. “In Jamaica, we’ve seen quite a few American, British and Canadian evangelicals coming to the country to preach homophobic hate that they cannot preach in their own countries.”

These “missionaries” have spawned a perpetual hate that helps to fuel the undercurrent of homophobia running through Jamaica. “They are a primary reason why we still have these homophobic laws. Because they are seen to come from the enlightened North,” he explains. “The law on the books in Jamaica is still a colonial law that says you go to jail for 10 years for any kind of homosexual intimacy.”

His keynote address will touch on these issues.

“What I want to draw people’s attention to is the fact that, just like Columbus, there is still a lot of harm being done by colonizers and we need to deal with the modern-day consequences of that,” he says, “and stop the export of homophobia from the Global North, particularly the United States.”

He advises people to be careful about what organizations they support. “Where is your missionary money going?” he asks. “Modern-day missionaries are keeping laws on the books that drive people underground.”

Young people are hit especially hard. “We have homeless LGBT youth as young as 10 years old that are being kicked out of their homes,” he says. “You have kids now living in sewers, selling sex to survive.”

Homophobia is also a public health issue. “People need to make the connection between the export of homophobia from the Global North and rates of HIV in the Caribbean,” he says, adding that the stigma against homosexuality drives men away from HIV prevention in a place where HIV rates are among the highest in the world. “This HIV pandemic is not going to end until we end homophobia.”

“I really want to drive home that the pandemic in the Caribbean of HIV is a direct result of something exported from the United States: your toxic religious homophobia. And you need to stop it,” he says. “This is some of the harm. People need to think what kind of modern-day neo-colonial harm is happening in the Global South by these new Columbuses that wash up on the shore.”