Jinkx Monsoon and BenDeLaCreme Talk Holiday Tour, Male Nudity at the Show and Which Duos They’d Be For Snatch Game

No, Jinkx Monsoon and BenDeLaCreme aren’t roommates. But the “RuPaul’s Drag Race” alums get that you might think so. After all, during our recent Zoom call, they were sharing a physical space.

“We’re just together right now,” DeLa says, before kidding that “every time we’re getting ready for the holiday show, I kidnap Jinkx and hold her captive in my basement until the show is done. That’s our writing process.”

What does Jinkx have to say about all this? “I develop Stockholm Syndrome,” she says, “and have to be deprogrammed.” She adds that this is “how we create the illusion of sisterhood and togetherness on stage.”

Just the opposite is true, of course. There’s no illusion. Or basement. (We think.)

Instead, these two are drag sisters through and through, even if they love to feign the dramatic frenemy tension that makes, for example, their holiday shows an irresistibly catty treat. Though last year the pandemic got in the way of their live show — instead, they made the movie “The Jinkx & DeLa Holiday Special” — they’re back on the road again this year for “The Jinkx & DeLa Holiday Show.” They’ll make a stop in Detroit at The Majestic Theatre on Dec. 10.

I hope that you’re getting fed in that basement, Jinkx.

Jinkx Monsoon: Yeah. I gotta say one thing: As a producer, DeLa makes sure I am fed and fed well.

BenDeLaCreme: Foie gras goose. Just a straw down the gullet, and just pile it in. Gotta keep my little cash cow goin’.

How do you plan on topping “The Jinkx & DeLa Holiday Special”?

DeLa: Topping! Get it?

Jinkx: Yeah, we’re gonna top it consensually and with plenty of lube. Every year we have to ask ourselves: How are we gonna top last year’s show? And it just so happens that last year’s show was a film, so it’s a whole new list of obstacles and questions we must answer. But I think we’ll attack it the same way we do every year, which is to focus on: What is the message we want to send this year, specifically? What are the shared experiences our audiences can relate to this year? And how are we going to examine those themes and tropes and queries in a new and exciting way that no one’s ever done before. So just that.

DeLa: And fortunately, it seems to be a bottomless well of, um, topping jokes.

I would expect nothing less. Is there anything related to COVID-19?

DeLa: Of course. We’re in this rare moment where we’ve been through this collective trauma and now we’re going through this collective sort of joy that is also a trauma of beginning to reenter, so I think that it would be impossible for us not to address that. Our thesis is always about really trying to hold all the complexities of how joyous and how difficult the holiday season can be, and this year there’s just a lot of layers on top of that.

Jinkx: I’m very much someone who takes what happens in my life, I form a story around it, and just tell you stories from my life. Whereas DeLa takes experiences from her life and then pushes it through a whole Play-Doh factory of synthesis and artifice and stylization. Our writing style together has become a marriage of those two ways of going about it. This year, because of the extenuating circumstances of the last two years, I think we’re leaning more into reality than in the past, but still maintaining that stylized [sense of] “How do we comment on reality [as] fictional drag queens?”

DeLa: The characters have been through everything that we collectively have been through, but we’re always gonna abstract it by having it be like a talking peppermint that’s gonna help us resolve our feelings, you know?

DeLa: Because people wanna feel seen in their experience, but they also want a break, right? We need to experience some joy right now. So our hope is to bring all of those things.

Jinkx: Yeah. Live vicariously through us as we process trauma in an entertaining way. [Laughs.] You get drunk and sit back, and we’ll do the work.

You had a naked man in the TV special. Will you bring a naked man with you on stage for the live show?

DeLa: If only the Delta baggage limit would allow for a carry-on that heavy.

I’m sure you can find a man in every town willing to get naked.

Jinkx: We’ll put it in our rider.

DeLa: You know what? Shockingly, the man in each town you haven’t met that’s willing to get on stage naked is generally not the person you want on stage with you.

Jinkx: [Laughs.] I mean, if I had it my way, there’d be full-frontal nudity in everything that I do, but that’s just a perfect example of certain things you can pull off in a movie that you can’t necessarily do on stage.

DeLa: All right, I’m getting the hint. I will be fully nude for this entire tour.

What are you most looking forward to when it comes to getting back on the road and being in front of a live audience?

Jinkx: Uh, how do I say all of it without it sounding like a cop-out answer?

DeLa: But it’s the actual answer. I mean, the actual relationship with the audience, the live energetic exchange, the exchange that we get to have with each other as like a threeway with the audience [laughs], for lack of a better way to speak about it. But I mean, I’m even looking forward to the stuff that usually is the hardest stuff. I’m looking forward to, you know, trying to sleep on an airplane unsuccessfully and then going straight to tech and having to do a show again. I just… I can’t wait to live life as a performer again.

Jinkx: Yeah, honestly, if I could take my cat on tour with us then I’d have it all. Oh, and my husband. [Laughs.]

Is there something about Christmas that gives you a different kind of permission to be completely outrageous?

DeLa: I mean, we’ve never needed much permission. But what I do think is that generally it gives a lot of other people permission, which is why I think it’s such a successful marriage between drag and the holidays: because it’s a time of year where I think so many people indulge in that kind of excess.

Jinkx: Yes! Straight people have three points in the year to dress up like us. They have Halloween, Christmas and the Kentucky Derby, for some reason. [Laughs.] 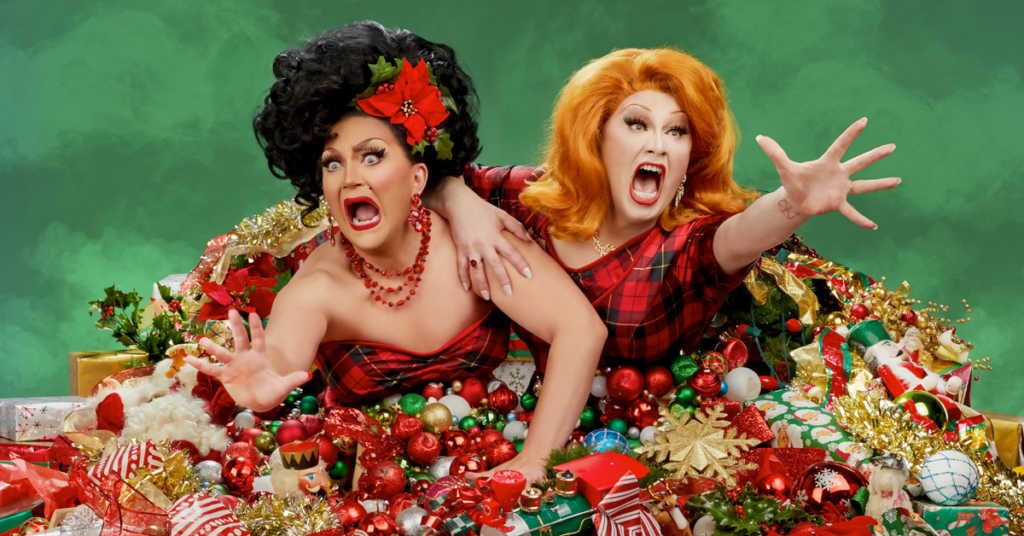 What part of getting into drag really makes you feel the Christmas fantasy?

DeLa: You know, I love being in drag much more than I enjoy getting into drag at this stage of my career. [Laughs.]

Jinkx: Yeah, if I had a button that I could just push that would put me into drag immediately, I’d give almost anything for that.

DeLa: That Judy Jetson helmet from the opening credits of “The Jetsons” that she just puts on, and then she’s gorgeous.

Jinkx: But I think it’s all gonna feel new again, now that I’m reentering the world like a hairless, pink little baby. [Laughs.]

The last live show in 2019 was called “All I Want for Christmas Is Attention.” What’s all you both want this year?

DeLa: Attention. [Laughs.] Turns out that I spoke too soon. I need it more now.

Jinkx: Yeah, with a heavy side of validation. And if there’s time, the dismantling of the patriarchy.

DeLa: Yes, the fall of capitalism and also for people to collectively take Covid safety and vaccines seriously enough for us to be able to go on tour without the constant fear that the rug could be pulled out at any moment. [Laughs.]

Jinkx: Yeah. It feels like Michael Myers is stalking slowly behind us.

DeLa: But at least six feet away at all times.

Besides each other of course, who is your favorite queen that does something totally different from what you do?

DeLa: I guess I was picturing that I had to think of something that was a far cry from what I do. I mean, they’re definitely different from you, but there’s definitely a world of theatricality within that. I would say there’s a lot of drag queens who have really inspired me over the years. This performer doesn’t even really identify as a drag queen, but Dina Martina, who is also a storyteller and theatrical chanteuse, is one of the most brilliant performers out there.

If both of you returned to “RuPaul’s Drag Race” and did “Snatch Game” as a duo, which legendary iconic duo would you be?

Jinkx: The answer that’s right in front of us would be Ren and Stimpy.

DeLa: I don’t know that it’s the most interesting choice but Lucy and Ethel feel like maybe the most obvious choice. I would be really into doing Laurel and Hardy just because I’d like to see us in those looks.

Getting back to the holidays, what’s a holiday tradition that you wish would just die?

DeLa: I think we’ve killed most of the ones we don’t like already, but let’s see. I have to think back. I will say I do not enjoy gift giving. I like gift giving as a general practice, but at the holidays it seems transactional. Like, I wanna give a gift because I found a thing, and it made me think of somebody. In my family growing up, it was all very much like, “Here is this gift, but what do I get in return?” So that’s not something I enjoy. I prefer the experiences and the togetherness.

Jinkx: I’m trying really hard to think, and I just can’t. Like there’s plenty of traditions that I’m like, “What’s that all about?” But then there’s always a way to make ’em fun.

DeLa: What about going to church in the middle of the night? I wanna let go of that one.

DeLa: What Jinkx would do away with is Christmas.

Jinkx: [Laughs.] Yeah, I’d take us back to solstice, you know. Take us all the way back. You know, people are talking about how we go back to those old-timey Christmases of yore. I’m like, go all the way back.