Jonathan Van Ness Talks New Netflix Show, Inspiring LGBTQ+ Youth and Newfound ‘Sense of Ease’ in Who They Are

Before I talk to Jonathan Van Ness about their new Netflix show, “Getting Curious with Jonathan Van Ness,” they take me on a little on-camera adventure that involves them “needing cuter light.”
They do a 180 with the computer. They swivel in their chair. “I need more natural light in my life, I’m sorry,” they say, still shifting and “getting comfortable.”
And then once they find that magical spot where the light hits their face in just the right place, the 34-year-old “Queer Eye” grooming expert grooms their computer, gently wiping the lens with a tissue. If you’re going to wear what they’re wearing — it appears to be a chiffon kaftan — you don’t want a dusty ol’ lens muddying its bright pink radiance, honey.
“I did an outfit change for you,” they say, having slipped into their new, flowier ensemble just before our interview.
Van Ness, who is also a children’s book author and one of just a few openly nonbinary public figures, rocks an entire closet of gender-nonconforming fashion on Season 6 of “Queer Eye,” which hit Netflix on New Year’s Eve 2021. On their new six-episode series, a TV adaptation of their podcast “Getting Curious with Jonathan Van Ness,” the multi-hyphenate even has an entire episode devoted to gender identity.
Featured in the episode, titled “Can We Say Bye-Bye to the Binary?,” are gender nonconforming activist Alok Vaid-Menon and Geo Neptune, the first two-spirit elected official in the state of Maine. With Van Ness, who says they hadn’t even heard the term nonbinary until the age of 30, Vaid-Menon and Neptune explore what their identity means to them and the history of our rigid gender binary. The show also intends to open up minds on other topics as well, such as why bugs aren’t so bad, figure skating’s minority barriers and, naturally, an entire episode on the history of coifs called “Why Is Hair So Major?”
All aglow through a freshly cleaned computer camera, Van Ness spoke to me about the “sense of ease” they feel now, a dream “Getting Curious” guest star they’re not sure they could form words around, and their very personal reason for being completely theirself around young queer people.

I watched a lot of “Getting Curious” yesterday and wanted to thank you for modeling curiosity, first of all. I think as adults we tend to lose our imagination and we just accept some things for the way that they are. Is that what you felt going into the show?

Well, I started “Getting Curious,” the podcast, in 2015. I’ve always been someone who loves to learn, and I’m just a very curious person. And I clearly love talking. So the idea — wanting to understand the world around me better — has been something that’s existed within me for as long as I can remember. So that was definitely something that I wanted the opportunity to break down on the Netflix stage ’cause it’s a very big stage.

And I wanted to bring a more visual, multi-medium, multifaceted world in which the podcast — but as a TV show — could live. So I’m just really excited that we got the opportunity and that Netflix believed in me enough and that we can go explore the world together. So I’m just really excited that I have the opportunity and I hope everyone loves it. 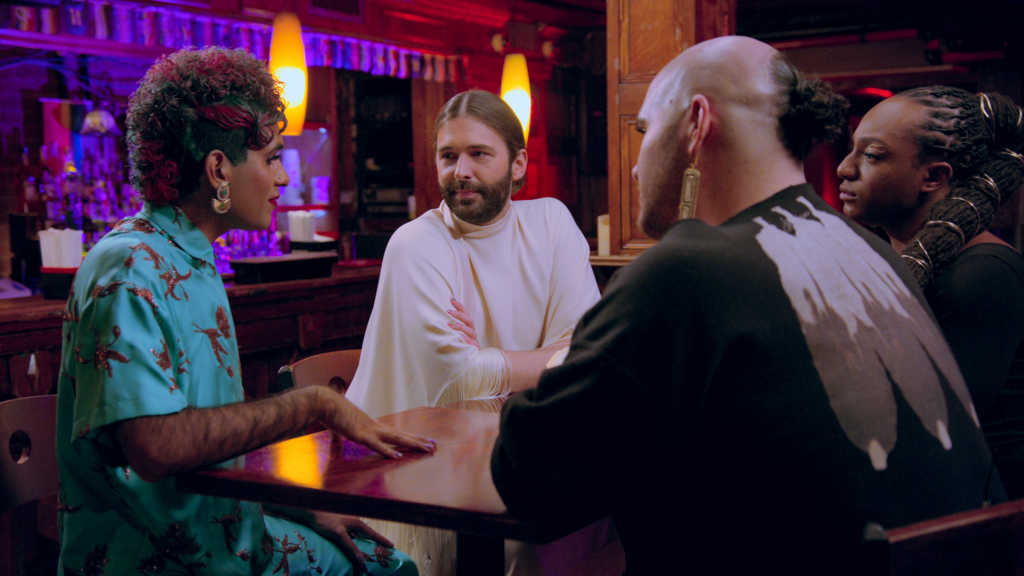 You mention Netflix being a big stage, which it is. Is that why you were like, “You know what? We are gonna do an entire episode devoted to nonbinary people and gender nonconforming people?”

Yeah. Being someone who is nonbinary is something that I think I’ve been my entire life. I only had language for it in these last few years. But the amount of trans misogyny that I’ve had to endure and live through in my own life pales in comparison to some of the trans misogyny that other people have had to go through within our community and within our trans community, specifically.

And I wanted to show people that we are human and we are all sorts of different things that are not threatening, and actually very beautiful and amazing and are just as natural as the grass or rain. You know, we’ve been here forever. And I was really excited to get an opportunity to share that information.

There aren’t a lot of nonbinary public figures in the world, and you seem to be aware of that as you’ve been using your platform to really educate people.

Absolutely. I think that for me, being someone who was very mercilessly bullied all throughout my childhood and formative educational years, I’ve always been very moved by this thought of, “If I could make it easier for other people like me or put a little bit of an end to other people’s suffering, it would make my suffering more worth it.” And so I’ve always liked the idea of using what I’ve learned to help make other people’s lives easier.

I love that you said that because my colleague, whose queer son loves you, wanted to know how you feel when it’s a kid who looks to you as a huge inspiration as they’re navigating their own gender and identity.

That’s a really good question. I think sometimes when I see much younger children, like in my standup comedy show, I just feel immediately guilty. I’m like, “Oh my god. I hope I don’t traumatize them, honey, ’cause we are going there tonight.” So in that sense, it can be a little bit harder, but so often I think about Margaret Cho when I think about how I want to live my life as a public figure. I was introduced to her work at a very young age. I was maybe 10 or 11 when I first saw one of her specials on Comedy Central. And she did not hold back. She was herself. She is herself. She’s a full-bodied version of herself. And look at how I turned out. I’m fine.

So I just feel like I wanna be myself. I don’t wanna totally limit my art or my creativity thinking about, like, “Oh my gosh, is this gonna be too much for someone?” I feel honored that people of any age would look to me and find more self-love, more self-acceptance, more comedy, more joy. More curiosity. So I think I wanna think about that because if I think about, like, “Oh my gosh, I’m a role model for a lot of young people,” and even just success in general, if I thought about it too much, I would become really full of anxiety and unsure of what to do. And so I think in order for me to stay connected to myself and my own vision, I have to not think too much about the way that it’s gonna be received.

Do you have moments in your mind where you’re like, “What would this have meant to little Jonathan growing up in Quincy, Illinois?”

Very much. And sometimes that’s actually another one of those feelings where sometimes I think if I felt that feeling all the way, I know I’d just be in a corner crying because I can’t believe that I’ve been able to do this with my life. But I do hope that other young people seeing me achieve what I’ve been able to achieve in my career won’t find it so shocking when they achieve their dreams. Because for me growing up, I felt like it was unheard of. I didn’t think that I was ever gonna see someone like me be so successful and beloved and accepted and able to create their own projects. It really is such an honor. And I want other people, especially young people, to look at me and think that they can do it too. 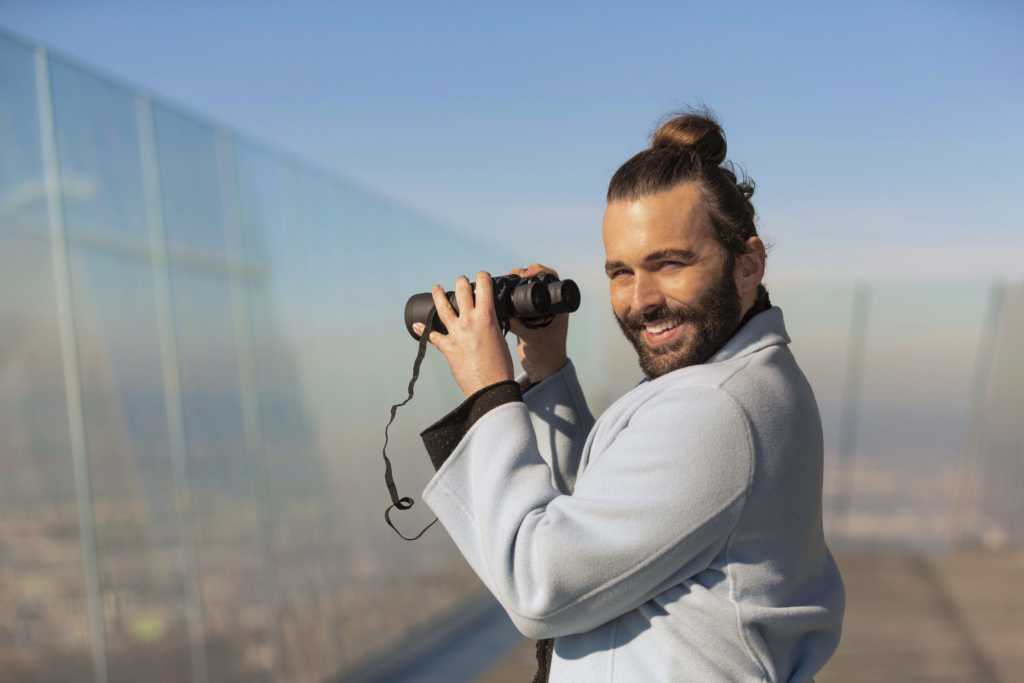 Is this your first season on “Queer Eye” identifying openly as nonbinary?

I came out about being nonbinary in 2019, before we filmed Season 5, but I don’t know if me talking about it in that season made it to air.

I wondered because you are fully yourself this season in a way that I hadn’t really seen before. You’re really embodying your whole self, even down to the fashion. Did you feel differently this season?

Yeah. I think it’s just been such a fast four years, you know? From shooting Season 1 and 2 in Atlanta in 2017, which is when we actually shot that, and then Season 3 and 4, which we shot in 2018, really soon after the show had come out. Season 1 and 2 we shot together. Season 3 and 4, together. And then 5 was its own thing. And then 6 was its own thing. And so each one of those chunks I feel like I was in just a wholly different life situation every single time. Just neck-spraining differences in life situations. So I do think that the season between being married and … definitely this was the first season where I was public about my HIV status. Just very public in all of the things. And so I think that that maybe did lead to just a more overall sense of ease.

In “Getting Curious,” you’ve got some great guest stars, including Rachel Dratch, Lea DeLaria and Michelle Kwan. Who is on your dream guest star list for potential future episodes of the show?

I mean, once you do have Michelle Kwan, I don’t know where else you’re gonna go from there. I kind of started with the most major one ever! But I mean, I feel like… is Adele ever available? Beyoncé? Michelle Obama, honey? Like, I’m shooting for the stars, but I don’t know. Who knows?

Oh my god, Oprah. Aaah! I don’t know if I could even have Oprah ’cause I think I would literally do that for the whole 22 minutes. Aah! Aaah!

The title of that episode: “Can Jonathan Form Words Around Oprah?”