There's power in coming out as a pro athlete, says Johnson

“Wimbledon puts me in a great mood.”

This is the first thing Lendale Johnson tells Pride Source after “hello” during a phone interview. He is watching the championship and rooting for Novak Djokovic.

Still, it’s also fair to say that Johnson is cheering on the sport as a whole. “In the tournament, I really want to see everyone just do well,” he says.

You could say that Johnson, who grew up in Kalamazoo but now lives in Brooklyn, is a multidimensional tennis fan. He loves the game not only as a spectator but also from a business perspective as the owner of The Johnson High Performance Tennis Academy in Brooklyn and as a professional player on the men’s ITF circuit.

Johnson is also the first Black male tennis player to come out as gay. 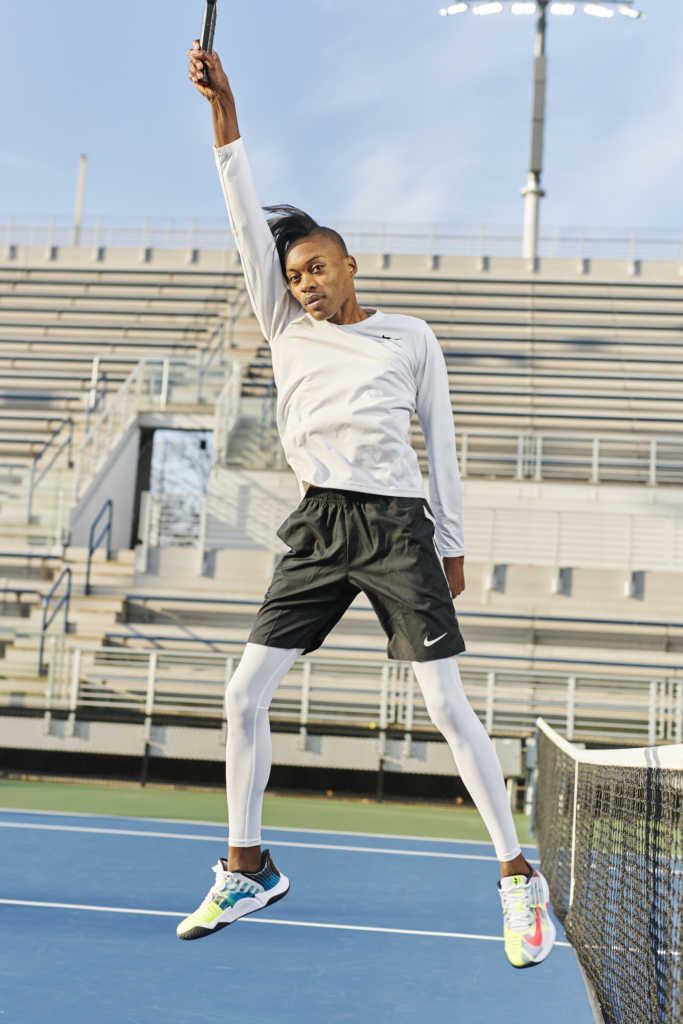 “People need to come out, especially in sports,” Johnson says, adding that the world of sports has the power to change the larger world and that coming out is a way of holding himself accountable. “Visibility is invaluable.”

Not only are there not a lot of out male players in tennis, but tennis also has a reputation as a “white sport” with “a lot of homophobia,” Johnson says.

“With me being a double minority, it’s even more powerful,” he says. “It’s given me more inspiration and more motivation to play and do even better. If I hadn’t come out, I wouldn’t have all this support of people rooting for me and getting all these sponsors and investors.”

That’s not to say coming out has always been a positive experience.

“I’ve created a target for positive and negative things,” he says. Not only does he have to deal with “the homophobia that’s very prevalent in the world,” but also, “being a Black athlete in this sport, you’re still going to get people who don’t want me to be on the court,” he says. “People aren’t going to say that outright, but I’m sure it’s there.”

Thankfully, he has some high-profile well-wishers, including tennis legend and lesbian icon Billie Jean King.

On both Instagram and Twitter, King wrote, “So proud of you and all you’ve accomplished. Keep inspiring others, and keep going for it.”

It means a lot to him. “I can’t even explain. I almost cried,” he says. “She really, really sees me, and she hears me, and she’s supporting me.”

King’s encouragement is something Johnson will draw strength from “for the rest of my life,” he says. “If I have a bad day in the office or I’m doubting myself, Billie Jean King is in my ear, and she always will be.”

He also heard from Venus Williams. “Makes me feel very proud of myself,” he says. “I just want to keep making everyone proud and keep going for it.”

While Johnson is currently focused on his tennis career, he’s a model and an actor set to star in Amazon Prime’s upcoming reality show “Deuces And Love.” The show will follow Johnson around Hollywood as he takes on issues like racism and problems in the world of professional tennis, his career and his love life.

Johnson has come a long way from his days as a kid growing up in a religious family in Kalamazoo, where he says that despite feeling sheltered, he experienced white supremacy, discrimination, and homophobia.

“At that age, you don’t really know what those things are,” he says. “I felt at a young age that I wasn’t being treated like everyone else.”

He got through it, he says, by being “a strong-willed kid.”

“I grew up in a predominately white school. There weren’t any Black people in that school at all, let alone being gay as well,” he says. “I got made fun of and bullied in middle school.”

High school wasn’t any easier. “Back in high school, I had really long hair, a really feminine voice,” he says.

He acknowledges that his experience was, unfortunately, not unusual. “High school is really a jungle, and you have to deal with what’s in your face.”

He recalls one encounter at school that led to his suspension during his senior year at Portage Northern. During final exams in his math class, a white teacher kept misgendering Johnson, even after being corrected by other students.

“I finally just had it, and I ended up saying some profanity to her, and I had to leave the classroom and leave the building,” he recalls. “When my parents found out, they weren’t even upset about it because they understood what happened.”

Many of his classmates, however, were surprised to witness the eruption. “It’s funny because I’m so soft-spoken,” he says.

Johnson had been misgendered before in school, and he recalls that some students stood up for him, including one who yelled at someone disrespecting him. “She got removed from class for trying to protect me,” he says. “A really popular student supporting you really changes the dynamics of the entire classroom. Kudos to those popular students for having my back.”

He has since heard from some of those very same people who treated him badly. “Most of them just reach out and apologize and just praise me for my success,” he says.

Johnson came out right after high school. “My mom was doing my hair. She slapped me in the face when I told her I was gay, and I ran away from home.”

Looking back, Johnson understands where she was coming from. “She clearly wasn’t happy with it,” he says. “And I feel like that was her way of being a Black mother to try to protect me: ‘You can’t be like that, the world is going to be harder for you if you’re like that.’ She didn’t say that out of her mouth, [though].” 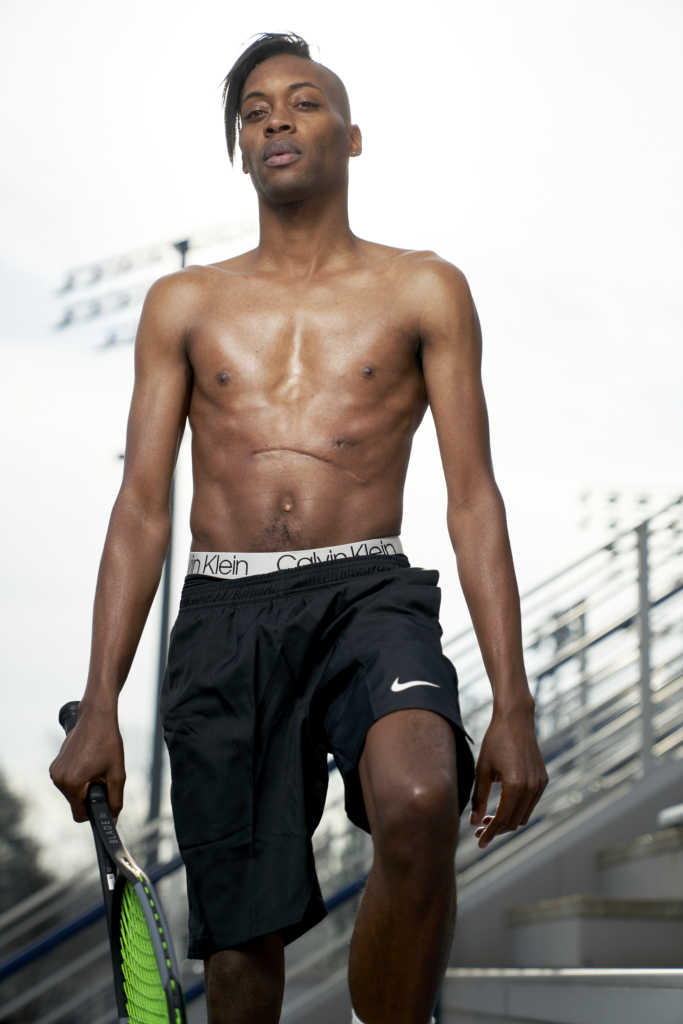 Growing up in this environment was hard for him. “My mom had tried to pray and asked the pastors for a prayer for me about my homosexuality,” he says.

Things are much different now. Johnson’s ex-boyfriend did his mother’s hair for his cousin’s wedding that they all attended together.

“It took her time to adjust,” he says, but she is accepting now.

“She’s just so religious, you know,” he says. “She believes in the Bible, and she believes homosexuals will, I guess, go to hell. But she’s had a change of heart, and I think now, it’s more about how God, I guess, looks at your heart at the end of the day, and I think that helped her get over the whole gay son thing.”

Johnson hopes more closeted athletes will come out, noting that it is bad for the mental health of LGBTQ+ athletes to do otherwise.

“I don’t think it’s good for the players mentally, at all, to not be out,” he says. “Every person is their own person, and we don’t know everyone’s exact reasons why they’re in the closet.”

Coming out today is much different than, say, when Billie Jean King was at the beginning of her career.

“Things are just getting better and better,” he says. “The future is bright, but we’re still fighting.”

Coming out has only helped his career, Johnson believes. “I feel very honestly it gives me more power.”

“There’s a lot of power in my racket now, and I have to realize that and stand and deliver,” he says.

To “stand and deliver” in tennis means that “your back is against the wall, a very difficult shot is coming right at you, and you take the shot, and you become victorious,” he explains. “I am standing and delivering now.”