Disabled people are sexual beings. Unfortunately, this fact is rarely depicted in the media or even something most able-bodied people consider.

Photographer and Yale MFA graduate Robert Andy Coombs seeks to change that with his work. The quadriplegic artist takes self portraits in a variety of vulnerable, sexual and intense situations.

A collection of his work, titled “Notions of Care,” is on exhibit at the Patricia & Phillip Frost Art Museum at Florida International University. The intimate photos depict Coombs with other men. Some photos are sexual, some sensual. As a whole, they depict the tenderness and intimacy of caretaking.

“Caregiving became a huge topic in my work [while at Yale] because I need pre-care and post-care when it comes to sex,” Coombs tells Pride Source via Zoom. “I like incorporating care into foreplay and postplay.”

Coombs explains that he needs to be undressed and redressed and also needs help with any post-sex bathing needed. “People think that…if someone’s caring for you that you’re going to lose your dignity or independence,” he says. “And it shouldn’t be thought of like that.” 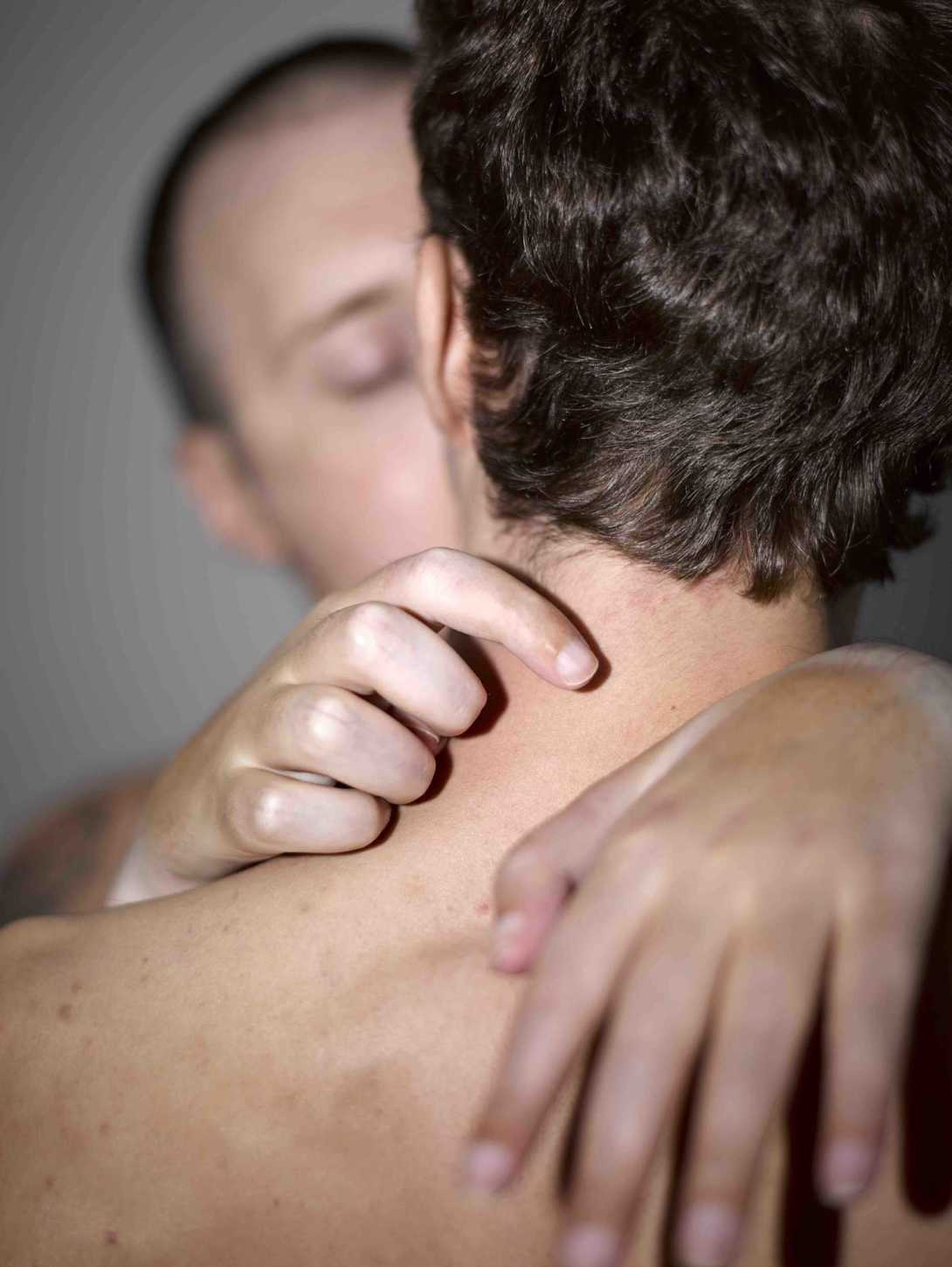 Coombs wants to make care sexy. “When I’m getting washed up by a partner, we do it naked, so that it’s fun,” he says. “We kind of joke and, like, they’ll bend over me to wash a part of my body so their ass is in my face or their dick is in my face. It’s fun. It’s sexy.”

As a result, “intimacy and care became such a huge topic” of his work. “I think that’s what [Frost chief curator] Amy [Galpin] was really going for with this show,” Coombs says.

“In sharing details of his personal life, Robert Andy Coombs brings needed perspective to contemporary art and to our popular consciousness,” Galpin says in a press release announcing the exhibition. “These photographs offer an extraordinary opportunity to rethink the notion of care.”

Frost Museum Director Jordana Pomeroy concurs, adding, “Coombs’ work paints a picture about different narratives of love, which he tells boldly and tenderly. This exemplifies great photography—art that pushes, pulls, and inspires deep thought and dialogue, which is why we chose to feature him at the Frost Art Museum.”

Coombs found his way into his subject matter following a gymnastics training accident at age 21 while he was an undergrad student in Grand Rapids. He was training to do a double backflip on a trampoline. “I fell, like, 10 feet out of the air on the back of my neck,” he says. “And that’s where I sustained a spinal cord injury.”

Coombs explains that his is a C4/C5 injury. “It’s a pretty high injury and I’m complete,” he says. “I fucked it up pretty bad.”

He adds that every spinal cord injury is different, leaving those injured with varying levels of ability.

“Some people with my level of injury are up walking or in a manual wheelchair,” Coombs says. “I can move my arms a little bit to scratch my nose or use my phone a little bit, pet my dog, but that’s about it.”

After his accident. Coombs spent about a month in the ICU on a ventilator and then a year in recovery.

“After I got off the ventilator, I went to University of Michigan for about 6 weeks for rehab to learn how to take care of myself and try and get as much function back as possible,” he says. Afterwards, he went to live with his parents at their home in Michigan’s Upper Peninsula.

Coombs grew up in the U.P.  “I lived in the middle of nowhere growing up,” he says. “It was like one of the most idyllic childhoods you could have, running around in the woods and not having to worry about anything.”

But like most young people in their 20s, Coombs wanted his independence. He prepared to go back to school at the Kendall College of Art and Design in Grand Rapids in the fall and was able to do so with the help of hired caregivers, friends and roommates. “It takes a village. I am thankful that I’m able to surround myself with amazing friends and family to help me out.”

There was one area where he did not receive help, however.

“For rehab, we had our independent living classes where we would learn about our disability [and] how to take care of ourselves,” he remembers. “There was one class on sexuality and at this point I hadn’t even thought about that.”

Coombs had a lot of questions. “We kind of discussed that our brain was our biggest sex organ, but when it came to my questions about actual sex,” he says, “they were super uncomfortable about it and they were like, ‘Here, you can watch this VHS tape from the ’80s or ’90s about sex with your partner.’”

Not only was the video heteronormative, it was not particularly instructive.

“I was asking my therapist, ‘How does penetrative sex work? Am I going to be able to maintain an erection to have sex with someone?’” he says. “I also asked if I could be penetrated. Could I bottom? Because I like both.”

Unfortunately, he says, “They completely blew me off.” 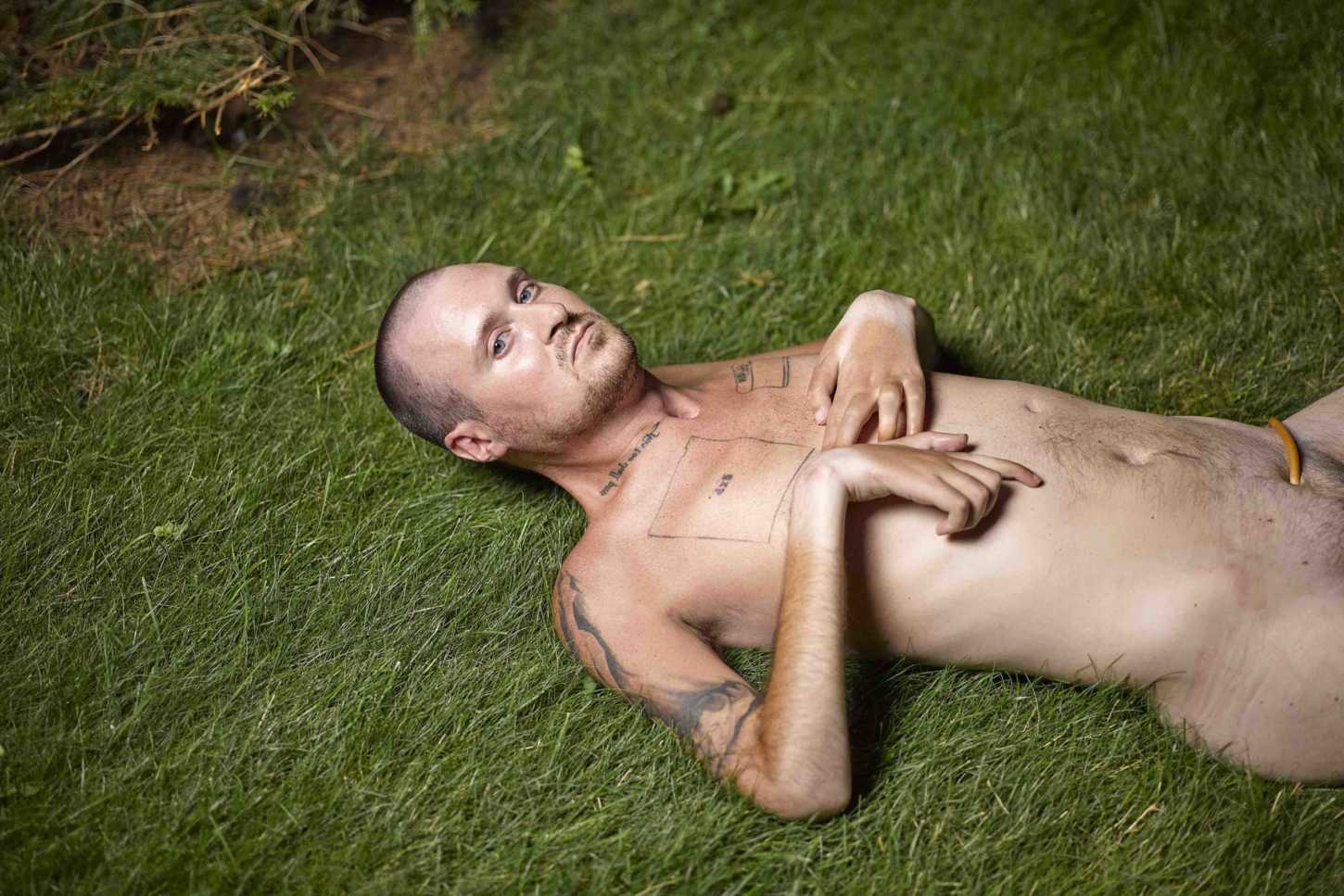 “I reached out to a few of those men, and they gave me good advice and different things that they use to achieve an orgasm,” he says. “I realized there was like no representation of disability in sex, especially when it came to the gay community.”

After he graduated in 2013 from the Kendall College of Art and Design he didn’t take photographs for several years.

“By that time, I had a good amount of knowledge about how my body worked sexually and my interest in sex,” he says. “I have a broad sexual interest, so I think that’s another reason why I did self portraits because I knew I could push myself to photograph things that can be considered pornography, but the importance of the imagery outweighed me photographing myself in that manner.”

One of the photos included in the Frost exhibition is titled “Sunset at Grand Haven Beach,” which depicts Coombs being held by a man on the beach with the waves rolling in behind them.

He says the photo was inspired by the Instagram culture of people posting romantic pictures out at the beach. “I wanted to show that with my disability in mind,” he says. “I just wanted to have a beautiful image — a beautiful, romantic, intimate image like other people do.”

Another photo in the exhibit, titled “Frustration,” is a close up of Coombs in bed, his eyes rimmed with red. The photo was a result of a disappointing night out with a group of friends. “They weren’t well-versed with disability etiquette, which not a lot of people are,” he says. They were dancing outside at a resort in Saugatuck when his friends all went inside. “They heard a song and they all rushed out to the dance floor, but the inside dance floor isn’t accessible so I’m just sitting there by myself,” he says. He called his roommate to come get him. “By the time I got home I was bawling and my roommate tried to put me to bed and I said, ‘Go get my camera.’ I was thinking in my head while I’m drunk and pissed, ‘This is a really good picture.’”

He hopes people looking at the photo “can fucking realize that having a disability is just so infuriating at times,” he says.

Infuriating, but life is still absolutely worth living. On his neck, Coombs has a tattoo that reads, “Giving up is the ultimate tragedy,” which he got in 2010.

“As I was getting settled back in Grand Rapids after my year at home, my mom and I — she was with me until I got established in Grand Rapids with caregivers and everything — we were coming from outpatient and we were going down the elevator and we saw that quote at Mary Free Bed, which is the rehab hospital in Grand Rapids,” he says. “And we kind of just looked at each other and we were like, let’s go get tattoos of it.”

And so they did. “I got it on my collar bone area and she got it around her ankle. And when my dad came to visit, he got it on his bicep,” he says. “It just really resonated with everything.”

Coombs attended the opening of his “Notions of Care” on Aug. 14. “It’s my first show of all my own work in a museum, so that’s crazy,” he says.

“It felt so good to see the images how they’re meant to be. Because a lot of the time it’s just me on my computer screen seeing them,” he says. “So being able to see them at the size they are — they’re very large — on the metallic paper I print on, with the lighting and everything, to see all the detail and colors… I loved seeing them in their final form.”

“Notions of Care” is on exhibit at the Patricia & Phillip Frost Art Museum at Florida International University until Nov. 7, 2021. For more information, visit the museum’s website.