Courtney Craven is carrying on the legacy of their late partner, who was deaf

Courtney Craven was napping in the bedroom when their partner Susan Banks — in the living room playing a video game — suffered a massive stroke and died. The couple had recently launched “Can I Play That?” (CIPT), a review site designed to let people know before they drop $60 on a new game whether it’s accessible to those with specific disabilities.
Craven and Banks recruited a staff of disabled reviewers to weigh in on the newest games, building a robust online community of grateful readers. And then Banks passed away unexpectedly two years ago, leaving Craven with a legacy they weren’t sure they wanted.
“I like being behind the scenes,” says Craven, 38, who has lupus and is hard-of-hearing. “Let me be the hermit writer that does all the writing reviews. Don’t make me interact with people, Jesus. But when Susan died two years ago, it was either throw in the towel, quit the site and find something new to do, or step up and fill the role that she was in.”

From Clarkston to Chicago

Craven grew up in the village of Clarkston 40 miles northwest of Detroit, misdiagnosed with juvenile rheumatoid arthritis which turned out — decades later — to be lupus. As a child dealing with constant inflammation and pain, Craven found escape in stories — specifically, in Laura Ingalls Wilder’s “Little House” novels.
“My dad and I would go spend two weeks up at his dumpy cabin in the Upper Peninsula, and I read the whole series there,” they recall. “There’s something about the country and farm life that’s always been comforting to me.”
At home in Clarkston, they played the iconic video games Duck Hunt and Super Mario with their brother. “And then we got the cow box — the Gateway computer — and the games were so much more story-rich,” they say. “That was my thing. I wanted a good story, told to me in a way I wasn’t used to from TV or movies or books.” 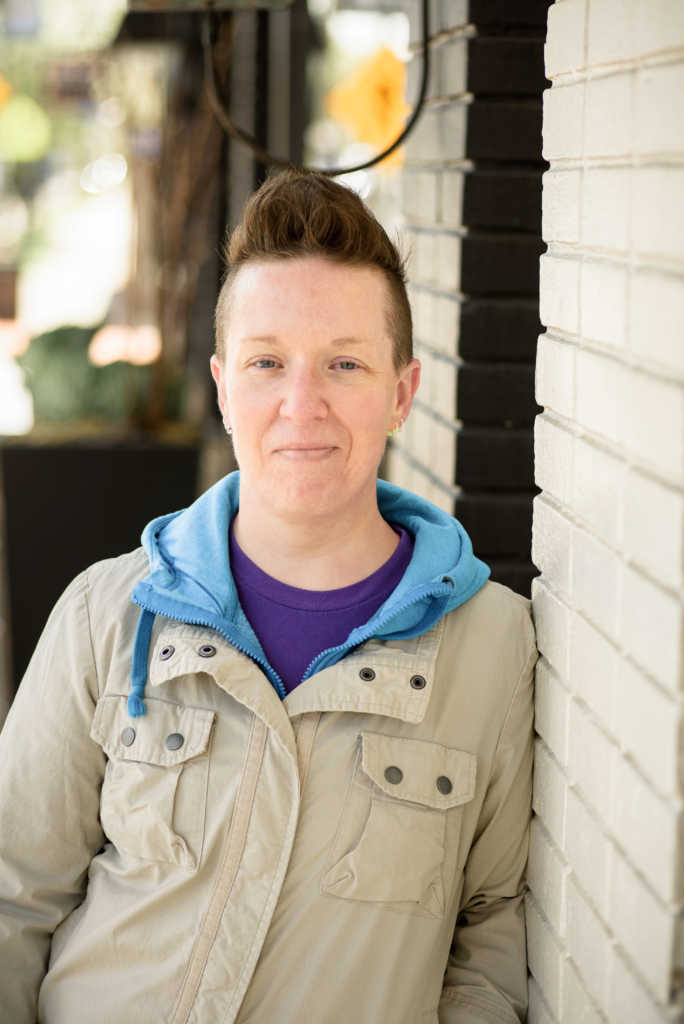 After graduating from Clarkston High School, Craven found in-person college classes at Oakland University impossible to navigate because of neurological complications from lupus. Instead, they fell into a series of low-paying jobs. While cleaning out stalls, Craven got kicked in the head by a horse. They lost hearing in one ear, and then — after a bout of West Nile meningitis — lost partial hearing in the other.
They moved to Chicago in 2010. “I needed to live somewhere I felt welcome as a queer person, far away from all the straight cis white privilege [and] ignorance I grew up surrounded by,” they explain. Looking for work, they came across a Facebook post for a dog walker who knew sign language. Susan Banks — a wealthy deaf woman who adored video games — lived in a brownstone in Chicago’s Lincoln Park neighborhood with her Boston terrier. Craven, who’d taken sign language in high school, got the job. They became friends. And then they became a couple.

In 2014, Banks and Craven purchased a game console along with the open-world role-playing game Destiny, which asks first-person shooters — playing solo or in teams — to save Earth’s last safe city from aliens. Due to poor deaf/hard-of-hearing accessibility, however, Banks was forced to quit just 20 minutes into playing.
“Susan played games for the story,” Craven says. “In games, just like in movies, the story is conveyed most of the time in dialogue. So if the captions are bad, and you’re deaf, you miss the whole thing. It might be pretty to look at, but really, what’s the point of watching a movie with no sound and poor captions?”
To help others make informed decisions before a purchase, Banks and Craven started the now-defunct blog oneoddgamergirl.net. They spent five years writing deaf/hard-of-hearing accessibility reviews. Craven had other gaming issues, as well — lupus caused their hands to ache, which made using a mouse painful and holding game controllers uncomfortable; these barriers would eventually become a key focus in their game reviews for players with physical disabilities.
The website CIPT began as a joke. Whenever they purchased a new game, Craven would play it, and Banks would ask, “Can I play that?” The answer was almost always no. Craven bought the domain name and gave it to Banks, saying, ‘Here, you can just put all the answers on this website.’” But the idea caught fire.
The Entertainment Software Association Foundation estimates that 46 million gamers in the U.S. have at least one disability. In November of 2018, Craven and Banks launched CIPT in earnest. They recruited writers with various disabilities to review games and reached out to the disabled gaming community on Twitter. Development studios around the world began to read and share their reviews and news stories. So did Xbox and PlayStation executives Phil Spencer and Hermen Hulst.
Slowly, games began to improve. Still, Banks and Craven felt the sting of disappointment when they came across an inaccessible new product. “We felt like we were making progress, making a change,” Craven says. “People were listening, you know? And then we realized, oh, okay, well, some people were listening. Not everybody cares, or knows.”
Craven was content to stay behind the scenes, leery of the online gaming community online. “Gamergate had happened in 2014, and prominent women in games were doxed and their lives threatened just because they were women who existed in this field,” they say. “I saw gaming through that lens, and I didn’t want anything to do with that toxic crap.”
But then, Banks fell ill. She’d contacted MRSA years before, which let to inter-related health problems including seizures and strokes. “She went from a perfectly healthy marathon-running woman to needing caregiving 24 hours a day over the course of two years after she got sick,” Craven says. “We always knew it was possible that she could die, but we didn’t think it would happen.”
And then, it did.

A few weeks after Banks’ death, a friend offered Craven a job writing captions for interactive entertainment company Epic Games which operates Fortnite — one of the world’s largest games. “Being able to start that job played a major role in me not succumbing to grief and depression after [Susan] died, and instead deciding to get the counseling and treatment I needed [to] stay alive,” Craven says. They took over CIPT’s Twitter feed, as well, wanting to ensure that the website remained a safe place for disabled writers to pitch, even if they didn’t feel welcome in the video game journalism industry. “Mainstream sites only cover accessibility when it’s trending. They make it pretty clear it’s of interest to them when it’s a hot topic and only then,” Craven explains.
Previously, Craven had been unaware of the large, supportive LGBTQ+ and disabled gaming communities on Twitter. These days, the platform is responsible for most of their close friendships.“Every little tweet is a story, and through them, you get to know people and yourself,” they explain. “It’s how I’ve learned everything that I’ve come to understand about myself later in life. For so long, I thought there was something wrong with me because I was asexual and nonbinary. I didn’t know these were a thing. I just thought that I was broken.”
But right as Craven began to grow comfortable with both their identity and their work as the face of “Can I Play That?,” they received an advance copy of Ubisoft’s Assassin’s Creed Valhalla and tweeted about the discriminatory language in a character description. “Ubisoft made the mistake of apologizing for it and committing to do better publicly in a reply to my tweet,” Craven says. “That started a three-week storm of angry white men sending me horrible emails, telling me what they’d do to me if they ever saw me out in public, sharing my private information across various far-right forums.”
Craven chalks up the anger to the increase in women and people of color working in, and playing, video games. The experience was similar to what happened with #GamerGate. “I think some white men are mad because they feel like they’re losing ground, and they’re acting out in the most reprehensible ways, like actually endangering the lives of the people that they hate,” they explain. 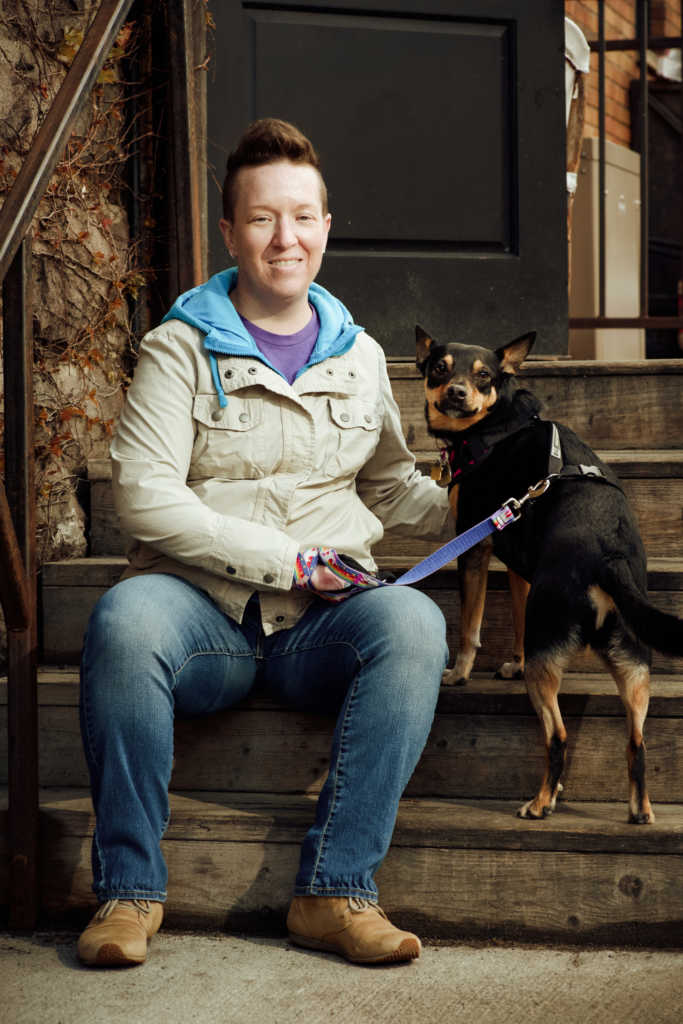 Dismayed by the doxing and the cost of housing in Chicago, longing for solitude in a natural setting, they relocated back to Clarkston. Now, when they’re not writing captions or reviewing games, they’re outside hiking with their rescue dog, Tali. “Being back here feels like home,” they say. “I know that I’m never going to be as accepted or as welcome as I was in Chicago, but I feel better here.”
They’d found themselves resenting their work writing content for CIPT, especially when jealousy surfaced within the community of disabled gamers. “People want the success we’ve had without having to do the years of work, so they lash out instead of actually wondering why CIPT has been so successful,” they explain. “Doing all that work for no money just stops being worth it, so it came down to me deciding to either shut down CIPT entirely or find a new way to make it feel good and enjoyable again.”
Recently, they’ve shifted focus, teaming up with author and inclusion educator Yi Shun Lai and disabled streamer/accessibility consultant Stacey Jenkins to deliver workshops for game studios including Ubisoft, Creative Assembly and Square Enix. Sony hired Craven as an accessibility consultant, and the director of the Game Developers Conference has invited them to present on gaming accessibility. “I love doing the workshops,” Craven says. “It’s amazing how well-received they’ve been, and just as I was hoping, I feel good and excited about CIPT again.”
Gone are the days when their work felt like shouting into a void with the occasional affirmation. Susan, they say, would approve of where the website is now. “She’d be astounded by the strides made by CIPT and the rapid embracing of accessibility by the gaming industry,” they say. “More and more women are working in games, more and more people of color and disabled people are working in games. It’s really exciting.”

About the Author: Melissa Hart

Melissa Hart is the author, most recently, of "Daisy Woodworm Changes the World" inspired by her brother who has Down syndrome. Visit her site at www.melissahart.com.