In December, Michigan-born writer and filmmaker Orion Couling, who is from Marquette, walked the red carpet alongside four actors with Down syndrome who gathered at the performing arts center in Skokie, Illinois to celebrate the world premiere of their fan-film “Gemseeker.” It’s a 17-minute homage to “Lord of the Rings,” featuring both neurotypical and neurodivergent actors.

Couling’s goal with this, his second movie, is to portray performers who are differently-abled as heroic protagonists in a multiyear collaborative process of rehearsal and filming that offers all participants dignity and autonomy.

Down syndrome is a genetic condition caused by an extra piece of one’s 21st chromosome. I grew up with a brother who has this condition, and I was eager to talk with Couling about the philosophy he incorporated into the crowdfunding campaign for his first fan film, inspired by “Star Wars.”

“When the galaxy needs heroes,” he wrote as the film’s tagline, “chromosomes don’t count.”

How did you get started as a filmmaker featuring actors with intellectual and physical disabilities?

I graduated from Northern Michigan University with a degree in theater and became a stage combat instructor and a coach for elite gymnastics teams. I longed to make more of a difference. I’d taught theater in prisons and youth facilities, and I wanted to work with communities that weren’t being represented. As a children’s theater director in a Chicago suburb, I met Sandy Pazerunas who has a daughter with Down syndrome; they’re part of UPS for DownS (United Parent Support for Down Syndrome). We began working together, and this community became my community.

Tell me about the first fan film you made, “No Easy Target,” your homage to “Star Wars” about a colony that welcomes people of all abilities and proves their worth to a violent and dismissive First Order commander thanks to the strength and resilience of actor Garrett Anderson’s Jedi and the other members of the community.

Each film we make has a theme. “No Easy Target” is about language. We did a lot of work around the R word [retarded] and why the villain used it, and how to push back on it. As Bridget Brown says as the Jedi Consular, Briga, “We are more than our outward casing . . . we are constantly judged as inferior, but like this droid here, we are so much more.”
“No Easy Target” took second place in the Cinema Touching Disability Film Festival in 2019 and screened in Tokyo, Italy and Iceland. That was rad because we had three people on our film crew, and we went up against the American Film Institute, which won first place with a film crew of 350 people. But we don’t send our work to many disability film communities because that’s not the target audience I’m trying to reach. I’m trying to reach people who haven’t seen this kind of story yet. I don’t market our work as disability films; I market it as films starring actors with disabilities. 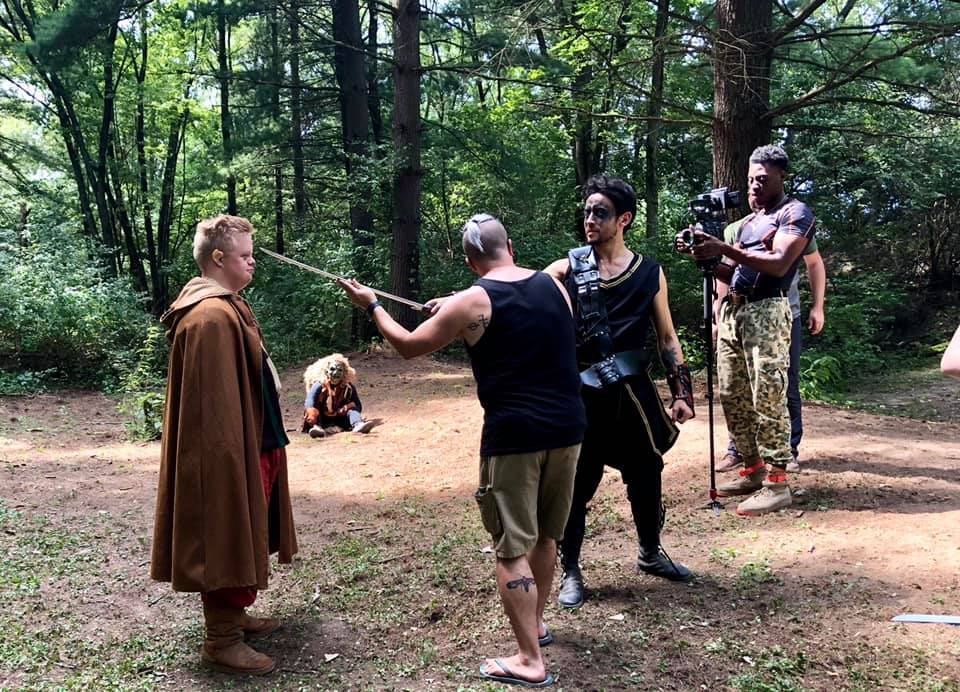 Orion Couling showing actor Nicholas Pesce and others how to fight on the set of “Gemseeker.” Photo: Eileen Pesce

Your second film, “Gemseeker,” is a short fan film inspired by “Lord of the Rings,” starring Nicholas Pesce as a gentle, wise Hobbit-like character in search of friendships that last beyond a single encounter. Tell me more.

The theme in this film is really, “I don’t need to use a bow, or a sword, or magic to be an important part of your party. What I do need to do is bring out the beauty that maybe you’re missing.” Find out what someone’s jam is, and find that mutual ground, whether it’s a dance party, or a good book, or film or a TV show, or a walk in the woods. We hope that viewers realize that whether someone has a physical disability or intellectual disability, everyone has the ability to make sincere and lasting friendships based upon mutual respect.

Did you grow up with someone who has Down syndrome?

I started out not having a personal connection, but it became very personal right out of the gate. I’ve got maybe two dozen families now whom I hold dear to my heart; we socialize outside of the theater, as well.

You’ve been working as a consultant for Kai Shapiro, the only American member of the UK company Drag Syndrome, which just appeared in RuPaul’s DragCon UK.

Kai is amazing. Between the drag and the autobiography they’re writing, their creativity is unmatched. I worked with them last year writing lyrics for the album they want to put out. We’re having so much fun.

What film are you and your actors planning next?

We want to make a Western. One of our actors is interested in cowhands, and I’m passionate about that history. We’ve started drafting a script and figuring out who has horses, and we’re scouting locations. We just need to secure funding for the film.

For more about Orion Couling’s work, visit his Vimeo channel. “No Easy Target” is available for screenings now; “Gemseeker” will be available after its 2023 festival run.

About the Author: Melissa Hart

Melissa Hart is the author, most recently, of "Daisy Woodworm Changes the World" inspired by her brother who has Down syndrome. Visit her site at www.melissahart.com.