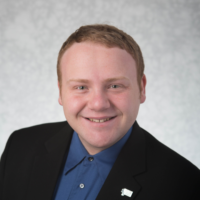 The Michigan Association of School Boards held its delegate assembly earlier this month before its annual leadership conference. Voting delegates from over 150 districts in 44 counties attended and voted to approve a pro-LGBTQ resolution to support adding sexual orientation, gender identity and expression to the Elliott-Larsen Civil Rights Act.
“This resolution was offered by Kenowa Hills Public Schools who unanimously supported expansion of the ELCRA in June and sent this to the state legislators representing parts of the District,” said Kenowa Hills School Board member Eric-John Szczepaniak in a press release. “Kenowa Hills notes that ‘[b]eing one’s authentic self is paramount in building [their] learner profile’ and remarks that their work of shaping the lives of young people in their community are severely undermined due to the continued discrimination that LGBTQ+ students and graduates still face in this state. Kenowa Hills also amended their own procurements policy in April of 2019 to ensure that public dollars are not awarded to private vendors that still discriminate on the basis of sexual orientation and gender identity and expression.”
Szczepaniak is currently Grand Valley State University’s student body president and a candidate for Alpine Township Clerk. As an openly LGBTQ politician who one day hopes to become an educator, he urged GVSU earlier this year to amend its purchasing and overall discrimination policies to contract only with vendors who are LGBTQ-affirming.
“The amendments made to the 18 resolutions and the one new resolution were adopted as proposed and outlined in the 2019 Delegate Assembly Handbook. There was one amendment made on the floor to Resolution G-5.07, Disciplinary Education Programs. The amendment added parents and guardians to the language. The resolution was then unanimously adopted,” said a MASB press release.
To learn more about the resolution visit http://masb.org.