Michigan Stuns Thanks to These Fetching Queer Murals

Behold these works of public art!

Public art murals serve many purposes. They can beautify neighborhoods, serve as political or social commentary and create visible touchstones that have the power to unite and represent the local community. Eventually, most public art in the form of murals fades over time, making way for new representations to fill the spaces left behind.

Throughout Michigan, public art murals can be found in large cities and rural areas alike, including these five public artworks featuring LGBTQ+ themes. Road trip, anyone? 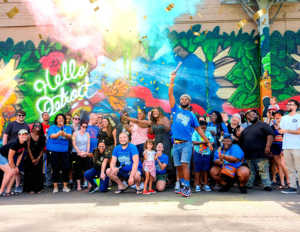 A new mural at Detroit Public Health STD Clinic features bright colors and promotes a positive vibe. “The Key to Ending the HIV Epidemic” is the end result of a vision imagined by artist Demetruis Green, Jr., who works as the PrEP coordinator at the center.

Green hopes that the mural and its focus on natural elements like flowers, fruit and greenery, combined with symbols of progress — including the Detroit skyline, gears and scientific tools — will feel inviting and welcoming to clinic visitors. He took care to incorporate elements that symbolize some of the clinic team in the piece, as well.

Approximately 1.2 million people in the U.S. are living with HIV and 13% don’t know their status, according to the CDC. Green says ending the HIV epidemic by 2030 is possible, but only through increased access to HIV prevention, treatment and support services such as those offered through the Detroit Public Health STD Clinic.

“The Key to Ending the HIV Epidemic” can be viewed at 50 East Canfield Street in Detroit. 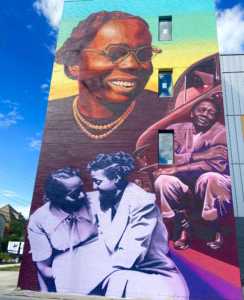 Also in Detroit is the recently-revealed Ruth Ellis mural, which features a huge portrait of the LGBTQ+ icon and activist at the corner of Woodward and Clairmount on the side of the new Ruth Ellis Clairmount Center for at-risk LGBTQ youth. The facility provides 43 housing units for young people facing chronic homelessness — especially transgender women of color. The prominent rainbow in the background of the mural represents the queer community.

The Ruth Ellis Clairmount Center mural is located at the corner of Woodward Avenue and Clairmount Street in Detroit’s Piety Hill neighborhood.

“Rainbow Road” in Grand Rapids is the city’s first street art installation. It was created by Joey Salamon in 2019 as a permanent street mural commemorating Pride Month and the 50th anniversary of the 1969 Stonewall Riots.

Salamon’s art can be found throughout Michigan in public spaces in cities like Ann Arbor, Midland and Detroit. Visit joeysalamon.art for a full list.

“Rainbow Road” can be viewed at 22 Sheldon Boulevard in Grand Rapids. 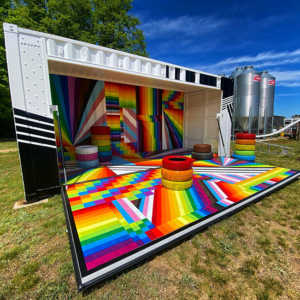 After his colorful public art installation at the Iron Fish distillery in rural Thompsonville, 30 miles south of Traverse City, was unveiled in 2021, Salamon told Interlochen Public Radio that he is drawn to creating LGBTQ+ visibility in rural areas similar to the one where he grew up. “Growing up as a gay kid in this kinda landscape,” Salamon said, “there was nothing. And so, just the fact that there is something here for anyone to see or recognize, that’s huge.”

“UP North Pride” can be viewed at 14234 Dzuibanek Road in Thompsonville. 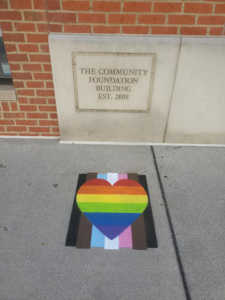 To celebrate the 50th anniversary of Pride Month and the five-year anniversary of the legalization of same-sex marriage, Flint Public Art Project painted 10 Pride hearts throughout the city in 2020.

Find the Flint Public Art Project Pride hearts throughout the city. Download the PixelStix app and search #fpap_pride for specific locations. At each stop, the app allows visitors to access videos about the history, evolution and people who have influenced the Pride movement. 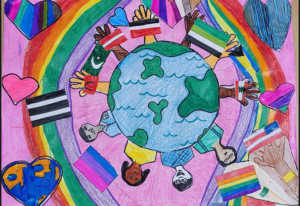 The Embracing Our Differences (EOD) Michigan organization uses the “transformative power of art” to celebrate diversity, according to the EOD website. The main exhibit in Ann Arbor’s Gallup Park includes 60 billboard-size images created by artists, writers and students from the local area and beyond, each featuring reflections on the theme “enriching our lives through diversity.” Many of the exhibits include LGBTQ+ messaging and imagery, as well as a wide array of reflections on other types of human diversity.

The exhibits can be viewed at Gallup Park in Ann Arbor, Leslie Science & Nature Center in Ann Arbor and Riverside Park in Ypsilanti.