Bipartisan legislation is being announced today by Senator Gary Peters (D-MI) that will require the U.S. Department of Veterans Affairs (VA) to update the definition of marriage to include same-sex couples.

Currently, the VA defines “spouse” and “surviving spouse” as a person “of the opposite sex,“ despite a 2013 Executive Order by then-President Barack Obama that directed the Executive Branch to cease enforcement of that discriminatory definition.

While the order resulted in the VA administering spousal and survivors’ benefits to same-sex married couples, the actual definition of who exactly constituted a spouse was never legally changed. That’s despite the Supreme Court’s 2015 ruling in Obergefell v. Hodges that the right to marry for same-sex couples is guaranteed under the Fourteenth Amendment of the U.S. Constitution.

Additionally, the bill has the support of the Palm Center, an independent research institute that studies U.S. military personnel policy.

Peters says it would ensure federal law reflects the progress made and legal protections provided in the event the Supreme Court were to overturn Obergefell, noting that the Senate has never passed legislation to formally update the VA statute to reflect the ruling and recognize same-sex veteran spouses in law.

“Every veteran — no matter who they love — should be able to access the VA benefits and resources they have earned through their service,” said Sen. Peters. “I’m proud to introduce this bipartisan legislation to ensure the VA legally recognizes same-sex marriage and does not deny these veterans or their spouses their benefits. This recognition is long overdue, and I will be working to pass this commonsense legislation in the Senate.”

The Obergefell decision in particular is believed to be in jeopardy of being overturned if the U.S.Supreme Court rules against Roe v. Wade, as is expected later this month. Roe was a key decision establishing a constitutional right to privacy, which was also one of the tenants in Obergefell.

“There’s no question we’ve come a long way in the fight for equality – but we must ensure that changing political tides or a future U.S. Supreme Court doesn’t undermine the progress we have made,” said Peters. “This legislation would make a simple update to ensure VA’s written policy matches its practice by formally recognizing same-sex marriages.”

Peters said they had taken important steps at the federal level to protect the LGBTQ+ community, including LGBTQ+ servicemembers and veterans, but that there was more work to do. 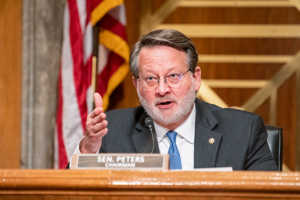 “My legislation proposes a necessary update so that the official, written policy of the VA does not discriminate against LGBTQ+ veterans and their families,” he said.

The legislation continues Peters’ strong support for equality issues, both inside and outside the military. In 2010, he voted in favor of repealing the Clinton-era “Don’t Ask, Don’t Tell” policy, which prohibited military personnel from discriminating against or harassing LGBTQ+ service members or applicants as long as they did not openly acknowledge their orientation.

At the time, Peters told Pride Source that the policy had been a tremendous waste of resources that resulted in Americans needlessly being turned away from serving their country simply because of who they are.

“During my years in the Navy Reserve, I served with many brave, patriotic and dedicated men and women who were always ready to defend their country and its citizens,” Peters said. “I was never concerned about their sexual orientation, just their ability to serve the United States honorably.”

More recently, Peters was a cosponsor of the Equality Act – which would prohibit discrimination based on sex, sexual orientation, or gender identity across the board – including in education, employment, housing and the judicial system. That bill passed the U.S. House of Representatives in March, but has yet to come up for a vote in the Senate.

Additionally, Peters is a cosponsor of the Refund Equality Act, which ensures legally-married same-sex couples can file amended tax returns back to the date of their marriage. After being introduced in 2021, the bill remains in the Senate Finance Committee.

Peters said it was among his top priorities in the Senate to end what he called “these discriminatory and outdated policies in the service, particularly when they impact the ability of veterans to access their benefits, including mental health services, essential health care, resources to obtain employment and more.”

About the Author: Jon King

Jon King has been a journalist for more than 35 years. He is also an adjunct faculty member at Cleary University. Jon and his family live in Howell, where he also serves on the Board of Directors for the Livingston Diversity Council.