Monkeypox in Michigan, Part 4 | The Community Organizer: ‘This Could Have Happened To Any Community’

Yesterday in the Pride Source series, Monkeypox in Michigan, Dr. Calandra Green described the finer points of transmission and prevention. Today, Devin O’Hara explains how a weekly bar night served as a springboard to educate the queer community in Washtenaw County about monkeypox:

Devin O’Hara didn’t set out to educate his queer peers about the latest public health emergency — but that’s exactly what he’s doing.

“I’m not a community organizer by any stretch,” said O’Hara, who is 32 and lives in Ypsilanti with his husband. “And I honestly never really thought of myself as terribly social.” But when Ann Arbor’s Aut Bar closed several years ago, and LGBTQ+ people in the area were looking to socialize, @a2gays (Ann Arbor Gays), was born. It’s a group that meets weekly at the same bar, same time, and it’s helped foster connection. It’s also an Instagram account that O’Hara said kind of fell into his lap.

Beyond advertising social events, O’Hara wondered what else he could do with the account. As the monkeypox virus spread across the nation, O’Hara had an idea. It was right around the time he learned a good friend had the first diagnosed case of monkeypox in Michigan. Announced June 29, no details were provided except that the individual is an Oakland County resident. 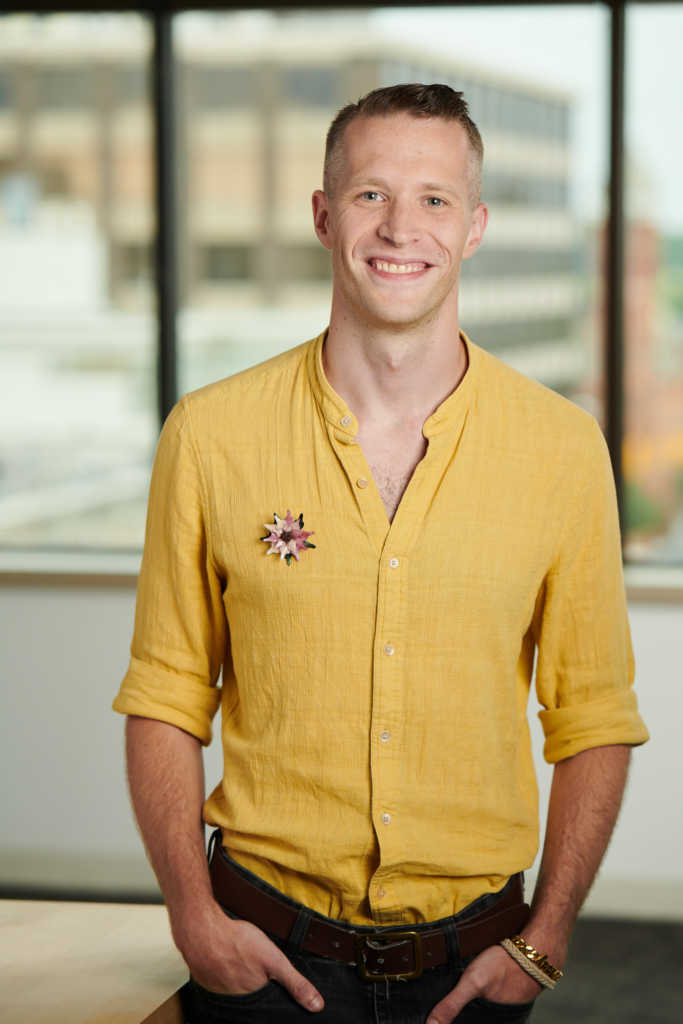 When O’Hara found out about his friend, “It really spooked me. It made the whole thing, the whole possibility of another public health crisis on the tail end of Covid, feel very real. And I was speaking to them a lot and trying to figure out what I could do about it personally, but I realized I needed to take it seriously, and that I needed to help people coming to the same revelation I did.”

O’Hara looked into the process in Washtenaw County for getting vaccinated against MPV, for his own protection as well as that of others.

“I had happened to be in contact with the health department,” O’Hara said, “and they let me know about appointments. And so I was able to get one fairly quickly, and I was also able to spread the word to a lot of people.”

To actually receive the vaccine, O’Hara called the county health department to make an appointment after determining whether he met the eligibility criteria. Criteria for receiving the vaccine is set by the CDC and based on the number of cases in an area. The Michigan Department of Health and Human Services then allocates vaccine across the state. After they established that O’Hara was in a high-risk group, he scheduled a time to get vaccinated.

O’Hara said the shot itself was no big deal.

In an email to the Washtenaw County Health Department that he called well-timed, O’Hara proposed a Q-and-A Instagram Live video on @a2gays. This was three or four weeks ago when O’Hara said reliable information was hard to come by. The person he spoke with on the phone told O’Hara they happened to be looking to do targeted communication around MPV. The Q-and-A, which streamed Aug. 1 and is still available for viewing, features the medical director of the county health department.

“It’s easy to feel sometimes when these things happen, like you’re powerless and there’s nothing you can do to create institutional change to help people,” O’Hara reflected. “And sometimes I need to kick myself in the ass and remind myself that that’s not always true, that sometimes you do have the tools to even make a small impact.”

Now that O’Hara has turned a crisis into an opportunity to educate his community, he has some advice of his own. For one thing, keep in mind how rapidly evolving the information is. It’s important to stay up to date with the latest on how the disease is transmitted and treated. Lastly, O’Hara cautioned against stigma. He was referring specifically to the notion that MPV should be categorized as a sexually transmitted disease.

Tomorrow, in part 5 of the Pride Source series Monkeypox in Michigan, the executive director of an LGBTQ+ community center talks about caring for our own.