More Than Moana: Auli’i Cravalho on Her New Bisexual Role, Her First Pride and Coming Out on TikTok

And no, she's not letting Disney off the hook

It’s still open to interpretation whether Moana is on the queer spectrum, but Auli’i Cravalho, who voiced the Disney princess, can assure you of one thing — she’s a proud bisexual. The 21-year-old actress portrays her first openly LGBTQ+ character in “Crush,” a Hulu Original Film with lesbian love at its center. Cravalho, as track-team runner AJ, plays an instrumental part — saying anything else would give too much away — in the teen rom-com about the unexpected twists and turns in high school romance.

Donning a plaid Coach coat, which she was wearing “proudly for the rest of the day on this couch” since it wasn’t hers, Cravalho talked on video about inspiring LGBTQ+ youth to be themselves, her message to major corporations like Disney when it comes to queer issues, and what about her first Pride event she’s most looking forward to.

As somebody older than you, I can say how proud it makes me to see people in the queer community be part of these movies. These movies did not exist when I was a teenager, so I can only imagine what it means to queer youth when they see not only themselves in these characters but people who are queer playing them.

Thank you. It felt really important to me, as well. I remember reading the script, and I was, for one, honored because I haven’t really played a queer role before. I do identify as bisexual, so it felt important, also, that my character was written in that way. It was really nice to have a rom-com that focused on teens that was positive and sex-positive. And also, not being focused on a coming out story, because we are so much more than just sexuality. It felt really refreshing. I was very happy to play AJ.

You’ve answered my next question, which was: What appealed to you most about this movie when you got the script?

I was just happy that it was a good script, first and foremost. But also, then I learned that the writers, Kirsten King and Casey Rackham, are also queer. And then, to top it off, our director, Sammi Cohen, is also queer. It felt so good, and after reading the script, it made sense. I was, like, “Oh, see, this is why the jokes land. And this is why the Gen Z humor is so on the nose, because we’re making fun of ourselves, and it’s funny!” 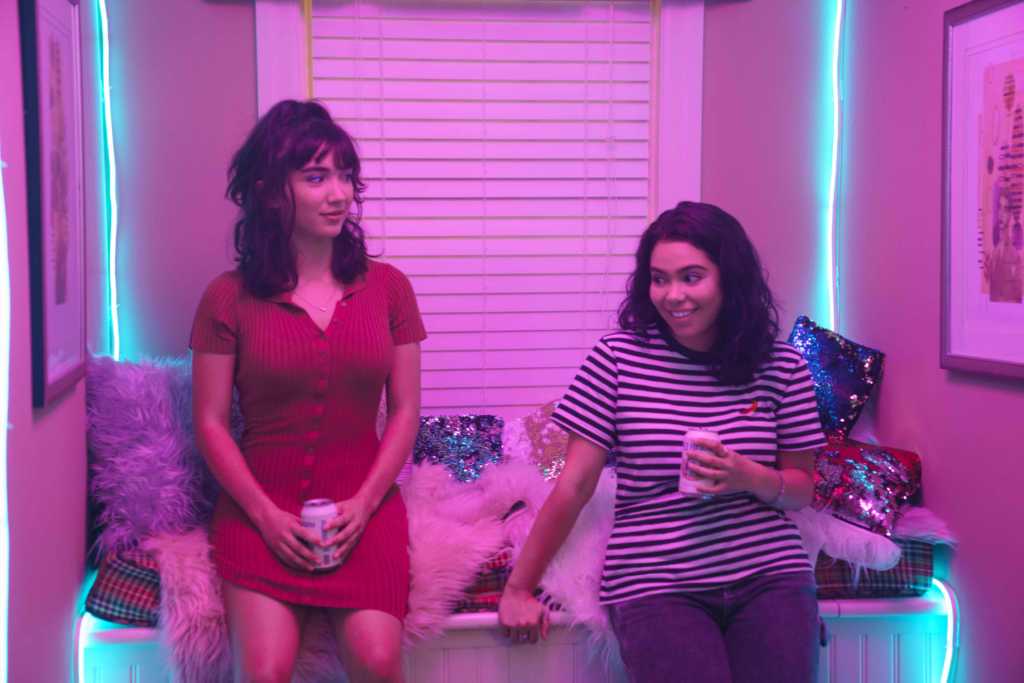 Working with so many people from the LGBTQ+ community, did you feel at home?

Yeah. It’s really fun. I mean, just to know that we are making something that I’ve learned affects how people are treated in real life. So, to show films that are more diverse, inclusive, sex-positive — it broadens our audience’s minds, and I think we all knew that.

But then, also, we’re all young. It’s a young cast, and we all got to, somewhat, [hang out] during a pandemic, because this is a pandemic film. I was skateboarding with some people because that’s what my character does, and I fell down a lot. It was just fun to be included in a cast that knew the importance of the film.

AJ is into girls, but do we know how she identifies?

Yes, we do. AJ is a proud bisexual just like me.

How do you relate to her?

I, for this role, practiced running, which is strange to say, but I did have to practice how to run. [Laughs.] I also took a few skateboarding lessons and drove myself to the skate park, and I fell down a lot. Like, truthfully, that really bruised my pride. It was important for me to do that, because that connected me more so to AJ, as someone who is a perfectionist. She wants to be on her A-game, always, in school, as far as grades are concerned, as well as with the track team. She is co-head of the track team.

Then what we come to find out is she has this really strong inclination to art, and she draws. To be a perfectionist in your art is so common, but also so damaging because, at least for myself, when I make art, I’m like, “It’s not ready yet. It’s not ready to be seen.” Sometimes I wonder if it will ever be ready to be seen. These were traits that, suddenly, I understood, because I am also a perfectionist.

In 2020, you came out on TikTok as bisexual. Did you expect that news to make the splash that it did?

It was crazy! It was in the beginning of the pandemic, when no one had anything else to talk about. And I was like, “I’m gonna lip sync this Eminem song on TikTok at 3 a.m. with my mom literally snoring in the background.” It blew up. So, that was strange [laughs].

But I never felt the need to come out. Like, you don’t have to make a really big announcement to know who you are. And, for me, that’s how it was. I’ve always known that I like girls. Girls smell good, and they are soft, and I know how to talk to girls; that’s just something that comes naturally to me. So, if anyone relates to that, that’s your coming out story to yourself. When you have that conversation with yourself, that’s all it has to be.

Do your queer fans still come up to you or reach out to you on Twitter and talk about it, and what do they say?

Yeah! They said they’re impacted that I did that. I didn’t realize the impact, but now I do. Because it’s representation, and that’s what it comes down to. It’s seeing yourself on screen and more than it was important for myself, it was important for others to know that it was OK.

Sometimes we’re just in our bubbles. For me, I’m surrounded by queer people all the time. But we have to keep in mind that some 12-year-old boy in small-town Kansas City might not have any queer friends, so the only people he has is someone like you.

Yeah, well said. And it truly is that, and I forget. I forget I’m 21, you know what I mean? To have an impact like that, it makes my heart swell. I’m truly so grateful.

What did you make of the “Moana is bisexual” headlines after you came out?

I also find that amusing. What is written and how it is portrayed, and then how the public takes it or how one person interprets it, is entirely their own. That’s what’s super special about it. A lot of movies are queer coded. A lot of characters are camp.

Representation has changed so much in the last few years, and what I love about “Crush” is that it is just casually queer. Are those the sort of queer characters that appeal to you?

I think this ties back into: I am bisexual. I identify as queer. And every character that I play, moving forward, is an extension of me. And so my vibrancy and my experiences shape how I play a certain character. So, in the future, I absolutely want to play characters that are outwardly queer. But, even if they aren’t, I think the way that I interpret scripts will always be my own. And all my characters are gonna be a little bit like this, because I’m a little bit like this. I don’t know how to say it in words.

That all your roles get filtered through a queer lens?

Yes! I think filtered through a queer lens is such a better way of putting it. Beautiful words.

There’s been talk about Disney for years and LGBTQ+ representation within Disney films,  about them falling behind and not keeping up with the times. What’s your take on that as somebody who has worked for Disney?

I think it’s really important to stand on the right side of history, now. It’s important to support people, regardless of sexuality. And support people for their sexuality, as well. And, in times such as these, when corporations are tied so directly to bills and laws, I think it is imperative that people speak up. And I applaud individuals for standing up for what is right — for walking out, for striking when it’s necessary. Because it is. Because, sometimes, we need to take matters into our own hands in order to be listened to.

So, I believe representation is very important, but also the work on the ground is just as important, and staying up-to-date and staying informed. This is the world that we live in now. And if we’re fighting for our diverse and inclusive future, then be inclusive. Put your money where your mouth is.

We’re nearing Pride, and I don’t know if you’ve ever gone to a Pride event, but, this year, how do you plan on celebrating?

I’m so excited. I’ve never been to a Pride event. But I lived in Hell’s Kitchen for a while.

Always Pride! [Laughs.] I suppose my first Pride event… I live in Los Angeles, so I’ll be there. I’ll be taking to the streets. I will find someone to give a little gay flag. One of the great things about wearing a mask is nobody knows who you are. So, I’ll be there. I don’t know if you’ll see me, but I will be there.

It’s so joyful to walk around and to scream Lady Gaga at the top of your lungs and to know that your community is surrounding you. And to watch “RuPaul’s Drag Race” on a TV in West Hollywood because it’s Pride. Like, everyone’s just playing things that are gay.

How fun to exist in that world for a period of time. And then to take that energy and throw it everywhere that you can, for the rest of the year. I feel like that’s Pride.