Though a rainy, early-June chill swept through the city of Detroit on Saturday, June 9 and Sunday, June 10, rainbow-clad attendees made it out to Motor City Pride in droves. And to first-time pride-goers like Grayson Brenner and Rose Ray, the weekend might as well have been sunny and 75 F. 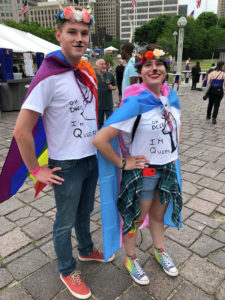 “Honestly, I’ve always wanted to be able to come to any pride event because all these people from different cultures and backgrounds just come together and kind of just find that one thing in common,” Brenner said. “We’re all part of the LGBTQ community and even just being allies we can come together and be happy with who we are.”

Ray, having traveled all the way from Michigan’s UP, said that it was worth the “really cool experience” to have such a large and diverse pride festival.

According to event organizer Dave Wait, Motor City Pride provides an annual opportunity for Detroit to foster inclusivity within both its LGBTQ and allied communities.

“Motor City Pride is a celebration of the strength and diversity of Michigan’s lesbian, gay, bisexual, transgender and queer community that is second to none,” Wait said. “It is the largest such gathering of our community in the state, and represents a unique opportunity to come together to mark our accomplishments and rededicate ourselves to the work left to do.” 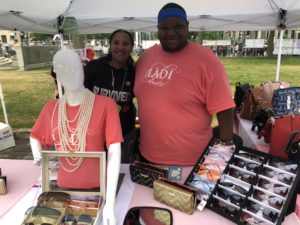 Miss Ladi Boutique is an online, Detroit-based store that sells a variety of products. This year was their first year at Motor City Pride.

And this year the event hosted thousands of guests, featured a record 140 vendors and more than 50 entertainers from across Michigan and out of state, headlined by ’80s pop icon Tiffany. And demonstrating the festival’s continued growth, were many LGBTQ-affirming businesses and organizations making their pride debut like Miss Ladi Boutique.

“Miss Ladi Boutique is an online women’s boutique. We sell clothing, jewelry, handbags and a different array of products — also some sunglasses. This is our first year. We’ve been around since November of last year, and we saw Motor City Pride online and we thought it would be a great place to go. This is our first big event that we have had,” said one of the booth’s volunteers. “We’re based out of Detroit and I’m excited about showing our products at pride, meeting new people and getting new customers.”

And of course, the festival was host to many pride veterans like Corktown Health Center.

“I’m so excited that we are able to be here outreaching to the LGBTQ community and letting them know that there is a clinic especially for this group and that we can provide care to them and support them on their journey, wherever they may be,” said Nurse Practitioner Patrice Wade-Olsen. “We’re really excited to be here and to provide really culturally competent care and expertise to this community.”

“Really it is our goal to see the elimination of health disparities along LGBTQ-identified people, families and those we serve,” added director Theresa Roscoe. 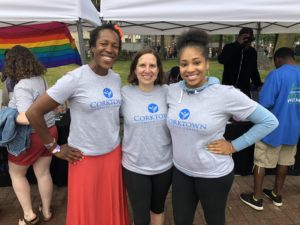 Saturday’s events started at 12:30 p.m. with performances by groups like Little Animal, Acoustic Ash and DVJ Mark. Saturday’s otherwise energetic festivities were punctuated with a poignant reminder of the 2016 Pulse nightclub shooting with a reflective vigil at 2 p.m., presided over by Metropolitan Community Church Detroit’s own Rev. Roland Stringfellow. Included in Motor City Pride’s remembrance of the event was a message board for people to write positive notes of support. Pride attendee Katie Marquette said that the deliberate look back at the tragic event served as a great reminder of the power of the LGBTQ community to band together.

“I think for the community, violence is something that is not new, and I think that event was something that really hurt us and was really painful, but it’s always really good to stop by, to read the messages. It reminds you that you’re part of the community,” Marquette said. “And even though no one here knew anyone who was at Pulse, or were there or were affected by it directly, it still hurts. It’s been two years now, and it was really cathartic. So now, I think it’s really important to not forget.”
Marquette’s wife, Ellie, added that “it’s a family thing, too.”

“A lot of people don’t have families that are supportive,” she said. “So the gay community might be your family. Yeah, we didn’t know somebody, but it’s like your family.”

And it’s likely that many other people at the festival felt the same way, like Stephanie Slate and Amber Rampson, a young couple that saw Motor City Pride as the start of a new tradition in their life together.
“She’s what brought me here. I couldn’t be happier to have her in my life and to celebrate our love here. It’s just the best feeling in the world,” Slate said.

“I’ve always wanted to come here but I never had the confidence to come here by myself,” Rampson added. “But, since I met her last year, this is about to be our ongoing thing every year. It’s something just to show that everybody’s the same and we love expressing it.”

Sunday’s events then kicked off with a bang, when at 12:30 the annual pride parade shattered 2017’s record for participating vendors by almost double and drew a crowd 25,000 strong. Overall attendance numbered almost double as much. The parade was hosted by Fiat and peppered with a variety of other known corporate sponsors like Chase Bank, Delta Air Lines and Ally Financial.

The remainder of the day was focused on performers, with groups like Killer Flamingos, The Band Mint and Marquis.

For Sean Reedy, who both attended pride and marched in the parade, he summed up the importance of this year’s pride turnout — even in rainy weather — succinctly: “I came here because I’m proud of who I am.”